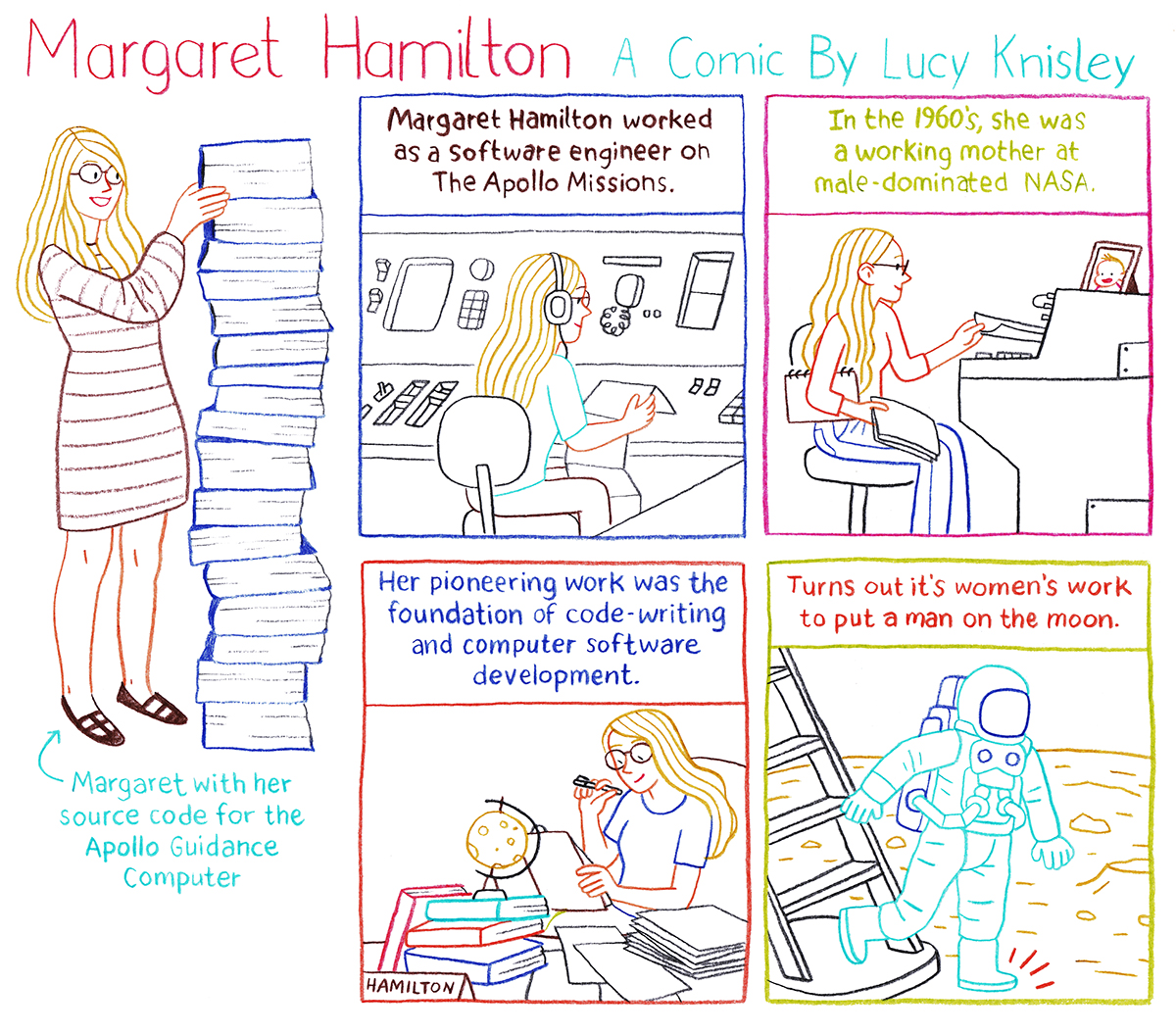 Lucy Knisley’s personal and beautiful told autobiographic comic French Milk was one of my favorite reads when it came out almost ten years ago. Since then, she has continued to create these deeply personal graphic memoirs that not only show her skills as a cartoonist but her ability to portray the human experience in a way that is both deeply personal and carries a universal need to desire human connection. If you are a fan of Fun Home and Are You My Mother, Knisley would be a great addition to your library.

Not only did she take the time this Women’s History Month to illustrate the above comic for us, but also to answer out WHM questions.

Margaret Hamilton was the subject of Knisley’s most recent collaboration with Dean Robbins for Margaret and the Moon and her next collaboration Love, Penelope comes out March 20th this year.

TMS: Where do you think we are still lacking in terms of highlighting the accomplishments of women?

Knisley: I was told, repeatedly, that making comics about the things that mattered to me would only ever matter to other women, as if that was a deterrent. Turns out, plenty of people care about the things I write about, and want to see them in the world regardless of their gender.

Knisley: For me, feminism at its core is about equality and appreciation, for the things women have done and have faced throughout history. And this is something that recognizes everyone, in an ideal world. I am so glad and heartened to this movement working towards progress, but it also means focusing on injustices for people of color, trans people– enfolding the world in the protection, recognition, and understanding that everyone deserves.

Knisley: Make the things you want to see in the world. I grew up at a time when there were few women comic book artists– What I saw were superheroes. I wanted real women to make and be in the comics I read, so I made those comics. It’s so incredible to see comics blossom into a genre that encompasses so many different experiences and authors.

Knisley: When I became a mother, I was immediately part of this… Coven? Sisterhood? Nothing really covers the weirdly chemical bond you share with other moms. Suddenly, everyone is your child, and it gives you this new appreciation for the love and effort that goes into every human person. I’m so proud of women for carrying on the human race all these generations, through sheer grit and love.

Knisley: Hermione Granger, of course. Katsa, from the Graceling book series. Most recently, Frances from The Prince and the Dressmaker. I love me a plucky, smart, young adult protagonist!

READER QUESTION: If you were trapped on a desert island and could pick one female protagonist to come rescue you, who would it be?