Why the Language Used Against James Comey Sounds So Familiar, and So Upsetting

"Why didn't you tell anyone?" 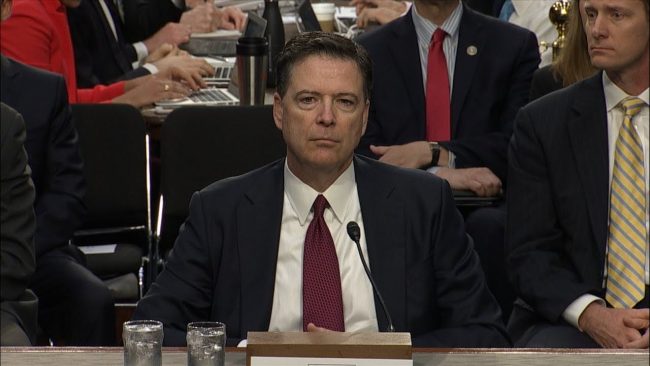 A lot happened at James Comey’s Senate committee hearing Thursday. If you didn’t watch, here’s a great rundown of everything you missed. It was an eventful few hours, for sure (well, according to most), but of everything that happened, there’s one element of the hearing that I haven’t been able to shake. And I know I’m not the only one. A lot of viewers took notice that the language being used to question a man who claims to have been pressured by the *President into dropping an investigation is disturbingly similar to language used when discussing victims of sexual assault, harassment, and domestic violence.

Political correspondent and columnist Ana Marie Cox was on the Pod Saves America podcast following the hearing, and perfectly laid out all the ways in which this language resonated. She makes it clear that harassment and abuse happen to men and women, but that these issues are disproportionately experienced by women. She guesses (and I would agree) that most, if not every woman, has found herself in a situation reminiscent of Comey’s: unwillingly or reluctantly alone in a room with a man who refuses to notice your nonverbal cues or attempts at subtle evasion. In that kind of situation, out of fear or just fear of awkwardness, saying no outright doesn’t always seem like an option, especially with a power imbalance. Instead, maybe you deflect, maybe you let the man assume you’re onboard with whatever he’s “ominously hinting” at, maybe you do whatever you can to not escalate the situation until you can get the hell out of that room.

Now, clearly Comey wasn’t fearing for his physical safety, but as Cox puts it, there’s a definite “echo of gender dynamics” here, both in that story Comey told, and in the way he was questioned. Take, for instance, Senator Diane Feinstein’s wholly inappropriate comment that he’s so “big and strong” he shouldn’t have been afraid of anything.

“You’re big. You’re strong. I know the Oval Office, and I know what happens to people when they walk in. There is a certain amount of intimidation.” She continued, “But why didn’t you stop and say, ‘Mr. President, this is wrong. I cannot discuss this with you’?”

How many women are asked why they didn’t just say “I feel uncomfortable,” especially if they’re perceived as “strong” women or feminists? Why don’t we just say no? How about fear? Shock? Power imbalances? Shame?

Then there was Marco Rubio, repeatedly re-asking the same questions Comey had already answered, about whether he ever told Trump he was being inappropriate, or if he told anyone else about his uneasiness. The implication, of course, is that Comey is either lying about it happening or lying about being uncomfortable. Because if it happened (and if you didn’t want it to happen), why didn’t you say anything, right?

The gist: if Comey was so disturbed by Trump’s take on Flynn & didn’t want to be alone w/ the Prez why did he continue private calls w/ him?

Yeah, we’ve heard that before.

Because if she doesn’t risk her job to tell her boss to stop saying things that make her uncomfortable, she’s cool with it, right Bill? https://t.co/Q7MmWxsQnC

Comey’s response will probably sound familiar to anyone who’s ever found themselves in a similar situation. “I don’t know,” he says. “I think, as I said earlier, I think the circumstances were such, I was a bit stunned and didn’t have the presence of mind and I don’t know–I don’t want to make it sound like I’m Captain Courageous–I don’t know whether if I had the presence of mind, I would have said, ‘Sir, that’s wrong.” He repeated, “I don’t know whether I would have. In the moment, It didn’t come to my mind, what came to my mind is be careful what you say and so I said, I agree Flynn is a good guy.” That might not sound like a good enough answer if you’ve never experienced that kind of shock and discomfort and possibly fear. But it’s incredibly honest.

Sen. Susan Collins, in fact, said she was “puzzled by [his] response.” She tells him “Your response was I agree that Michael Flynn is a good guy. You could have said, Mr. President, this meeting is Inappropriate, this response could compromise the investigation. You should not be making such a request.” People hearing about your experience always know exactly what you should have done, don’t they?

And the echoes here weren’t limited to the hearing itself. In analyzing it, the similarities between Comey and a victim of violence continue. Paul Ryan dismissed Trump’s actions by saying “he’s new at this.” He’s new to government, he didn’t know, he’s didn’t mean anything by it. Cox pointed out this is all too similar to the “boys will be boys” excuse. It’s locker room talk. They’re sorry if you were offended. These are all things we’ve all heard, and they place the burden of benefit of the doubt, of reading intentions, on the victim.

Again, the experiences of Comey and those of victims of abuse and assault are not the same. But it’s striking how similarly we discuss them. When discussing encounters like these, especially when based on intangibles like intimidation and coercion, and even more especially when large imbalances of power are involved, it’s important to note how quickly those investigating the incident slip into this very specific type of victim blaming.

we have a long history of victim-blaming baked into our legal system and this was just another example. Not about Comey. About Qs.

Victim-blaming isn’t inherently gendered, either. You can see in those quotes above, a number of female Senators also used this language with Comey. Nor is exclusive to one political party. The impulse to deny, to say this person’s experience was wrong or even a lie, has been ingrained into all of us. But we don’t always notice how deeply until we see it from another angle.