Comet ISON Could Give Us a Pretty Good Light Show, If the Sun Doesn’t Tear It Apart

Maybe the sun is just jealous of other balls of light in the sky? 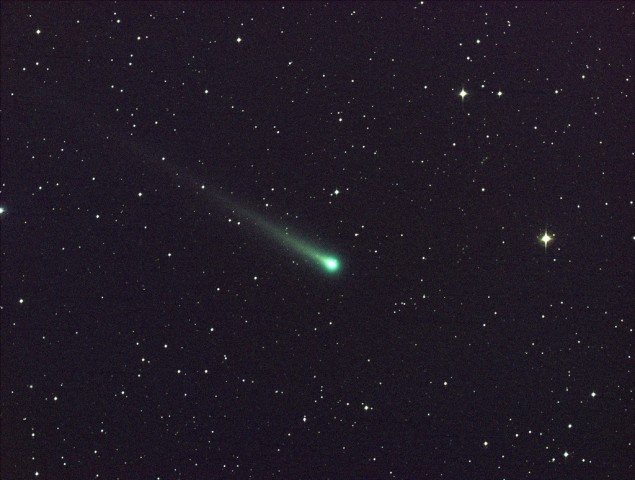 The comet ISON has been hurtling through space for over 4 billion years, and on Thanksgiving, it will get so close to the sun that it temperature will reach 5,000 degrees, which is hot enough to melt iron. At that distance, it will also be exposed to the sun’s powerful tidal forces, which may rip the relatively small comet apart completely.

ISON began brightening last week as it drew closer to the sun, and if it manages to hold together, it should give us a nice, easily visible sight in the east-southeast, pre-dawn sky all the way through January. Then, its path around the sun will fling it out of our solar system forever, which is pretty neat. Most space objects we see are stuck in orbit, so we’re excited to get so close to something that will fly off into deep space.

If it can’t withstand the incredible forces at such a close distance to the sun, the comet will go out in a brief blaze of glory and disappear forever, which is kind of why we haven’t been excited about it until now. No one was sure exactly what it was going to do or if there’d be anything to see, but at the moment, it’s starting to get interesting.

Not many comets that get as close to the sun as ISON live to tell the tale, as Seth Jarvis, director of the Clark Planetarium, points out, “It’s rare that we see a sun grazer that’s significant enough in size that it has a good probability it will survive, but that’s the cool stuff, that we’re not sure what’s going to happen.”

We’re a little surprised that the unknown is that exciting to Jarvis, as he told the story of comet Kohoutek in 1973, which cost him his girlfriend at the time. No, the comet didn’t beam her up to an alien mothership; she didn’t appreciate being dragged out of bed early in the morning to see what wound up being a complete dud of a comet, and that was the end of that. So, you know, wake uninterested significant others at your own risk.

If you like space and seeing amazing things in the sky and taking pictures of said amazing space things, you can get involved in NASA’s comet ISON observation campaign. We’ll be crossing our fingers and looking up in the wee hours hoping to see something good. Come on, ISON. Hold together.