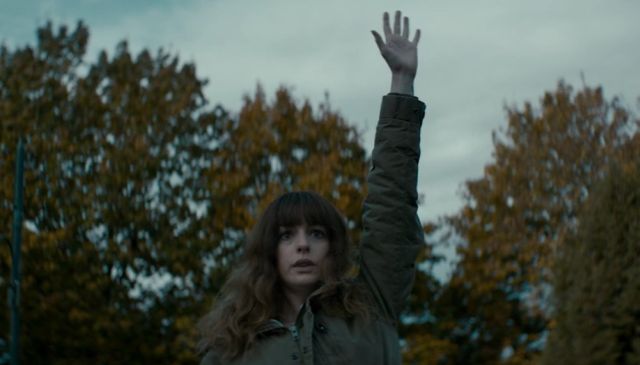 In Nacho Vigalondo’s new film, Gloria (Anne Hathaway) is an unemployed writer struggling with alcohol addiction. Her boyfriend Tim (Dan Stevens) kicks her out of his apartment in an attempt to deliver a reality check. Gloria returns home to do some soul searching, but her behavior doesn’t change until news breaks about a giant monster laying waste to Seoul. Later, Gloria begins to suspect there’s a connection between her drunken behavior and the monster.

However, this movie has a lot more frightening things in it than kaiju. After moving into her empty childhood home and struggling with a metaphor-laden faulty air mattress, Gloria runs into her childhood friend Oscar, played brilliantly by Jason Sudeikis. Oscar appears, at first, to be a lovely combo of boy next door and denim-clad knight in shining armor as he gives Gloria a ride, a job, and a rag tag group of friends. But his gifts and his not-so-nice-guy behavior escalate quickly. He gives her a TV. A couch. Free drinks. Lots of free drinks.

But even as these things develop he does not seem like an actual antagonist—yet. Sure, he flies off the handle when his friend Joel tries to kiss Gloria, but he wasn’t aware that Gloria was interested in him, right? He was probably just defending her. Sure. But any time Gloria doesn’t do what Oscar thinks she should (declining a drink, seeing her ex, sleeping with Joel), Oscar’s true colors show. As his behavior escalates, he becomes scarier than any giant monster could be.

But, spoiler alert, he is also a giant monster. Actually, a giant robot. Yes, whatever mechanism makes Gloria appear as a kaiju in another hemisphere affects him too. And when he discovers this, he has a whole new set of tools to use to intimidate and strong-arm Gloria into being who he wants her to be.

That’s a lot of intense emotional content for a giant monster movie but it works. Entirely. The laughs are real and the action is great, but what makes this film such a standout is that all the characters—including and especially Oscar—are so three dimensional.

Even when we see him manipulating, threatening, and abusing Gloria, Oscar still tries to justify his unjustifiable actions. He “aw-shucks” his way through apologies, and Gloria—like so many women who find themselves in an abusive relationship—believes him, works with him, even tries to change him. And when that doesn’t work and she’s finally ready to fight him, she encounters a human viciousness more intense than she thought possible.

As both the film’s interpersonal and larger-than-life tension builds we see all the destruction the main characters’ addictions (hers to alcohol and his to power and control) have wrought. We see this in their own lives and in the streets of Seoul where their battles play out on a epic scale. Gloria finds a way to be powerful enough to escape this relationship and be her own woman (and monster) in an ending that’s as thrilling and provocative as it is satisfying.

Colossal works as a film, but hidden in its action-packed fun are important messages, ones that I hope will be seen by a wide variety of people who will learn to see the warning signs of abusive relationships. People who aren’t one of the one in three women (or one in four men) who have experienced domestic violence might not understand how someone can become trapped in a bad situation.

In real life, just as in the film, most eventual abusers seem very charming at the beginning of a relationship. And this charm is a key tool in their power games: “The loving, kind, sweet act they put on for you is a primary tactic they use to maintain the control they’ve taken. Moving back and forth between the good and bad behavior is an intentional manipulation tactic that plays upon your desire for them to return to the good behavior.”

I hope a million, gazillion men and women see this movie and think of it the next time someone pressures them to have another drink, or shows up with an apology couch, or says that if you leave them someone will get hurt. Maybe you. Maybe them. Maybe innocent bystanders in South Korea.

By showing all these dynamics in such a relatable way, by putting them into an inarguably fun movie with giant monster battles in it, this message will reach people that might not know to go looking for it. Nacho Vigalondo has made a film that will certainly entertain and may just save someone’s life.

If you or someone you know needs help, or thinks they are in an unhealthy or abusive relationship you can contact the National Domestic Violence Hotline by calling 1-800-799-7233 | 1-800-787-3224 (TTY) or chat online at their website.

Felix Morgan is an author, online dating consultant, and journalist. Her favorite movies usually involve any combination of blood, monsters, strange weather, and musical numbers. She has an *almost* doctoral degree from Texas Tech University where she specialized in research on fandom and viewer relationships with fictional characters. She lives in Austin with her two warrior-princess-ninja-superhero daughters and some other wild animals.