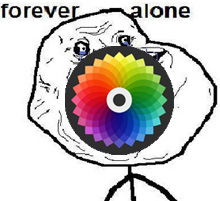 Ambitious/terrifying/insanely well-funded mobile social photo app Color has taken a beating in the tech press since its recent launch, though as we laid out in our post on the subject yesterday, we think the founders of the company and the investors who gave them $41 million probably know what they’re doing, even if the app as initially unveiled doesn’t turn out to be the endgame.

Color’s detractors do have a good point, however, when they note that the app currently has the same problem that many social apps experience upon launch: Without a robust network of existing users, new users can feel like the app is a ghost town and not want to use it again, which isn’t helped by the emptiness of Color’s current UI when there aren’t enough nearby geotagged pictures to fill in the blanks.

To this end, Color co-founder and CEO Bill Nguyen says that his team is already hard at work on an update to the app, perhaps the most important part of which will be that its 150-foot radius for photo-viewing, perhaps initially designated with too urban-centric a mindset, will become variable based on the population density wherever the user happens to be.

The first change is a pretty significant one; if you launch the app in the middle of nowhere, you’re essentially going to be locked out. This is designed to prevent you from opening the app and simply having nothing to do or see.

The second update should prevent that scenario from occurring too often. Nguyen says the app will dynamically calculate the distance required for somebody to be considered “nearby.” Currently, the app searches for anybody within 150 feet of your location. That number will not be a constant any longer: “We’re going to start adjusting that range based on the density of cities,” he says.

For example, cities like Tokyo and New York won’t require a lot of calibration, but Color may determine that your “dynamic network” has a radius of half a mile, especially if you live in a spread-out city or smaller town. The exact distance will be determined on-the-fly, like many of the app’s other core features.

These changes should hopefully take place as soon as next week.

Meanwhile, even if you think the app still stinks, Henry Blodget points out that Color isn’t necessarily doomed: With a “fat startup”-sized fund already amassed and such a brain trust assembled on staff, even if they scuttle this app and iterate to new ones, they still have a shot at capturing at least one of the various buzzwords among mobile/social/photo/coupon/gameification baked into their current ambitious plan.