The wait is over. Everything you ever wanted to know about Call of Duty‘s new social-networking, stat-tracking, DLC-content-delivering service, Elite, is now known to the public. Where do we start? For the sake of background, let’s cover some of the features. Elite will allow users to track all kind of in-depth stats like weapon analysis, personal leaderboards, perk and screenshot sharing, advanced clan support and even video coaching in the form of tips and tricks. It also comes part and parcel with forthcoming MW3 DLC, all for the low, low price of $50.

Is that such a low, low price? When Elite was announced, we were all assured that it would cost less than the “fees for comparable online-entertainment services,” and to a certain extent that seems to be true. That’s cheaper than a year of Xbox Live, PSN Plus, or Netflix, but the thing is that Elite gives you MW3 and nothing else. When you take the variety of content into account (or lack thereof) the comparability to other online services kind of dies down. Still, if you take your Modern Warfare extremely seriously, this pack will have things you’ll want, and if you were going to get the DLC anyway, you might as well pick up the rest of the perks by purchasing Elite. Just beware, once they start getting you to subscribe to things, they’re going to keep trying to do it over and over again.

If that wasn’t enough, Modern Warfare 3 is getting its own specially designed Xbox 360 model too. Check out a picture below. 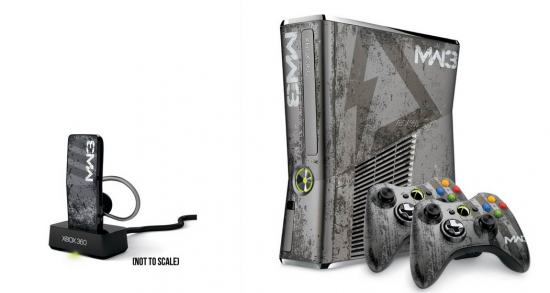