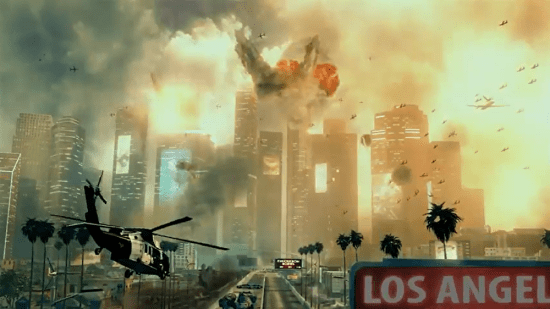 There’s a new Call of Duty game coming, and it’s Black Ops 2. If either of those things surprise you, you probably aren’t a big fan — or even a big detractor — of the series. It’s easy to pick on Call of Duty for churning out fairly similar sequels year after year after year, but they’re popular and sell well, so who could blame them? Call of Duty Black Ops 2, or CODBLOPS2 (pronounced “cod blops”), actually seems like it’s taking a few tenative steps in a few interesting directions. First, with a 2025 setting, this is the furtherst Call of Duty has ever ventured into the future. Second, for the first time in the series, player actions will have an effect on the story.

The game’s venture into nonlinear territory is especially surprising, but seems to be restrained enough to make sense in the Call of Duty world. Changes in the story are said to be affected by player choice at certain watershed moments, and also player skill, implying that characters can live or die — and missions can fail and succeed — depending on the player’s proficiency. Game director Dave Anthony assured Polygon that these forks in the road won’t be trivial and will drastically affect the game’s outcome. Whether or not that’s anything beyond a standard good-ending-bad-ending pair remains to be seen.

In the meantime, the reveal trailer pretty much sums things up. This is a Call of Duty game. There will be shooting. There will be exploding. It will be crazy. If you like Call of Duty games, it doesn’t look like CODBLOPS2 will turn you off to them. If you don’t like them, it probably won’t change your mind. But that’s up to you to decide. So go ahead, check out the trailer below, and make a guess.