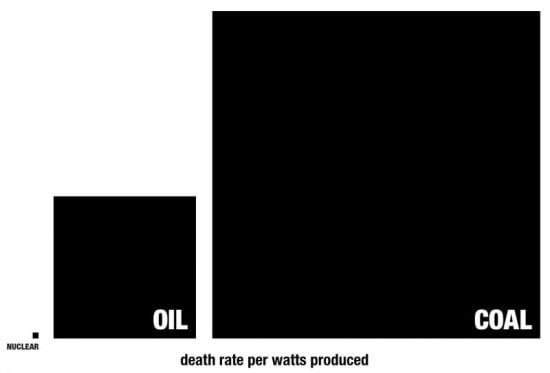 This striking statistic and chart comes from this well-sourced Next Big Future article (interactive data visualization available here), which places the average number of deaths per terawatt-hour at 0.04 for nuclear (this takes Chernobyl into account), 36 for oil, and a whopping 161 for coal worldwide. The death rate per TWh of coal is even higher in China, at 278. (A terawatt-hour is the amount of work done by one terawatt of power expended for one hour of time.)

The deaths from traditional fuel sources are generally not as high-profile as those from nuclear energy — particularly the one million deaths that the World Health Organization estimates occur each year due to coal-related air pollution. But this only serves to illustrate the tendency of people — and the media that feeds that tendency — to focus on the high-impact and low-probability rather than the pervasive and pernicious.

(Next Big Future and IBM via Seth Godin via clusterflock)