Why Does Rick Santorum Still Have a Job at CNN?

CNN Is Going To Get Rid of Rick Santorum, Right? 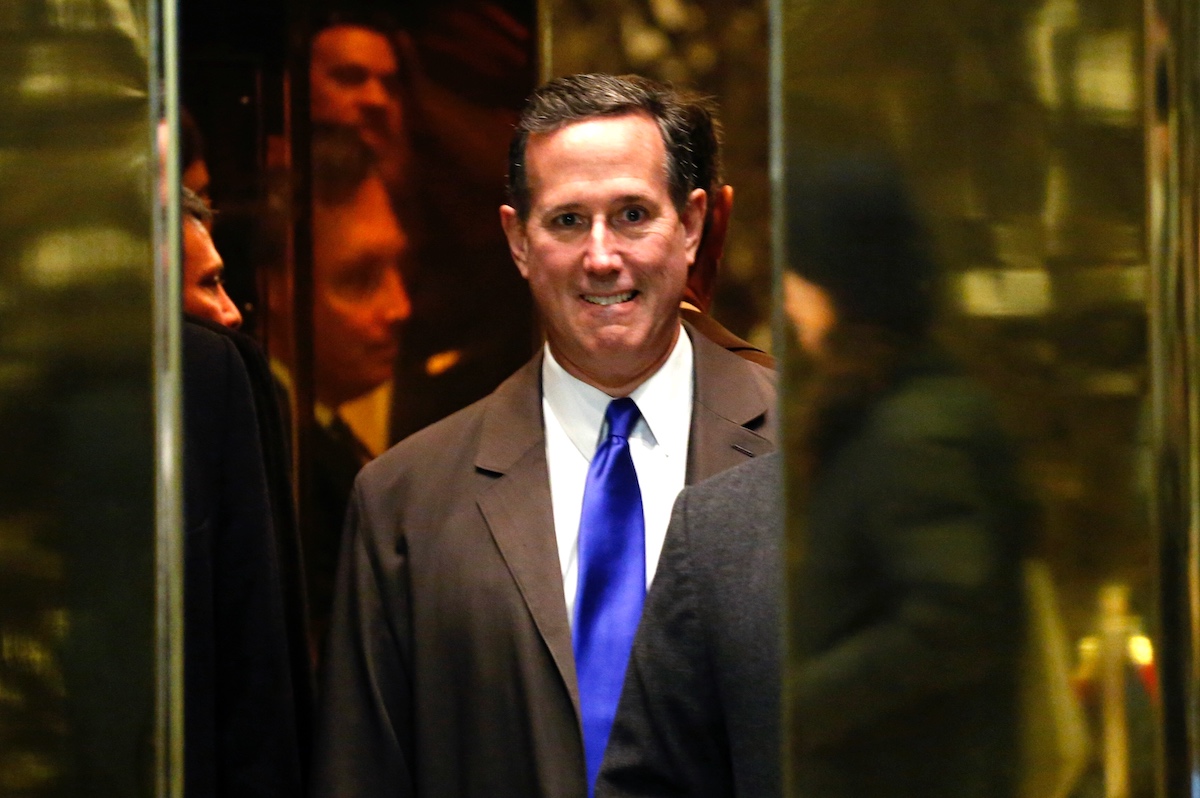 Last month, former Republican Senator Rick Santorum spoke to the ultra-conservative youth organization Young America’s Foundation at their “Standing Up for Faith and Freedom” summit, during which he exercised the freedom to spout utter racist ignorance.

Santorum told these young people that while most cultures around the world developed over time, America just sprang into the world fully formed.

“We came here and created a blank slate, we birthed a nation from nothing,” Santorum said.

Santorum’s framing here—that white Judeo-Christian colonizers are at the center of “American culture”—is, I’m sure, right in line with the ideology of this particular youth summit. But even if you buy into that image of American culture, the complete erasure of Native American influence on white America is just staggering.

The erasure of Native people and histories — which existed before and survived in spite of a white supremacist empire — is a foundational sin of a make-believe nation. https://t.co/jfoxoVSVSz

Rick Santorum is just saying what the majority of Americans silently believe—the only “real history” is US history. Everything centers around it. Many claim to appreciate and respect Native history yet know nothing about it. Lets not act like he’s some lone wolf out there on this https://t.co/noFg411HfW

In addition to being a former senator, Santorum is also a paid political commentator with CNN. And a lot of people are questioning why that is.

Hey @CNN how many Native Americans political commentators do you have?

Since you give a platform to ppl like Rick Santorum—whose entire career is based on scoring political points by taking cheap shots at LGBTQ folks, ppl of color and now Native Americans.

Calls for Santorum to be cut from CNN’s commentator pool have been growing but so far, the network hasn’t responded.

But on Monday of this week, Santorum returned to the network as a guest on Chris Cuomo’s show. Cuomo asked Santorum about his comments and the former senator didn’t apologize, but instead said his words were taken “out of context” by “the social media world.”

(For the record, they were not. You can watch his entire speech if you’d like to see for yourself, with his erasure of Native cultures starting around the 20-minute mark, not that I recommend subjecting yourself to that or giving the video any more views.)

Santorum also told Cuomo that he “misspoke” before immediately going on to repeat his claim that Native cultures didn’t have any impact on American culture. He tries to clarify by saying he was just talking about the “founding of the country” from the colonies through the writing of the Constitution.

Except 1) That’s not what he said to those young rightwingers, and 2) Even if it were, it’s historically inaccurate! The Founders and the Framers of the Constitution were absolutely influenced by the systems of tribal governance that they’d seen, and Santorum’s ignorance doesn’t make that any less true.

In an interview with HuffPost, Interior Secretary Deb Haaland (formerly one of the first two Native American women elected to Congress along with Rep. Sharice Davids) called Santorum’s ignorance “unfortunate.”

“It’s unfortunate that, first of all, that perhaps we haven’t done a good job of educating Americans about Indian history, because Native American history truly is American history,” Haaland said Tuesday. “When we think about the influence that Native Americans have had on the forming of the United States, right? The U.S. Constitution is based on the Iroquois Confederacy. Native Americans from some tribes here in this country have some of the oldest democracies in the world.”

“I cannot believe the first words out of his mouth weren’t ‘I’m sorry, I said something ignorant, I need to learn about the history of this country,'” Lemon said during the handoff between Cuomo’s show and his.

“Because I was sitting in my office, furious, because he’s done it so many times! So many times, and it was just so egregious and insulting,” he said, visibly flustered by his own rage.

Don Lemon tears into Rick Santorum for not apologizing for his Native American remarks on CNN tonight.

Cuomo tried to offer excuses and Lemon was having none of it. He wasn’t even hiding his frustration, just sighing heavily over Cuomo.

Don Lemon is really in no mood for Chris Cuomo’s excuses on Rick Santorum.

“We are not getting anywhere… We got to go because we are not going to agree.”

Lemon: “I got a solution, anyway, not my decision. Thank you, see ya later!” pic.twitter.com/lkxSqeqxdw

The exchange did not end well.

At one point, Cuomo told Lemon he has to find a place to “put your pain.”

Cuomo then accused him of just “echoing the outrage” and trying to “censor” Santorum, at which point Lemon seemed to fully realize that there was no point in continuing the conversation.

I can’t believe we have to say this as often as we do, but not offering someone a paid position on cable news is not censorship!

We’re still waiting for CNN to respond to the very public criticism of Rick Santorum. In the meantime, the Native American Journalists Association has issued a statement urging its members not to pursue positions at the network.

With a lack of accountability or ethics around multiple racist and insensitive comments from CNN staff, the Native American Journalists Association urges its members to avoid working with the network to avoid harassment and racism. NAJA also calls on advertisers, funders and journalism diversity organizations to withdraw their support from CNN indefinitely.