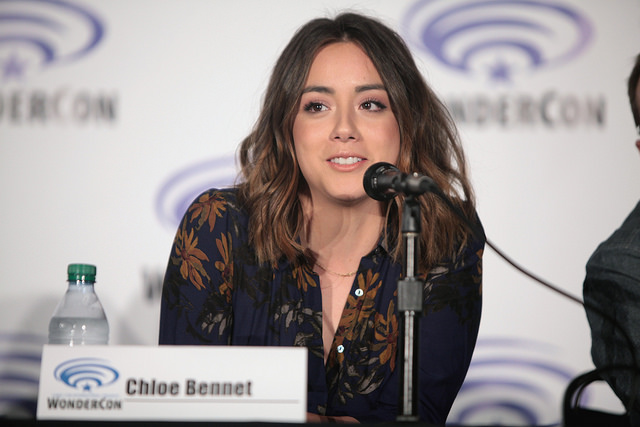 If you watch ABC’s Agents of S.H.I.E.L.D., you know that they frequently allude to, or even incorporate, elements of the Marvel Cinematic Universe. But is the reverse true? Not really.

You may have noticed that although Phil Coulson is alive and well on Agents of S.H.I.E.L.D., he wasn’t in Age of Ultron. So, is he alive everywhere, or only on television? In a Q&A with the Oxford Union, Joss Whedon explained that in the case of Ultron, it was difficult enough to introduce all those new characters without having to also explain, Oh by the way, Coulson’s alive. So, it’s no secret that to the Marvel Cinematic Universe, the Marvel television universe and the comics aren’t as big a priority as Marvel would like us to believe. Well, there’s at least one member of the Marvel television universe who wishes it were.

According to io9, S.H.I.E.L.D.‘s Chloe Bennet talked about the disconnect between the films and her show during Wizard World Des Moines this weekend, saying:

I don’t know. People who make movies for Marvel, why don’t you acknowledge what happens on our show? Why don’t you guys go ask them that? Cause they don’t seem to care!

And when a fan asked her if she’d like to take part in the MCU, she said she’d love to, but that it’s unlikely:

The Marvel Cinematic Universe loves to pretend that everything is connected, but then they don’t acknowledge our show at all. So, I would love to do that, but they don’t seem to keen on that idea.

So yeah, we love that Sif appeared on the show, but what about Daisy, or Fitz, or Simmons appearing in Thor: Ragnarok or Captain Marvel? What makes it even more frustrating is that Agents of S.H.I.E.L.D. and the MCU are all a part of the same corporate family. Disney owns both Marvel and ABC. There’s no reason why there can’t be more crossover!

Whom would you like to see make the jump from the small screen to the big screen? Tell us below!