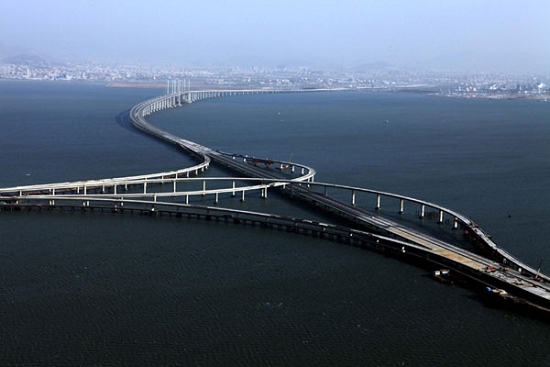 In the words of Buzz Killington, “Who here likes a good story about a bridge?” Specifically, the Qingdao Haiwan Bridge, which, now that it is completed, happens to be the world’s largest over-water bridge. Located in China, the twenty-six mile bridge cuts across the Jiaozhou Bay and connects the city of Qingdao to the suburb of Huangdao.

Though Chinese officials claim the bridge can withstand the impact of a 300,000 ton vessel, typhoons, and even a magnitude eight earthquake, Chinese tax payers aren’t too pleased with the bridge, considering it supposedly only alleviates twenty minutes from their daily commute.

Coincidentally, the Qingdao Haiwan Bridge may not be so special in five or so years, as a thirty-one-mile-long over-water bridge has been under construction in China since 2009, connecting Hong Kong to the Chinese mainland, projected to be completed in 2016.