Who Knew Chewbacca Was So High-Maintenance? 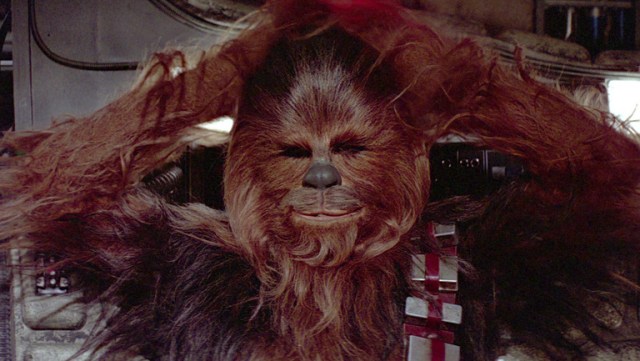 How is it that I have never thought about Chewbacca’s hair routine before?

Wookiees are literally covered from head-to-toe in fur, so it makes sense that there would be some maintenance involved in keeping Chewie looking as sleek and majestic as possible. But did you know that it’s someone’s job to actually tame all that wild Wookiee fur?

In an interview with Allure, Maria Cork spoke about her job as supervisor of the hair department in creature effects for Star Wars: The Force Awakens—meaning she’s the one who gets to run a brush through that walking carpet. Considering that each Wookiee costume is over seven-and-a-half-feet tall, this is no easy feat.

There’s no denying the hilarity, but now we know that Chewie prefers everything from a curling wand (something Cork and her team used on the suit to make the fur look as natural as possible) to a special hairbrush used to get out all of the knots that come from running around, co-piloting the Millennium Falcon and otherwise helping to save the galaxy:

To combat a unique problem called “Wookiee butt” (the snarls caused by repeated rubbing of Chewy’s pouch on his hip), Cook and her team used a Tangle Teezer hairbrush (“The bright-pink one!” she says) to carefully brush out each knot.

Oh, Chewie. You know Han will never let you hear the end of this.