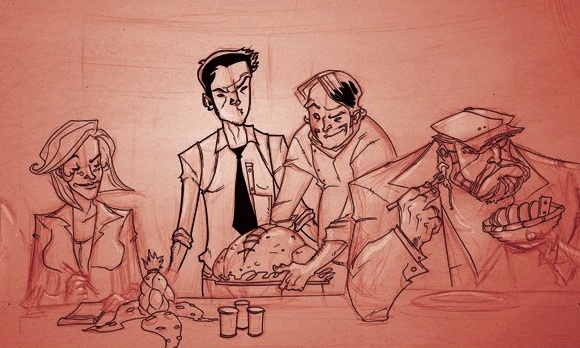 Showtime has acquired the rights to develop a new series based on Chew, the super gory, Eisner-Award-winning comic book series by John Layman and Rob Guillory. In the world of Chew, fear of avian flu has gotten so bad that the consumption of poultry is outlawed, chicken speakeasies abound, and the FDA has FBI-like powers. The story follows Tony Chu, an agent for the U.S. Food and Drug Administration who is also a cibopath, meaning that when he bites into anything (or anyone), he receives glimpses of its past.

Yes, he is a confirmed local-vore vegetarian and supporter of organic food.

According to Deadline, it will be a “quirky half-hour cop show” written by Terri Hughes Burton and Ron Milbauer and directed by Stephen Hopkins (24, Californication). Not only that, but the whole production is coming from the same company that brought us The Walking Dead, Circle of Confusion. Now, about that casting …

Obviously it’s a little early to sound the racebending bell until actual casting happens, but this is a great opportunity for television to get an Asian actor in a title role, and hopefully, that will actually happen. Unless Tony Chu magically becomes a white guy. With this crew, I think there’s every reason to believe that they will cast an Asian actor. Especially since it will be so incredibly, blatantly obvious if they don’t.