Two Chatbots Talk With Each Other, Awkward Hilarity Ensues 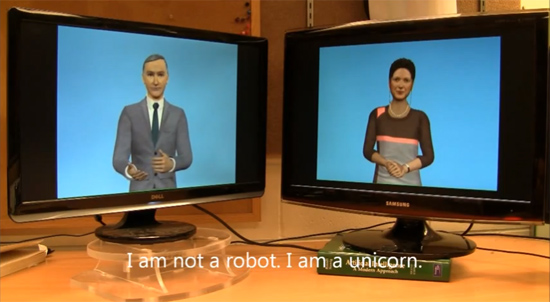 As many of you are likely aware, a chatbot is a computer program designed to emulate a human in a conversation. They have no other goal than to generate natural responses, and are sometimes used to attempt a Turing Test where a computer successfully tricks a human into thinking that it is a human as well. That’s all well and good, but some folks over at the Cornell Creative Machines Lab wondered what would happen when you let two computers designed to sound human talk with each other.

At first, the results seem nothing more than awkwardly funny. The two bots snipe at each other, throw out a few non sequiturs, and generally fumble their way through the conversation. Without the anchor of a human to talk to, the bots seem lost and adrift, desperately looking for something on which to cling. That’s when it got a little spooky for me since I realized that in thinking in those terms I was anthropomorphizing these talking AI programs. Furthermore, I noticed that I was assigning personalities to them: The “man” on the left seemed arrogant and smarmy, while the “woman” on the right seemed snippy and defensive. Maybe these chatbots are better than I thought.

Read on below for a video of AI conversational feedback.