Dwarf Planet Ceres Has an Ocean Beneath Her Rocky Surface 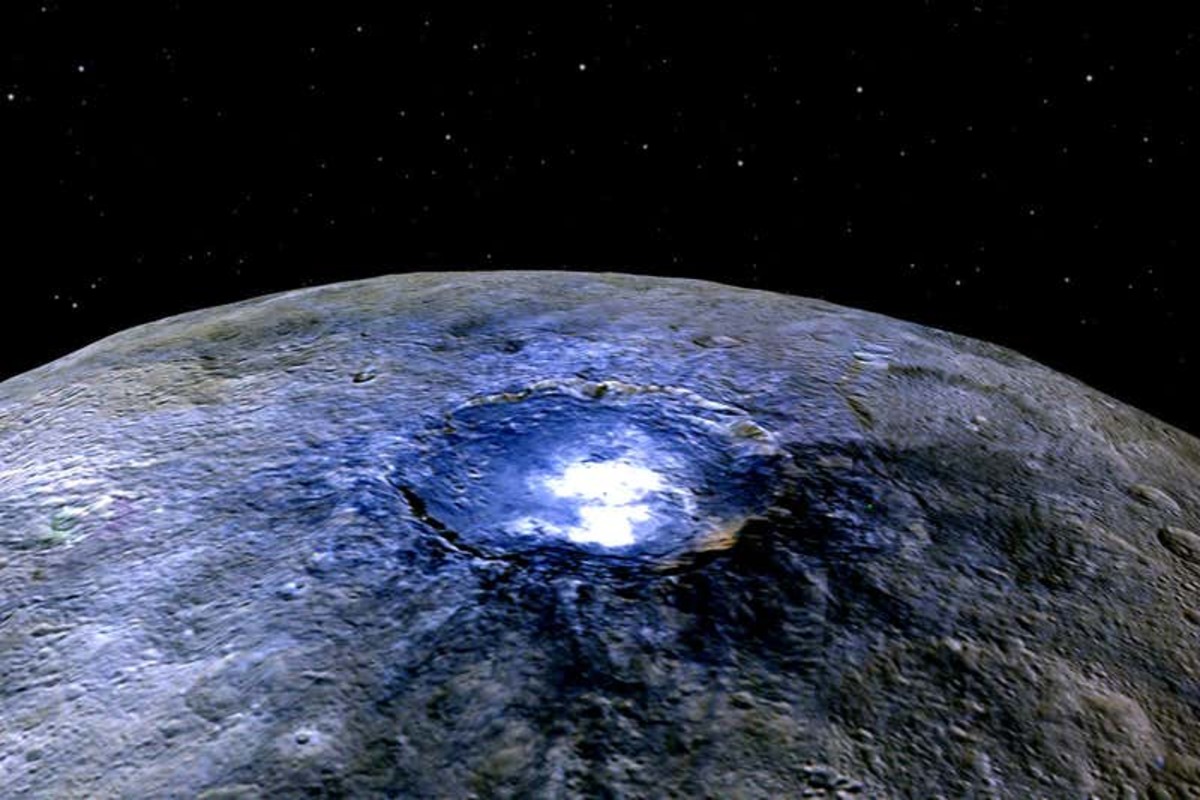 If you’re like me, you love the stars and learning about space and the amazing objects in our solar system, but sometimes you might think to yourself: why are all but one of these planets named after gods? We’ve got Mercury, Mars, Jupiter, Saturn, Uranus, Neptune and Pluto! Where the heck are all the goddesses besides Venus? Well, it turns out they’re in the asteroid belt and NASA scientists just solved a mystery about the largest one!

As you might recall, between Mars and the outer gas giants of the solar system is an area we know as the Asteroid belt, and many of those Asteroids are actually large enough to merit names. There’s Pallas, Juno, Vesta, Eros, and Psyche. But the largest by far, and the largest object in the asteroid belt is Ceres, named for the Roman Goddess of the Harvest. She’s large enough in fact to be classified as a planetoid, rather than an asteroid. And while she’s smaller than Pluto, Ceres is way more lively. As in … she might be able to support life!

Yes, tiny Ceres has been a mystery to astronomers and NASA scientists for a long time due to the especially the bright regions on her surface that seemed to glow. Mainly these regions are found in an area called the Occator crater. According to NASA’s Jet Propulsion Laboratory, scientists believed “that the bright areas were deposits made mostly of sodium carbonate – a compound of sodium, carbon, and oxygen. They likely came from liquid that percolated up to the surface and evaporated, leaving behind a highly reflective salt crust.”

No one was sure what kind of liquid, or how. But the kids at NASA got a better look at Ceres in 2018 when the Dawn spacecraft made the closest-ever approach to the planet, and it’s taken until now for scientists across the world to piece together all of the information and images from Dawn and what they’ve discovered is amazing. Beneath Ceres surface lurks a “deep reservoir of brine” that is, saltwater, that’s over 25 miles wide!

The data that led to this discovery was analyzed by the National Institute for Astrophysics in Italy led by Maria Cristina De Sanctis. “I’m extremely excited to find some evidence of liquid water, together with the fact that this body has a lot of minerals very interesting for the formation of life,” DeSanctis told the New Scientist. “It’s a good combination of chemical compounds that help in forming biological molecules.”

This is, to put it mildly, totally awesome.

Scientists were able to determine the presence of this briny deep not just using the image from the Dawn spacecraft, but using math and information from Dawn about Ceres’ gravity. I’ll let the JPL at NASA explain this one:

On a larger scale, scientists were able to map the density of Ceres’ crust structure as a function of depth – a first for an ice-rich planetary body. Using gravity measurements, they found Ceres’ crustal density increases significantly with depth, way beyond the simple effect of pressure. Researchers inferred that at the same time Ceres’ reservoir is freezing, salt and mud are incorporating into the lower part of the crust.

This isn’t the first time tiny Ceres has made waves in astronomy. She was discovered in 1810, but her existence, or the existence of something between Jupiter and Mars, was theorized way back in the 1770s. For decades, Ceres was considered a planet in her own right, until being downgraded to an asteroid, then back up to a Planetoid/Dwarf planet. She’s certainly more like a planet than any other object in the asteroid belt, given that she’s round thanks to her gravity and rotation.

And now we know for sure that there’s literally more beneath her surface than we thought!