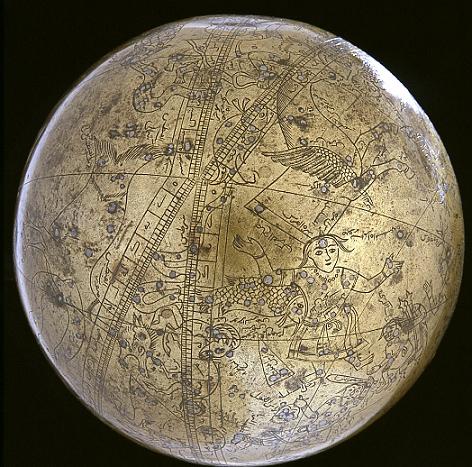 If you’re still reeling from the news that the Antikythera mechanism actually does have a relatively mundane purpose, there are plenty of other inexplicable historical objects for you to latch on to.  The celestial globes of medieval Islam, however, should no longer be on your list.

These hollow spheres of brass were used as maps of the positions of the stars and planets, and so used to solve ancient astronomy problems.  Many of the more than one hundred spheres in museums today were cast in two pieces, and then fitted together, leaving a seam.  The rest seem to have been cast in one piece, seamlessly.  Emilie Savage-Smith tackled the question of how ancients could have crafted seamless spheres, and found an answer.

Savage-Smith’s discovery began with a assignment from the Smithsonian, to discover the historical creator of its unsigned and undated celestial globe.  In order to do so, she embarked an a journey across Europe and the Middle East, cataloging the characteristics of globes as she went.  This intensive study, described in this article at MuslimHeritage.com, allowed her the insight to discover how the seamless globes were made.

In her weighty monograph in which she details the outcome of her decade long quest, Savage-Smith reveals that the process of seamlessly casting hollow metal spheres became well established in North Western India by the end of the 16th century. Though a Lahore workshop was the most prolific, she discovered other workshops were also making precision seamlessly cast globes.

And as for the Smithsonian’s sphere?

Savage-Smith discovered that [it] belonged to a remarkable family of globes that were seamlessly cast and made by one workshop in the city of Lahore, in present day Pakistan… But why did the maker leave such a fine instrument undated and unsigned? On closer examination Savage-Smith identified a factual error in the surface engraving and surmises that this caused him to cease work on this almost finished globe, leaving the unfinished instrument undated and unsigned.

The rest of this comprehensive review of Emilie Savage-Smith’s work, including discoveries concerning the surprisingly advanced state of some ancient medicine, can be found here.