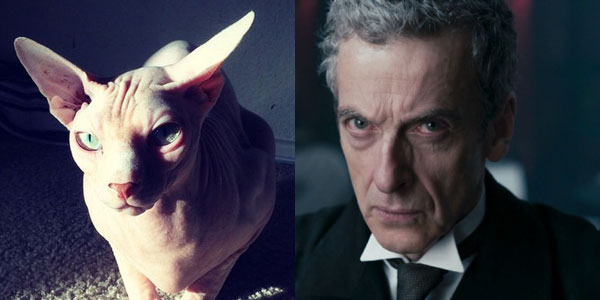 This piece was originally posted on Catster under the title Doctor Who? Cats Who Look Like Peter Capaldi, and has been partially republished here with permission.

Writing about kittens and puppies on the Internet doesn’t leave me much time to compose essays related to my principal preoccupation, to wit, Doctor Who. Fortunately, one of my editors at Catster is a huge Doctor Who fan herself, and I was ecstatic when my pitch for a photo essay comparing the distinctive looks of hairless cats and Peter Capaldi’s Doctor was approved. How would I approach it, though?

Since Catster’s audience consists of cat lovers, aficionados, and fanciers, and not necessarily people interested in science-fantasy, I had to strike an appropriate balance. I needed both hairless cats and Doctor Who to be accessible to all readers, while satisfying obsessives who might be well versed in either topic. So without further adieu:

Change is at the heart of Doctor Who. The lead actor changes on a regular basis, as do his traveling companions. In August 2014, Peter Capaldi’s tenure as the Doctor officially got under way.

What does any of this have to do with cats? Well, I wrote a piece recently about the singular challenges of owning hairless cats. As I finished writing, an uncanny resemblance struck me with the force of revelation. 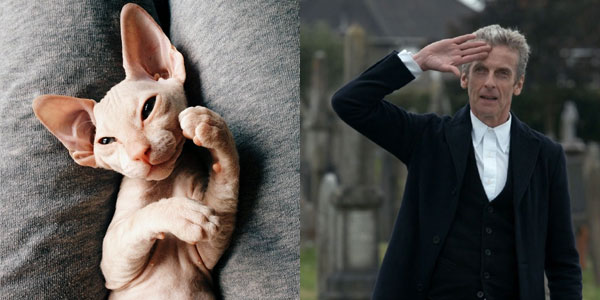 Salutes all around. Still image from “Death in Heaven,” cat photo by dashadaysse on Instagram.

I was simultaneously reminded of and inspired by Red Scharlach’s infamous Tumblr gem, “Otters Who Look Like Benedict Cumberbatch.” Since Peter Capaldi’s first episode, he’s absolutely owned the role of the Doctor. He is a great actor, and his dynamic facial features play their part. It was quite a task to represent the range and scope of Peter Capaldi’s remarkable face using only hairless cats, but I had to try.

Although the character of the Doctor is continuous, thirteen actors have now played the lead role since 1963. From Colin Baker, whose Sixth Doctor wore a series of cat lapel pins, to Paul McGann’s Eighth Doctor, who became a cat for a short time in the comics, each delivers a unique interpretation. Peter Capaldi’s Doctor comes across as gruff and aloof at times, and is clearly impatient with anything that isn’t strictly relevant to the crisis at hand. 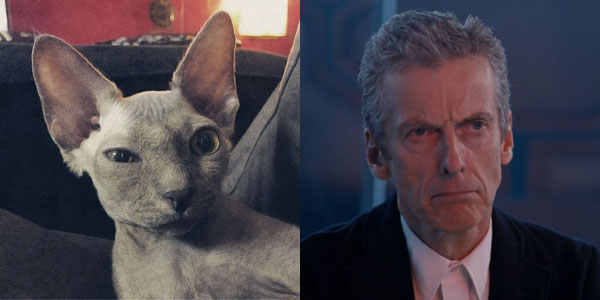 I don’t blame you for raising an eyebrow. Still image from “Dark Water,” cat photo by frabor_98 on Instagram.

It’s a gross oversimplification, but during the David Tennant and Matt Smith eras of Doctor Who (2005-2013), the Doctor tended to be a genial, welcoming, and tolerant character. With Peter Capaldi, Doctor Who reminds us on a weekly basis that while the Doctor may look human, he is an alien who has “walked this universe for centuries untold” and seen “stars fall to dust.” 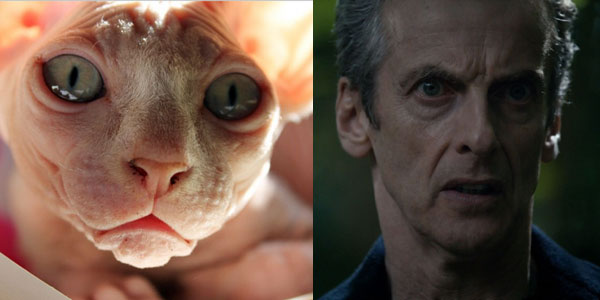 The cat and the Doctor are equally befuddled. Still image from “In the Forest of the Night,” cat photo by ritzyburg on Instagram.

Fans of hairless cats are just as opinionated about the Sphynx cat as fans of the show are about Sylvester McCoy’s Seventh Doctor. They are as knowledgeable about the Peterbald cat as Doctor Who fans are about Peter Davison’s Fifth incarnation. Pedantic Who fans will protest that Peter Capaldi is not bald; they’re not alone, since, technically, neither are hairless cats.

Regardless which actor inhabits the role, the Doctor is at his best when he shares his adventures, usually with a human companion. The Doctor has a tendency to go off the rails when he is alone for too long. Any hairless cat owner will have a similar story. Hairless cats are extremely social creatures, bordering on clingy, who only truly thrive when they have constant companionship. Many hairless cat devotees solve this with a second hairless cat. 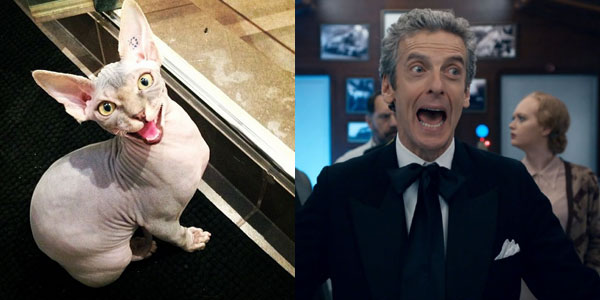 Everyone loves kitten pictures. Still image from “Mummy on the Orient Express,” cat photo by pernellthesphynx on Instagram.

Companionship takes a number of forms, as Peter Capaldi’s companion, Clara, would easily attest. Where the previous Doctor, Matt Smith, was a big fan of affectionate interaction, Peter Capaldi is decidedly not. “I don’t think that I’m a hugging person now,” he says, uncomfortable at Clara’s friendly embrace in the season premiere. Hairless cats, on the other hand, can’t get enough of physical contact.

When companions travel with the Doctor, their lives and perspectives change substantially, if not irrevocably. It is much the same with hairless cat owners. People who like low-maintenance relationships do well to steer clear of both. Any relationship worth having is worth working on and committing to. That goes double for hairless cats and Peter Capaldi’s brand of the Doctor. 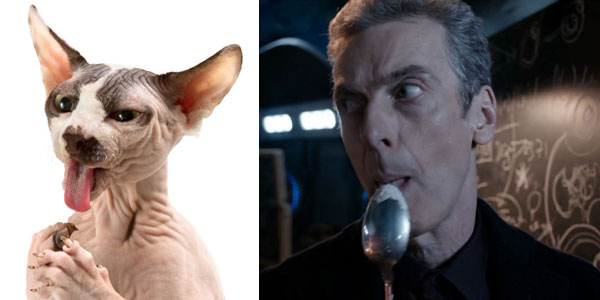 Living with a hairless cat and traveling with the Doctor each present unique challenges to humans. Still image from “Robot of Sherwood,” cat photo, Young cat sphynx isolated on a white background, by Shutterstock.

One of my favorite Doctor Who podcasts, Verity!, recently described traveling with the Doctor as similar to “wrangling twelve children.” To be sure, Peter Capaldi’s Doctor can be mercurial and reckless. That’s not a problem with hairless cats, but their limited fur means they need weekly grooming attention from their human friends, and their high metabolism means they are always looking for high-quality food.

In “Kill the Moon,” Peter Capaldi’s Doctor is distressed to find that a schoolgirl has been posting pictures of him on Tumblr. His desire for anonymity is not surprising. It was a missed opportunity, though. The Doctor should have advised her to stick to the true purpose of social media: sharing cat pictures. Pictures of cats make everyone happy. 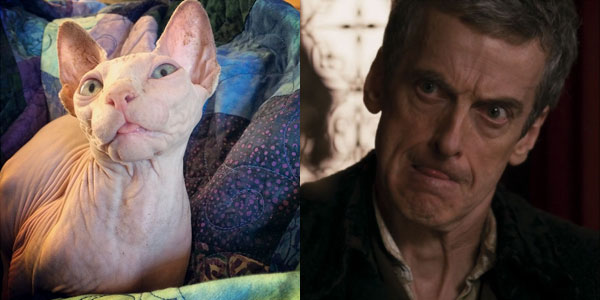 Turns out hairless cats are just as expressive as Peter Capaldi in Doctor Who. Still image from “Deep Breath,” cat photo by erintorola on Instagram.

“It’s the end” of our look at Doctor Who and hairless cats, “but the moment has been prepared for.” Which fandom do you represent: hairless cats? Doctor Who? Do you occupy the intersection of the Venn diagram? Catster’s covered both before! We want to hear from all of you! Which Doctor is your favorite? What breed of hairless cat do you like best? Let us know in the comments!

The original post, “Cats Who Look Like Peter Capaldi,” ran right before “Flatline” aired, so, I went back through the last three episodes of Capaldi’s relentlessly brilliant first series to put together three new hairless cat/Twelfth Doctor pairings to entertain and amuse! Thanks so much to The Mary Sue for bringing the fun and cute cat photos to an entirely new readership!

To see the rest of the cats that look like Peter Capaldi, head over to Catster!

Melvin Peña trained as a teacher and scholar of eighteenth-century British literature before ditching the ivory tower to become a freelance writer and editor. He lives, works, and sings in North Carolina.