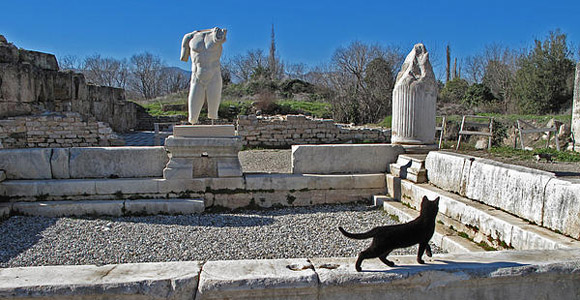 Having traveled to Italy this past year, I can attest to seeing quite a few cats laying about on all sorts of ancient items but this one takes the cake. While his owner was attempting to chase him down, a curious kitty discovered a set of ruins untouched for almost 2,000 years. All my cats do is sleep and lick themselves.

The ruins were found by the unnamed feline in a residential near the Roman city of Via di Pietralata. Its owner, Mirko Curti, and a friend were trying to track the cat just outside his apartment at a nearby rock cliff.

“The cat managed to get into a grotto and we followed the sound of its miaowing,” Curti told The Guardian. And what did they find inside (besides the cat)? What appeared to be funeral urn niches carves into the rock and tons of human bones.

“Archaeologists called to the scene said the tomb probably dated from between the 1st century BC and the 2nd century AD. Given that niches were used to store ashes in urns, the bones had probably tumbled into the tomb from a separate burial space higher up inside the cliff,” writes The Guardian. “Heavy rains at the start of the week had probably caused rocks concealing the entrance to the tomb to crumble, they added.”

While some Romans are irked to find out yet another ancient ruin has been uncovered which they’ll have to then tip-toe around, Curti called the whole thing “the most incredible experience” of his life.

I hope the cat gets special credit on a plaque.