Cassini’s One-Way Descent Into Saturn to Be Broadcast Live

What do you think will be the last thing it sees? 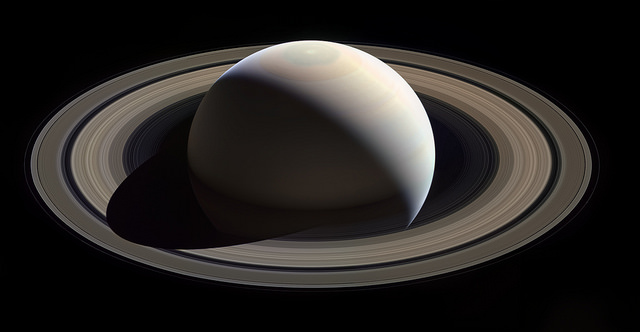 On September 15th, NASA’s Cassini spacecraft will make its final descent into Saturn’s murky depths, signaling an end to its storied probe life. For us Earth-bound humans, NASA wants to take you to Cassini’s final moments via live broadcast, which will show the little probe’s “grand finale,” so to speak.

The Hollywood Reporter, who initially ran the exclusive announcement, explains that NASA can’t continue to steer the craft around, as its fuel reserves are beginning to deplete. Once they’re gone, they can’t control it at all, and that represents a danger to further study of Saturn’s moons, as a crash-landing on any of those surfaces could threaten their ability to sustain life. It’s a very practical consideration, to say the least, and it really does make the most sense.

Of course, that can’t stop me from wondering: what will Cassini see as it descends into Saturn’s gassy exterior? Obviously, we’re likely to lose signal and miss out on what it actually sees, but I’m sitting here imagining some kind of feed from Cassini showing some strange alien civilization that had been hiding out in the center of Saturn’s core, and right before the feed goes dead, we catch a glimpse of what we might consider a city skyline.

I mean, imagine the reaction! Everyone at NASA just goes dead silent, mouths agape at what they may have just observed. They look to each other in awe, unsure of what to do next. In New York, one man plays chess with his father in a public playground, discussing his inability to get over his ex-wife. In the heart of Silicon Valley, members of The SETI Institute all start screaming at each other, throwing stacks of paper into the air and running in circles. Somewhere in Southern California, not far from El Toro Air Force Base, someone who looks like Will Smith will wake up next to someone who looks like Vivica A. Fox, go out to get the paper, trip over her kid’s trike, then look up at the sky to see it burning.

Wait, I just described the start of Independence Day, didn’t I?

Yeah, that was the start of Independence Day. Here’s hoping that ID doesn’t happen, because our so-called president is the furthest possible thing from Bill Pullman. I’m just saying, I wouldn’t trust that sock puppet to drive a semi, let alone a multi-million dollar fighter jet. I mean, come on.

Anyway. NASA’s Cassini “grand finale” will be broadcast live at 7:50 AM (time zone not listed, how odd) on the Science Channel. A few days after, they’ll run a breakdown and debrief in a special show titled Space’s Deepest Secrets: Cassini.