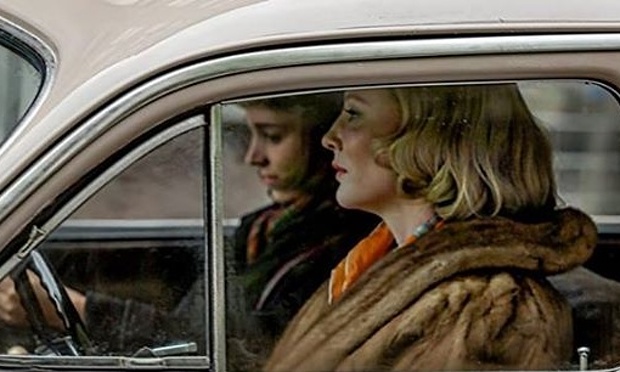 Walking into Carol, I think I was expecting something a little closer to director Todd Haynes’ previous 1950s set melodrama, Far from Heaven. That’s a movie I love and pretty much consider Julianne Moore’s greatest performance. Carol had a lot of live up to, but the odd thing is, Carol is remarkably different from its spiritual predecessor. If Far From Heaven is in the style of technicolor “women’s pictures” like Douglas Sirk, Carol actually has the subtle feeling of some of the international films coming out and making an impression in the late ’50s and early ’60s like Goodbye Again (underrated), Breathless, or Jules and Jim—Slow, deliberately paced, with none of the performative melodrama. Looking at Carol, there is almost an element of Hal Hartley’s romantic approach mixed into Haynes’ latest, and as unexpected as that is, I’m pretty much fine with that.

His new film focuses on a housewife, Carol (Cate Blanchett), divorcing her husband because she has decided she prefers the company of women (including best friend and former lover played by the great Sarah Paulson) and Therese (Rooney Mara), a slightly bohemian shop girl working in a toy department and engaged to Jake Lacy’s Richard. Carol and Therese have instant chemistry and attraction, although Therese has never considered this other side of life. She clearly has a certain apathy towards the promise of marriage and home life, but Carol seems to be opening her eyes to possibilities of another path. While Richard doesn’t pose a real threat to their relationship, Kyle Chandler’s Harge (Carol’s ex) does.

I know some critics have said Chandler’s character isn’t a villain, but watching even a second time, I can’t help but feel that’s the one note in this movie that falls closer to Haynes’ previous melodrama. Harge’s pretty hateful, and any love he has for Carol seems more like obsession. Whether this is behavior resulting from a frustrating, reserved time in our culture, I don’t know, but he often feels dangerous on-screen. Blanchett and Mara are just about perfect and have a chemistry that seems to perfectly play off each other; Blanchett’s brassy confidence and Mara’s reserved shyness bring things out in each to make their scenes together seem richer and richer. While the movie is sometimes frustratingly subtle and slow, the deliberate quality creates a rhythm that actually enhances the love story. Passion-wise, this is as close to the classic Brief Encounter as any movie in the past 50 years.

The script by Phyllis Nagy is beautiful, with almost lyrical dialogue, seemingly written for each actress’s vocal strengths. As usual in Haynes, the production detail is more specific than most movies, making everything seem both specific and beautiful at once. The simple use of color for Blanchett and Mara’s clothing says plenty about the characters, especially in the silences the movie wanders into for extended periods. If there’s one complaint, and it’s just a personal preference, it’s the use of filters. I know it’s used to make all this feel voyeuristic, like looking through a window, but it is still a frustrating way to watch a 2 hour movie. Again, it’s my preference, not a narrative or cinematic error.

What Haynes gets so perfectly right with this film really is the very specific sense of time and place, the urban life of those torn between domestic life and beat culture, before public and vocal feminist and LGBT activism. It’s questionable whether Carol and Therese would even be activists in years to follow, considering their temperaments. But the movie isn’t about that. Much like A Single Man (which might be the best double bill for this movie) this is very much a movie about the personal, private lives of these lovers whose affection is no different from straight couples. Even if they were kept secret at this time, we know they existed all the same.