Capitol Rioter Has an, uh, Interesting Explanation for Note He Left in Nancy Pelosi’s Office 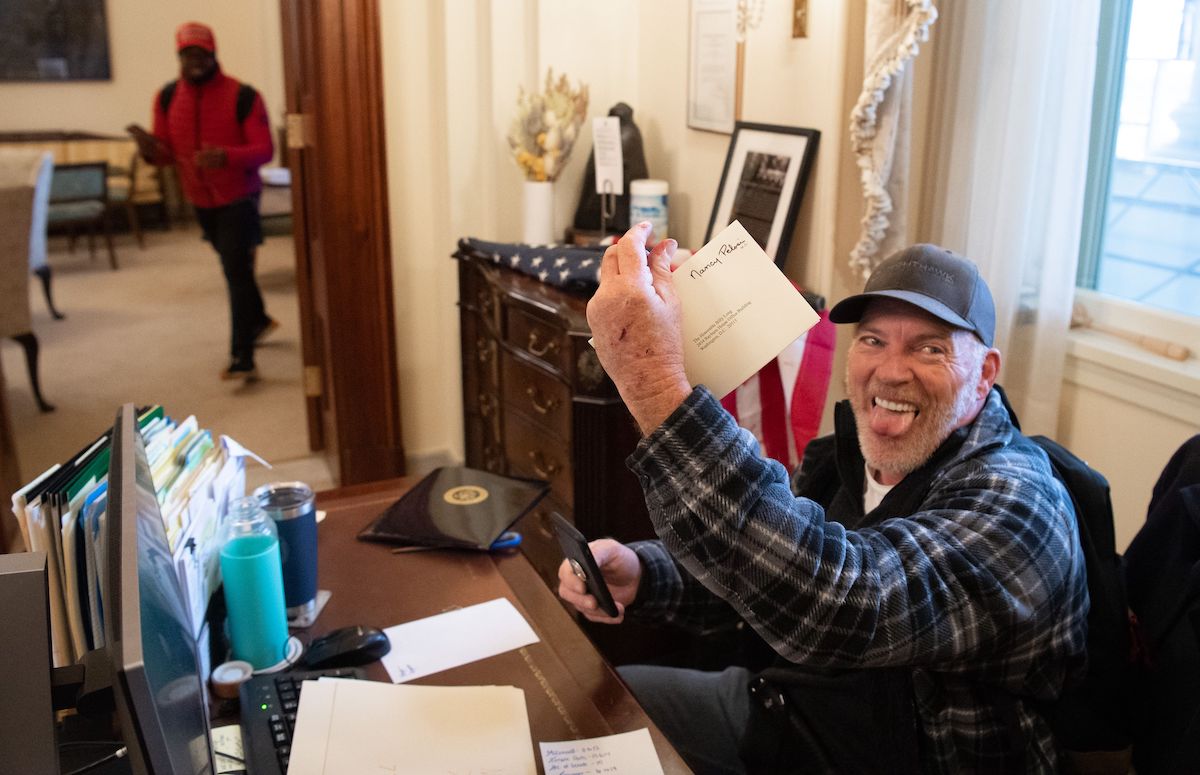 Richard “Bigo” Barnett was arrested just days after the January 6th Capitol insurrection. There’s no question that he was there—he’s the man who sat in Nancy Pelosi’s office and put his feet up on her desk, as we all saw in one of the most widely circulated photos of the riot.

In addition to the viral photograph, Barnett also bragged to reporters outside the Capitol that he left a note for Pelosi, which he says read, “Nancy, Bigo was here you bitch.”

Except his lawyers are now arguing that Barnett didn’t write “bitch.” They say he wrote “biatd.” You know, that common phrase we all know and say.

They also argue that the government is intentionally trying to cast Barnett “in the worst possible light” by adding the (more aggressive) “you” and omitting the (super casual!) “Hey” in the note. No matter, I guess, that those documents were quoting Barnett’s own words as he relayed them to reporters.

(In that same interview, he said he didn’t “steal” an envelope from Pelosi’s desk, proving his innocence by … holding that envelope up for the cameras.)

In a footnote in court filings, the lawyers add, “On information and belief, the ‘d’ was meant to be two letters, ‘c’ and ‘h’ with the ‘c’ connected to an ‘h’ to spell the word ‘biatch’ which is a slang and less offensive word for ‘b*tch’.”

They include a link to idioms.thefreedictionary.com that states “biatch” is “slang … used as a term of endearment or disparagement for another person.”

So it could have been a term of endearment! Barnett—a self-described “white nationalist”—breached the Capitol, apparently armed with a 950,000-volt stun gun, found his way to Pelosi’s office, made himself at home, and allegedly took a piece of mail from her desk, all because he just likes her so much. Makes sense! He was just hoping to hang out with his best biatd on that special day.

Last month, Barnett threw a full-on tantrum during a virtual court hearing, shouting that it was “not fair” that he had to remain in jail while awaiting trial.

Complaining that other accused rioters had been released from custody already, Barnett yelled, “This has been a bunch of crap!”

Barnett was finally released from jail this week. He’ll be under house arrest in Arkansas as he awaits his trial. Best of luck to you, biatd! Hope you get everything you deserve.