Everybody Panic! Capitalism Is Killing You With Toxic Receipt Paper! Is Nothing Sacred!? 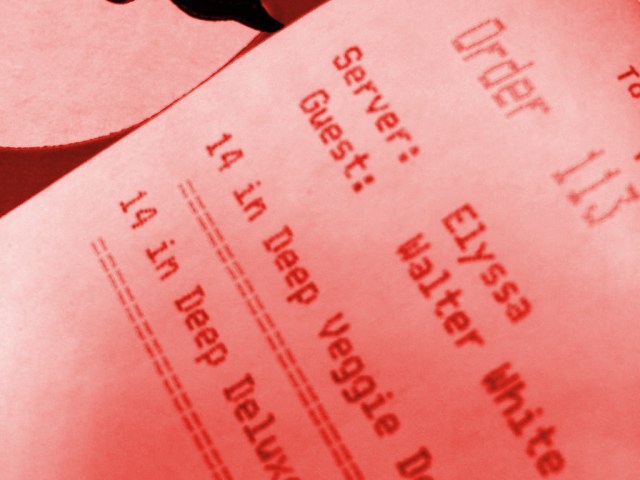 That’s it. Bolt your doors. Board up your windows. Huddle alone in the dark, and for Chrissakes, don’t touch anything. Everything is trying to kill you. Everything. Even the receipt paper from that donut you just bought. Even huddling alone in the dark, because you’ll probably starve if you don’t ruin the whole thing by going outside or moving or something! Life carries a significant risk of death.

But back to the donut and the receipt paper for a minute: Thermal printing paper like the kind used in many cash registers is covered in a print-developing chemical called BPA (Bisphenol A), which is a chemical that shows up significantly in the bodies of the human population. Donuts are delicious things you shove into your face-hole until your stomach hurts. (No? Just me?) When you put the two together, the results are… not great, according to a new study published on PLOS ONE.

The team from the University of Missouri found that the evil receipt paper is colluding with other products you thought were your friends like hand sanitizer and sunblock to increase your skin’s absorption of BPA by up to 100 times—enough to significantly raise its levels in your blood after handling thermal paper. Add that to the additional BPA which is then ingested orally when it transfers from your hands to your food, like our friend the donut or whatever it is you’re into, and let’s just say you’ve got another great reason to do all your shopping online.

The study notes that previously, it was assumed almost all BPA exposure came from the packaging of food and products, but thermal paper may play a larger role in light of the ease of absorption when combined with common skincare items. Luckily for you (unless all my readers are children, which I guess would make sense), BPA is widely regarded as only potentially dangerous to children and isn’t likely to pose harm to adults in concentrations typically found in humans. Just don’t go too crazy on any shopping sprees, and you should be fine.

Or if you’re really concerned, you could just stop buying things, or stop cleaning your hands and protecting them from skin cancer—two totally doable solutions. And remember: Everything is trying to kill you, so you should probably not worry about this one too much.

Previously in things that are trying to kill you