Can We Take a Minute to Appreciate the Kickass Women of the Cannes Jury?

But also realize that this doesn't "fix" the festival's issues with representation. 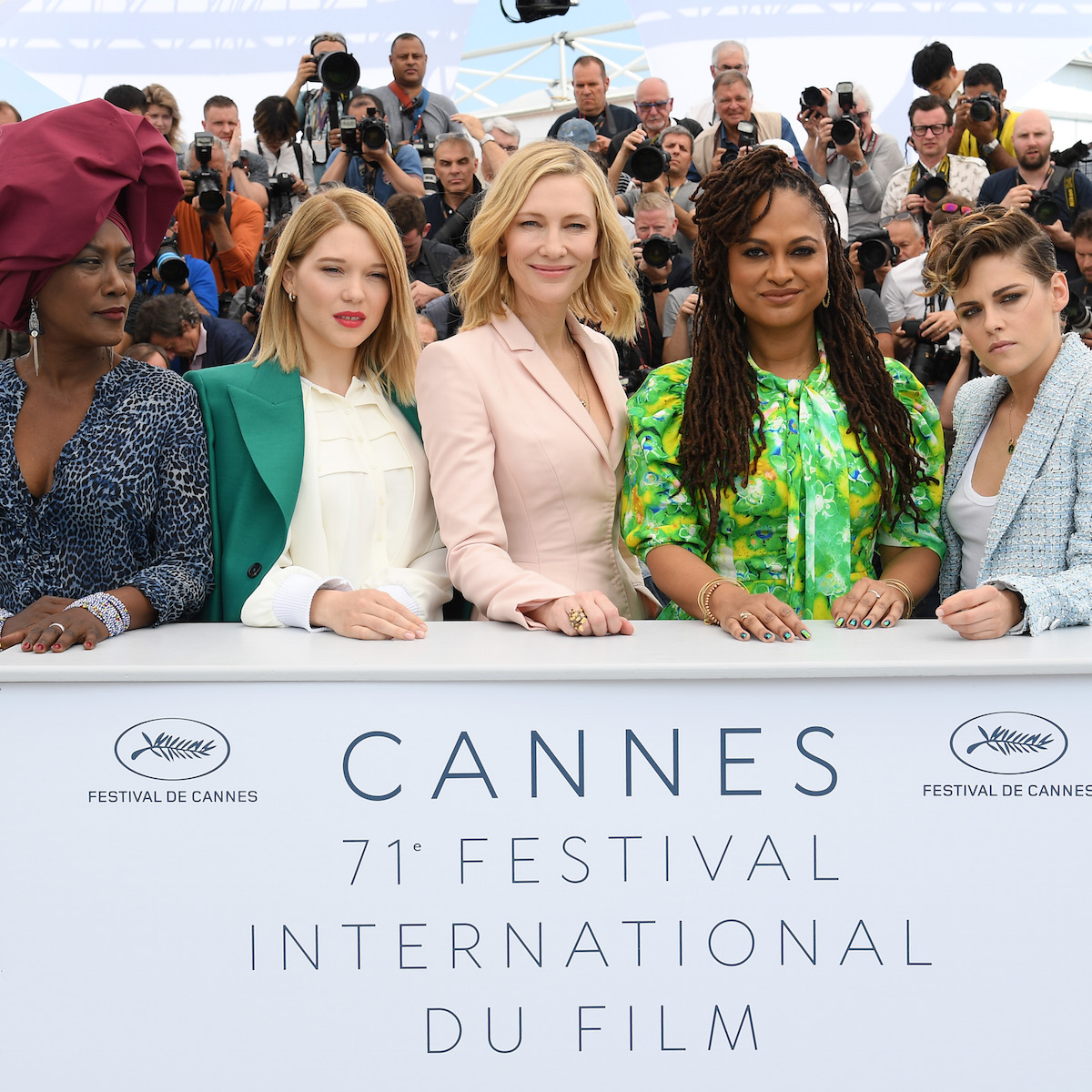 Today is the first day of the Cannes Film Festival, and while we’ll likely be hearing all about the actual films in the coming days, today, everyone is in love with the women of the festival’s jury. From left to right in that photo above, that’s Khadja Nin, Lea Seydoux, Cate Blanchett (the jury president), Ava DuVernay and Kristen Stewart.

And here’s the entire Cannes jury, men in the back pic.twitter.com/ecHVES1nQP

Their four male counterparts are about to become the least-photographed Cannes jurors of all time. https://t.co/q57JfwLP5G

But it’s the women that are at the forefront of festival coverage right now, and that’s not a huge surprise. To start, that’s just a badass group of women.

Flung out of space pic.twitter.com/LnLwujdDc1

And while women are generally well-represented in the Cannes jury (for the last few years, four of the nine spots have been filled by women), that does not mean that women have deserved the respect they deserve at the festival. Last year, jury member Jessica Chastain called the onscreen representation of female characters “disturbing,” noting a lack of female storytellers–something that could easily have gone unnoticed, since Sofia Coppola won the award for Best Director, making her only the second woman to do so.

“For the most part, I was surprised by the representation of female characters on screen in these films,” Chastain said at the time. “I do hope that when we include more female storytellers, we will have more of the women that I recognize in my day-to-day life. Ones that are proactive, that have their own agencies. They just don’t react to the men around them. They have their own point-of-view.”

Those comments are especially upsetting because it doesn’t seem like the festival is trying to change anything. Just last month, the festival’s head, Theirry Fremaux, made it clear he doesn’t think there’s anything to be done in regard to increasing representation. “My responsibility is cinema,” he said. “I don’t have the legitimacy to speak about the question of women. The Cannes selection is based on artistic values, not social ones.”

That’s disappointing, but not exactly surprising. The systematic relegation of female characters to the periphery of these stories may be a “social” issue. But it’s also lazy, discriminatory filmmaking, and something Fremaux should be ashamed to let continue. But I suppose it’s up to these judges to set more contemporary standards.

And it’s important to note that “contemporary” standards–keeping up with the basic trends of humanity–is not the same thing as being “political,” at least not in terms of all the negative connotations that word has picked up. The impact of the #MeToo and #TimesUp movements are impossible to ignore in regard to their impact on the film industry, even specifically on this festival, as a number of the allegations against Harvey Weinstein took place at Cannes, a prime location to leverage young women’s desire for success for access to their bodies. This year, the festival set up a hotline so guests could report harassment or assault.

But when it comes to the films themselves, the judges aren’t necessarily trying to make this the #MeToo Festival. In a press conference (via THR), Kristen Stewart said that the “topical nature of films” is important, but “it is more important that in 10 years time (the film) will still stand up.” Cate Blanchett said that current politics will “not specifically” play a role in the judging. “There are several women in competition. They are not there because of their gender. They are there because of the quality of their work. We will assess them as filmmakers, as we should be.”

Yet that “several” is really only three. Three female directors in competition. Blanchett says that “the selection committee now has more women on board than in previous years, which will obviously change the lens through which the films are chosen. But these things are not going to happen overnight.”

She continued, “Would I like to see more women in competition? Absolutely. Do I expect and hope that that’s going to happen in the future? I hope so. But we’re dealing with what we have this year, and our role in the next almost two weeks is to deal with what is in front of us.”

Hopefully, this year is a step towards a more equitable and inclusive festival (building on the bold step Jessica Chastain took last year in calling out the bullshit representation like she did). But I don’t think the judges need to lean away from addressing the lack of inclusion for fear of appearing too political. If there are only three female directors in competition, that is not a meritocratic environment. Better onscreen and behind-the-scenes representation will only make for better art, and while these things may not happen overnight, they’ll surely move faster if everyone involved addresses the existing failings head-on.