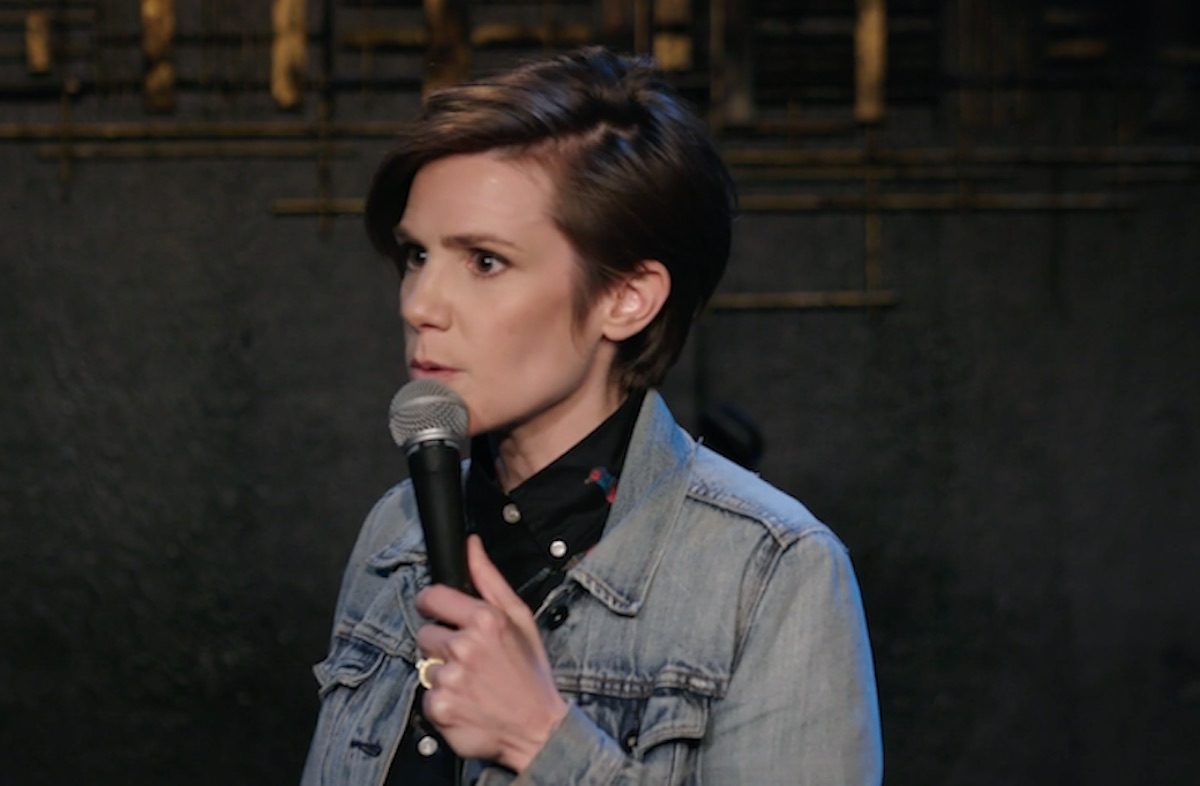 Comedians spend years touring new material, waiting for a network (ok, Netflix) to call and ask to produce their special. Cameron Esposito probably got that call, but instead, she’s decided to make her newest comedy special, Rape Jokes, free to stream on her site. There’s also a donation option, and all the profits go to RAINN, the non-profit, anti-sexual asault organization.

As someone who spends 98% of her time listening/watching comedy, I can say that modern comedy splits itself into two categories: escapist and realist. While there are some comedians who stay out of the conversation of our current climate, there are others who have had their bread buttered by diving right in. Rape Jokes falls into the latter category, but is pretty groundbreaking in its content.

At one point during the special, Esposito starts on the sexual assault portion of the hour and really gets to the driving force behind why she put it all together so quickly, only having started in January.

“On thing that seems true, is that it does seem that we are starting to talk about sexual assault and harassment as if they are part of our culture. They are. The only thing I worry coming from where we are right now, is that we will take down 8 powerful men, rub how hands together and then be like ‘Ha, we’ve solved it.'”

While #MeToo and #TimesUp are still fluttering through our Twitter feeds, the mentions are dwindling, which is something Esposito picked up on immediately. During an interview with Vulture, the comic explained that things kept happening. There was the infamous “pussy tape,” Trump snagging the Oval Office, the saddening number of sexual misconduct claims in Hollywood, but it was when she noticed that “comeback narratives” were starting to brew about these men that she rushed to put Rape Jokes together.

I think that Esposito is one of the funniest comics of our time, but Rape Jokes is an emotional rollercoaster. She takes you on a journey of politics, queerness, periods, and first kisses all within an hour. There were times I even felt bad for laughing, not because it wasn’t funny—it was hilarious—but there were moments that were just too real. A few of Esposito’s perfect bits were a cold hard look at what the perceived female role is in society. Obviously, every child born a woman is given a little plaque at birth that says, welcome aboard, your vagina (and only your vagina) is valued here, but boy is it hard to come face-to-face with. As a queer woman, Esposito has to come to terms with “opting out” of the only value she thought she had, as she put it:

“When you are raised female, when you’re a cultured female, the thing that you are valued for, the thing that you are taught  you are valued for is your fuckability. That’s it. So I was also realizing that the whole system, the systems set up to evaluate whether or not I have value, I was going to be opting out of for the rest of my life because of the person that I was. It doesn’t matter if you want to fuck me, I’m not available, The System.”

Esposito opens up and gives a raw look at not only what it’s like to be a woman, but to be a queer woman who doesn’t know what kind of attention to look for from men. Towards the end, she talks about drinking to make it bearable, and I totally cried. As women, we are told what not to do. Don’t talk too much, don’t be too loud, don’t be too emotional, dress in a way that isn’t “asking for it”—those are things that society (hopefully) is starting to tear away from, but they are still there. It makes me angry about once a day, but I never thought about the added burden for a queer woman during adolescence. But now I’ve learned a lot.

Honestly, stop whatever you are doing and go stream Rape Jokes. Also, it should be required viewing for all men. Through brilliant bits, it touches on the cornerstones of what it’s like to be raised as a woman, and what society does to you if you are.