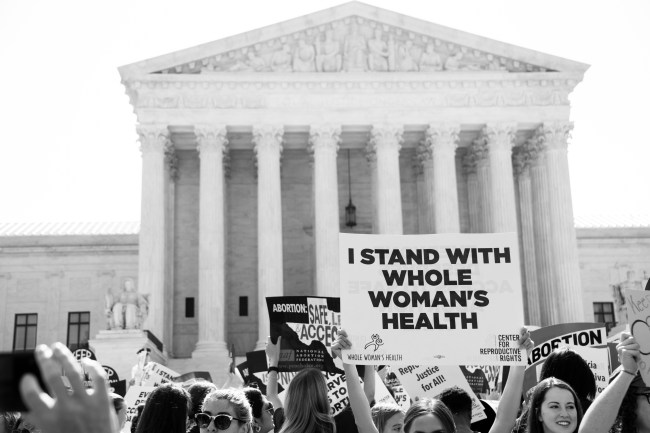 This week, we celebrated the 45th anniversary of Roe v. Wade, the U.S. Supreme Court decision that granted women the right to have an abortion, which has been under attack almost since the second the decision was announced. Yet despite that, pro-choice groups like Planned Parenthood and others have been pushing to allow women to have access to their legal rights.

According to NPR, a new bill that was introduced back in February by Democratic Sen. Connie Leyva in California “would require all heath centers within four-year public universities to stock mifepristone and misoprostol, the two drugs used to induce a medication abortion for pregnancies less than 10 weeks. Medication abortion is different from PlanB, known as the morning after pill, as the latter prevents conception.”

The reason for the bill was that the student government at the University of California, Berkeley passed a resolution back in 2016 asking their health centers to provide medication abortions. “Though members of student group Students United for Reproductive Justice were shut down by university leaders, Leyva took up the issue, along with the Women’s Foundation of California Women’s Policy Institute.”

Leyva told NPR that “when they were denied, they brought the issue to us, and I thought that this was something that young women should have access to, because it is their constitutional right.”

To mitigate the $14 million price point for the program, which includes training, equipment, and other preparations, a private group including the Women’s Foundation of California and the Tara Health Foundation have agreed to pay for the program.

The bill has been approved by the state Senate committees and is expected to be voted on in the Senate by the end of the month, even with pushback from some conservative groups. It’s a victory for these young women to have autonomy over their reproductive freedom and health.

When I think about abortion and the legacy of Roe v. Wade for women growing up today, I’m reminded of a great line from Katha Pollitt’s book, Pro: Reclaiming Abortion Rights. In the book, Pollitt talks about the importance of reclaiming abortion as not an issue of science or faith, but as an issue for women and their ability to choose the futures they want.

“Because when we talk about abortion as a bad thing, and worry that there’s too much of it […] a lot of time we mean a woman should have a good cry, and then do the right thing, and have the baby,” she says. “And that is close to saying that a woman can have no desires, purposes, or calling so compelling and so important that she should not set it aside in an instant, because of stray sperm.”

As Pollitt says some 55 million women have had abortions since 1973. Around 3 in 10 American women will have terminated at least one pregnancy. 6 in 10 women who have abortions are already mothers and 7 in 10 are poor or low-income.

We talk about the life or existence of a child or fetus while often neglecting to acknowledge the hard reality of what potential motherhood looks like. The United States already ranks lowest in the developed world when it comes to maternal death, and that rate is rising. It may be an uncomfortable reality, but giving birth in the U.S. is more dangerous than getting a legal abortion. Even Serena Williams, a woman with the money to afford the best healthcare for herself and her baby, had to instruct medical staff on how to give her the proper treatment after she started experiencing shortness of breath due to blood clots.

For those who “feel morally opposed to facilitating abortions,” I hope that, instead of trying to stop women from accessing their legal rights, they would try to make the system more helpful and safer for women who do choose to have children. They should also feel morally opposed to between 700 and 1,200 American women every year dying from childbirth.

And now the students in University of California and California State University schools will be able to have a little bit more control over their futures.