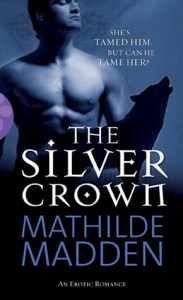 “There are also a great number of graphic sexual encounters, one per chapter through most of the book, including detailed descriptions of [REDACTED BECAUSE CHILDREN READ THIS SITE]. Crude slang is used to describe various body parts and the sex act itself. The sex is sometimes rough but always consensual. Women are portrayed as frequently aggressive, always willing, and seemingly insatiable. Men are portrayed as frequently demanding, always ready, and seemingly inexhaustible. The sex occurs between humans and werewolves, as well as intra-species. On the other hand, the sex appears to be between consenting adults. No minors are involved. No bestiality is portrayed (unless werewolves count). And there is no sadomasochism.”

Some background: In 2011 Pelican Bay State Prison inmate Andres Martinez ordered a copy of Mathilde Madden‘s The Silver Crown, a paranormal romance about a werewolf hunter who falls in love with a werewolf (you can see where this is going). The book was confiscated on grounds of obscenity, and Martinez has been fighting the decision ever since.

Now, more than two years later, the San Francisco Court of Appeal has come to a decision on the whole werewolf-erotica-in-prison issue, deciding that The Silver Crown is OK because it has literary value (sort of: “we too note that Madden’s book employs techniques recognized as literary devices”) and is unlikely to incite violence. Above is an excerpt from their official decision, all 30 scintillating pages of which can be read here.

Congrats to the California legal system on opting against censorship, though I have to judge them a little for not offering a definitive opinion on whether human-werewolf sex counts as bestiality. Granted, it’s a complicated issue: Are we talking full-on wolf form, or a Teen Wolf-esque human/wolf hybrid? And even when it’s not, ahem, that time of the month, a werewolf is still a werewolf, so would there need to be different terms for full moon and non-full moon sex? Like bestiality and super-bestiality? Inquiring minds want to know.