Gab, Twitter for Nazis, Is Having a 'Free Speech' Meltdown | The Mary Sue 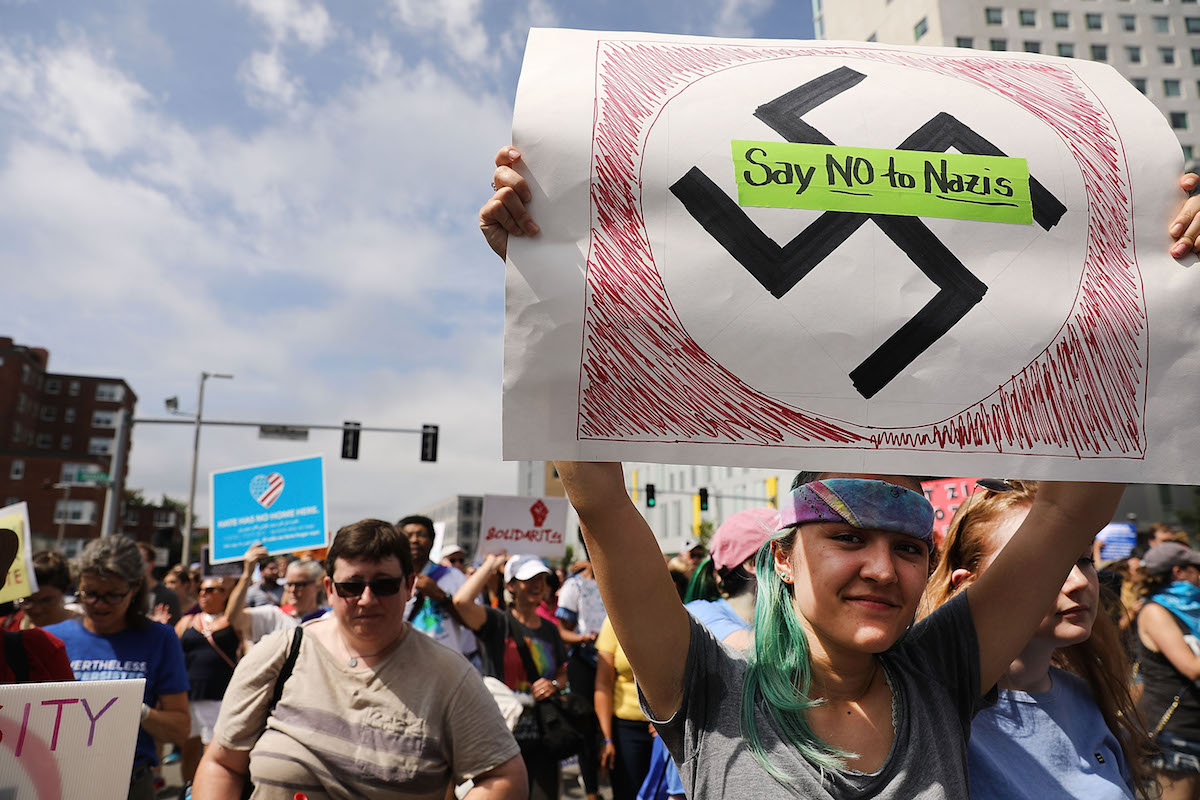 Anyway, I’ll miss not knowing what it is, but if you have to learn about the existence of a neo-Nazi social media site, there’s no better time to do so than when they’re having a public meltdown over “free speech” as advertisers as platform hosts collectively pull their support.

Gab is drawing attention because Robert Bowers, the man who opened fire in a Pittsburgh synagogue this weekend, killing 11 people, was reportedly an active member. Now, GoDaddy is apparently threatening to suspend their domain, and they say they’ve been removed from “App Stores, multiple hosting providers, and several payment processors.” They’ve resorted to talking to Alex Jones, the only career bigot who might have less of a platform than they do right now.

Will be on Infowars in 20 minutes or so.

So tune in, journalists, and listen to two of the most censored men in the history of the internet.https://t.co/bpD2fZXoEy

They say the site will be inaccessible for “a period of time,” but in the meantime, they’re having a full-on meltdown on Twitter. It’s more than a little dramatic.

There are like 3-4 total companies who decide if you exist on the internet or not. In the future that will mean they decide if you ever existed at all.

Freedom and The People will win every single time. pic.twitter.com/FsgwqTIOr1

Gab is making history and we will proudly be a martyr for free speech and individual liberty. The horrible actions of one man will not take us down. We will emerge stronger then ever before. The People and freedom will not lose against tyranny.

RISE. FIGHT FOR FREEDOM. NEVER GIVE UP.

GET TO THE POLLS AND VOTE OR RISK LOSING THE BILL OF RIGHTS IN THE UNITED STATES TO LITERAL COMMUNISTS.

THIS IS NOT A DRILL.

Yup, once again, a group of actual Nazis (or at least people who want to give a platform to Nazis, and if you think there’s a difference, I’ll just say we disagree) who don’t understand that the First Amendment in no way guarantees their right to be hosted by various internet servers. The claims that they’re being censored are especially inane, seeing as they’re posting these words on Twitter.

Part of me didn’t want to give Gab any attention at all, especially because they’re posting numerous tweets about what they seem to see as a brilliant plan to force journalists to give them coverage.

I did this interview for one reason: because idiots in the media listen to this crap and I knew they would contact us for further comment after hearing it. https://t.co/7oTt8tWK8U

However, even when their plan worked, they threw a fit about it.

The anatomy of a mainstream media smear campaign and character assassination.

The Washington Post is harassing my family, friends, and people from my past. I refuse to let them frame me and Gab as something we are not. pic.twitter.com/KD8n6A19AX

(If you don’t want to click through, that “harassment” is a couple of excessively polite emails asking for help to flesh out a story.)

So sure, on the one hand, Gab is being thirsty AF on Twitter, begging for attention, and maybe we don’t want to give it to them.

this tweet is a great opportunity to talk about reporters not giving subjects what they want. Gab CEO is speaking directly to journalists asking them to watch him and Alex Jones. They need ppl to pay attention. As reporters, we don’t have to. Remember it’s a choice you’re making. pic.twitter.com/GEko8hWrBN

reminds me of this tweet from last week from project veritas’ founder. quite literally saying the quiet part out loud. he’s looking for that free distribution. again: newsrooms can choose to do that but it is worth remembering its a choice. pic.twitter.com/O1B5HPdFs9

On the other hand, it is always satisfying to watch racists and antisemites whine about being censored just because other companies decide not to support their particular brand of evil.

No, man. Madness is thinking every business needs to host and support the violent Nazi content that you do and then thinking that the President needs to step in when they don’t. pic.twitter.com/dHR7DkOAAY

More importantly, though, I don’t buy into the “talking about a thing gives it power” argument. Or, more accurately, I believe ignoring a thing does not make it go away. Gab has existed for more than two years, but it wasn’t until they made headlines this weekend that GoDaddy seemed to notice the “numerous instances of content on your site that both promotes and encourages violence against people.”

It took prolonged public shaming for Twitter and Facebook to take the first hints of a step towards removing people like Alex Jones and de-verifying other hate speech accounts. And they deserve to be shamed for still hosting Gab. So while I totally respect those who choose to ignore the bigots, I’m all for the pile-on.