Google Doodles Are Now a Thing You Can Buy 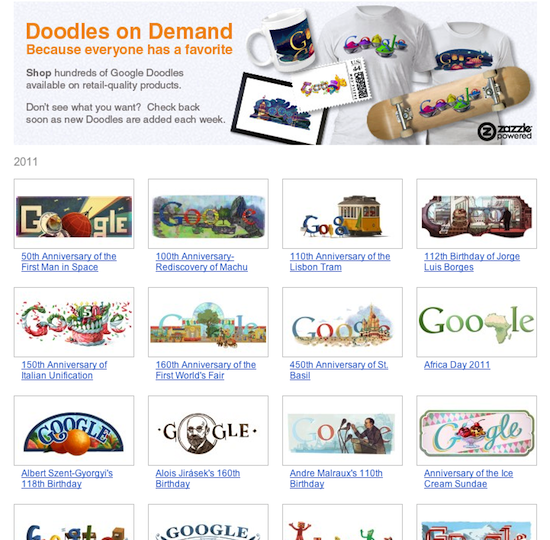 The ephemeral redesigns of Google’s iconic logo have been amusing the Internet since their introduction in 1998. Though these so-called Google Doodles only last a day, they’ve become increasingly complex over the last few years, with the addition of animated and interactive elements. Now, those spectacular doodles will be preserved on Google’s redesigned doodle archive, and you can even buy the doodles from Google’s new Zazzle store.

While it might seem silly to have a gallery of images that were meant to be seen only for a day, the gallery includes all of the doodles from all of Google’s localized websites. For instance, American audiences missed out on this incredible doodle — which is actually a playable game — that celebrated the 60th anniversary of sci-fi author Stanislaw Lem’s first publication. It also gives visitors a far more in-depth look at the creation of the doodles, like this one for the 112th birthday of Jorge Luis Borges.

Apparently the demand for more tangible versions of the doodles was so great that Google has partnered with print-on-demand service Zazzle to bring their doodles to life. Well, I say “to life;” what I actually mean is to t-shirts, stamps, posters, coffee mugs, and skateboard decks. Because everyone should see how much you love both Google and Alois Jirásek when you’re doing a sweet kick-flip.