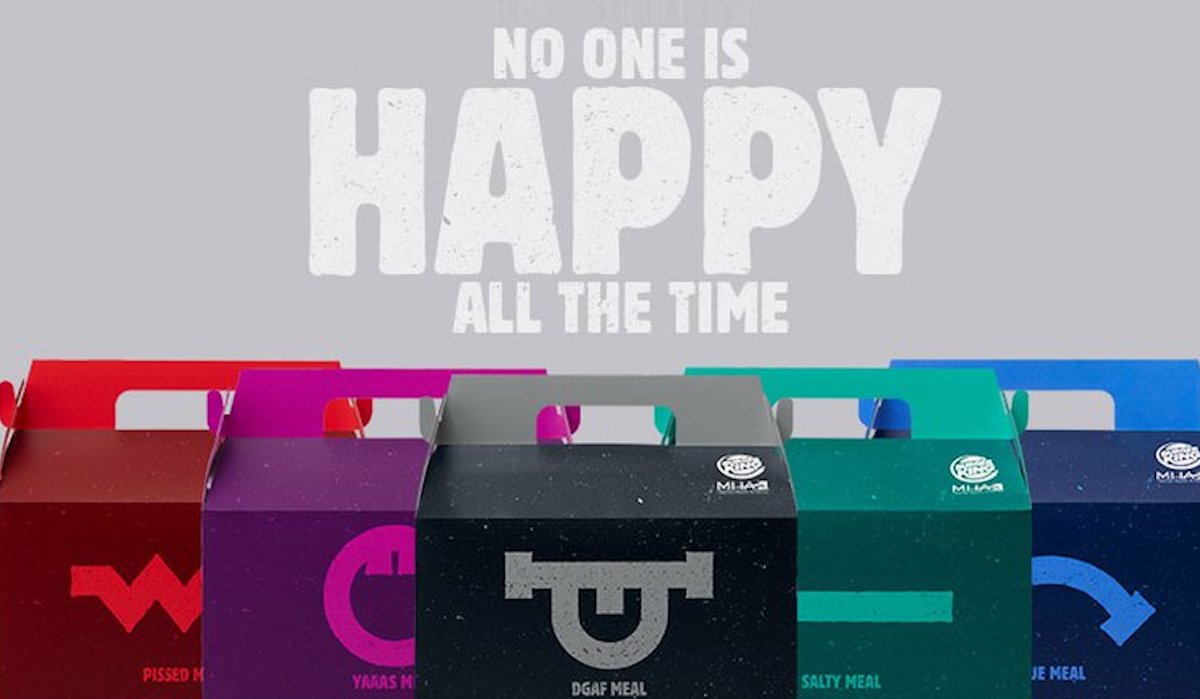 A new ad aired this week, co-sponsored by the nonprofit organization Mental Health America for the start of Mental Health Awareness Month. The video opens on a man sitting on a tiny bed in a somewhat dingy room. “Not everybody wakes up happy,” he says, launching into a spoken word poem that’s taken up by other characters–a teenage girl with “SKANK” carved into her locker, a young mom tired of feeling judged, a woman sick of her “creep” boss, a man overwhelmed by student loan debt, and another man finding himself ghosted by a romantic interest.

This, it turns out, is an ad for Burger King.

The ad introduces a new collection of meals: There’s the Blue Meal, the DGAF Meal, the Salty Meal, the YAAAS Meal, and the Pissed Meal. (All meals contain the exact same food, by the way: A Whopper, fries, and a drink.)

Those names, like the new slogan of “No one is happy all the time” is a not-so-subtle dig at McDonald’s’ Happy Meals, apparently trying to frame that product as a manifestation of toxic positivity culture … or something.

The title of the video–which was shot on 35mm film, presumably highlight the gritty realness of a fast food campaign–is a play on their classic slogan, “Have it your way.”

With this campaign, Burger King becomes just the latest in a growing trend of brands using mental health issues as marketing tactics. Earlier this year, Sunny D tweeted out “I can’t do this anymore” and a number of other brands chimed in to help their friend-product through its rough patch.

Mood last night. All good MP thanks for checking in ily 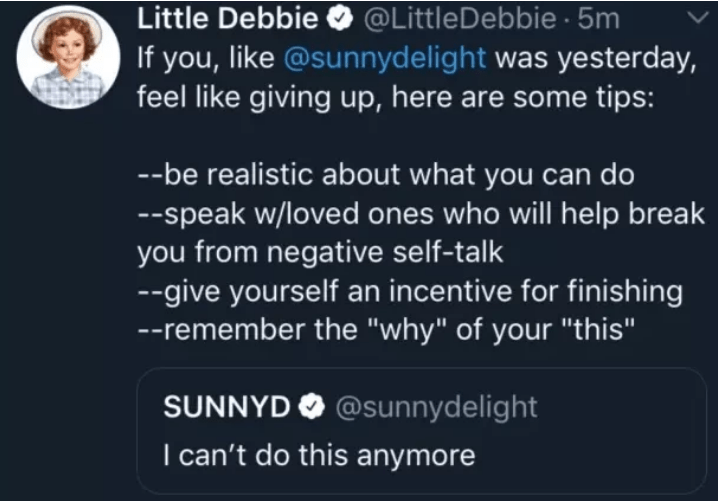 The journey towards humanizing brands (as with the actually hilarious Wendy’s Twitter account) took a sharp, weird turn somewhere along the way towards marketing mental health struggles.

why are so many young people flocking to brands on social media for love, guidance, and attention? I’ll tell you why. they’re isolated from real communities, working service jobs they hate while barely making ends meat, and are living w/ unchecked personal/mental health problems

While destigmatizing mental illness is essential, not all forms of communication on such a weighty issue are equal. Normalizing mental illness and creating a culture of comfort in talking about these things is great. Using these issues as a marketing hook to drive brand awareness and sell fast food is not.

feeling down? come to burger king where we pay our employees $8.70 an hour. we definitely care about mental health and this isn’t a cheap ploy to appear “woke” https://t.co/RgcCtNNwnM

Burger King’s new marketing strategy is “chicken nuggets is therapy and eating burgers is woke!” We love the commodification of our mental health crisis to sell some fries :) https://t.co/4KLe1l3MY4

One of the most glaring issues with this sort of corporate hawking of mental health is that most giant corporations–and that includes Burger King–aren’t known for being especially concerned with their employees’ mental health and general well-being. First-person reports of the company’s pay and health benefits are not stellar.

In a 2014 op-ed for HuffPost, one employee said a typical day working at Burger King “is like hell. Pure hell.”

“I would love to see the wages get raised. But man, they’re so cheap,” he wrote.” That’s a multimillion-dollar corporation, Burger King, and they’re so cheap. They’re real cheap.”

So maybe Burger King should look at actually improving the lives of its employees before attempting to pass itself off as an ambassador of woke mental health culture.