What Buffy’s Anya Jenkins Can Teach Us About Rage, Grief, and Strength in 2016 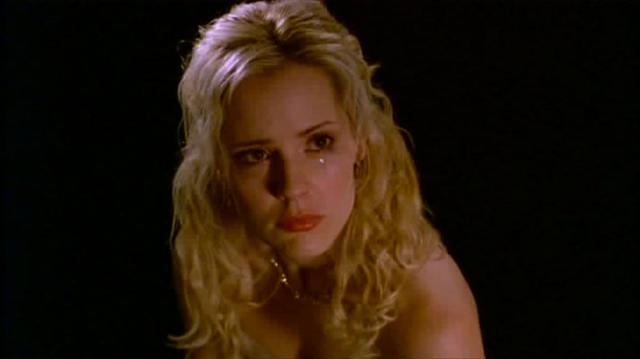 December 8th marks the anniversary of Anya’s first appearance on the Joss Whedon series Buffy the Vampire Slayer. “The Wish” was a parable of being careful what you wish for, and is most notable for introducing her character, a vengeance demon that helps scorned women punish the men who wrong them. After she fails to carry out her job correctly, she is stripped of her powers and becomes human again for the first time in hundreds of years. From there, she has to teach herself (and, of course, her audience) what it really means to be a human woman in this world. I may be coming from a place of bias here, but she’s an extremely important character who deserved better than (Spoiler Alert, even though it’s been over for 13 years) to be killed off in the show’s finale.

To plenty of lost young women on and off the show, Anya has been a kind of hero— and she’s one we need to help us shovel through the shit in these deeply troubling times. As women in the United States right now, we feel like Anya did when her powers were stripped away: lost, scared, and pissed as all hell. At her worst, we can see our own suffering mirrored in hers, and can only hope for the kind of resilience she displays. At her best, she’s Donald Trump’s worst nightmare: powerful, furious, with an intensely strong sense of justice.

Anya unabashedly feels her anger, pain, rage, grief, and hurt; she’s a full embodiment of all our “ugly” emotions. She’s everything that men have ever tried to write off as “crazy”, and she doesn’t give a fuck, she knows when she’s justified and she knows when she’s right. As dated as Buffy may be in many aspects (whitewashing, refusing to use the word “bisexual,” etc.), Anya has lessons to teach us that are just as timely toward the end of 2016 as they have ever been.

A deeply memorable Anya moment is her heart-wrenching journey in the season five episode “The Body.” While it deals with a very specific personal tragedy rather than a cornucopia of garbage like 2016, the response is still very much applicable. Anya does something very unique and relevant in this episode: she says what needs to be said, even though it makes everyone around her uncomfortable. She delivers her concerns about the reality of mortality in the series’ arguably most painful monologue, and she doesn’t let up at all. She’s upset, she’s grieving, and she demands an explanation.

In the wake of events that break our hearts, we can take a leaf from Anya’s book: don’t normalize tragedy, and don’t let injustices slide. When shit’s messed up, it’s not wrong to point that out. Make people face the reality, acknowledge what is wrong and call it out. The only way for a wound to heal is to let it breathe, and the only way to get injustice corrected is to force its acknowledgement.

Emotions are running high as of late, particularly a sort of righteous fury at a system that seems broken. Take that anger at poisonous ideals and nightmare scenarios, and turn it toward something concrete. I’m not suggesting you eviscerate a politician (even though Anya probably would), but sitting around stewing in your rage only hurts you. Harness that energy, chaotic and confusing though it may be, and turn it toward a purpose. Though female vengeance in the wake of 2016 must be decidedly less biblical than we might want, we can do our small part to take the power back, and we can refuse to be quiet about it. For example, if you’re a fan of poetic justice (a la vengeance demon), you can make a donation to Planned Parenthood and have the certificate sent to Mike Pence or one of your Trump-voting relatives. Just saying. Yes, it’s a little petty, but it’s also productive…and won’t it feel so good?

If you’re an avid Buffy fan, you’re likely familiar with Anya’s straightforward seduction of Xander: dropping her clothes to the floor and asking him to have sex with her. In a world that continues to criticize women for being sexually free, Anya has no time for Puritanical mores. Tamy Burnett, a doctor of gender studies, has pointed out the fact that this quality is unique to Anya in the Buffyverse, saying: “Anya… stands alone as the only woman in the Buffyverse to remain unshamed and unpunished for her expressions of sexuality.” She continues: “Anya’s attitude toward sexual desire marks her as transgressing traditional forms of female sexuality, a significant break to the pattern by which other women on the show are constrained.”

With figures like Mike Pence in public office trying their darnedest to tell women what they can and can’t do with their bodies, Anya’s example is a particularly appealing one. Do whatever you want (with consent, of course), and take charge of both your body and your sexuality. Expressing that freedom can be a form of protest in and of itself, and is a tangible way to reclaim your sense of agency in an uncertain world.

Finally, although the temptation is to get cynical, don’t let your pain make you hard. Take the time to grieve, no one can or should cut that short, but don’t let the rage take away your willingness to express and to love. In spite of everything: going from human to demon to human to demon again, getting left at the altar and having her heart stepped on, and countless other losses, Anya sacrifices herself for the greater good at the end of the series. Please don’t give up your life or anything, that is absolutely not the lesson you should take from her sacrifice. The moral I’m trying to convey is: save others in order to save yourself as well.

When you give your energy to what you believe in, what you love, and what will bring about good, then you can be satisfied that you are canceling out the evil. While you’re raising your voice, while you’re smiting oppressive structures to dust, throw yourself into the good. It’s the only way to conquer the forces of darkness.

Addison Peacock was born in Atlanta, Georgia, but grew up in the beautiful Shenandoah Valley in Northern Virginia. She is in the process of earning her BFA in Musical Theatre from Shenandoah Conservatory, where she trains as an actor, singer, and dancer. You can find Addison watching and debating the worst movies on Rotten Tomatoes on her comedy podcast Zero to Zero, and voice acting on The Nosleep Podcast.