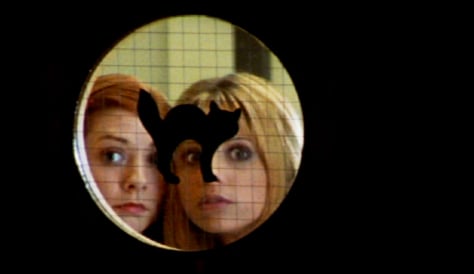 If you think back, really search in your memory, you may recall a little show called Buffy the Vampire Slayer. Vampires? Demons? Watchers? Slayers? The Scooby Gang? Any of those ringing a bell? Oh, you’re obsessed with it, consider seeing it a major event in your life, and know the lore backwards and forwards? Yeah, welcome to the club.

Some of us saw Buffy as it aired, some of us found it on Netflix, and though it may seem impossible to the super-fans, some of us have yet to discover the soothing power of Anthony Stewart Head’s voice for the first time.

Now that it’s officially Halloween, what better time to come back home to Sunnydale? Whether it’s been a few years since your last viewing or a few months (a few days?), Halloween is the best time to jump back into the Buffy-verse. Maybe you’re doing a rewatch with someone who’s new to the show (I’m doing this with my sister right now), or maybe you want to spend some private quality time with your favorite characters. No matter the reason, check out these seven things to look forward to as you get ready for your Netflix marathon…but also keep in mind that nostalgia goggles can be blinding, and Buffy has some flaws that really shouldn’t be ignored.

Be prepared for some mild to moderate spoilers if you want to really re-live your first viewing.

1. Buffy
Who else to take the top spot but the Slayer herself? Buffy is the queen of kicking demon ass, sure, but she doesn’t get enough credit for her brilliant puns or her ability to wear that sticky 2000’s lipgloss without getting her hair stuck in it.

3. Willow/Tara, but also Willow/Oz
The relationship between Tara and Willow on Buffy was groundbreaking; they were the first recurring lesbian couple on network TV, and their relationship was given the same weight and positive attention as other relationships on the show. Before Tara, Oz was a great character with healthy boundaries and not a trace of Xander’s Nice Guy tendencies. We need more male characters like Oz and fewer like Riley.

4. The monsters of the week
Buffy was one of the best monster-of-the-week shows ever. Some episodes work better than others, but when done well (and it very often is) the demon du jour plays well with the overall themes of the season and is also a fun, self-contained storyline.

5. Cordelia and Anya
The first time I saw Buffy, I don’t think I appreciated Cordy or Anya nearly enough. They’re both framed as fussy, materialistic mean girls (or demonic, as the case may be) but they get some of the best material, and in 2016 I’m less inclined to buy the whole “girly-girls are bad” trope. They’re funny, they know what they want, and they speak their minds even if it’s not what the Scoobies want to hear. And both of them deserved way better than Xander.

6. Giles/ Anthony Stewart Head
Both the man and the character are delightful. Giles, in his tweed suits and his English stuffiness, still fits in perfectly with the gang of teenage Scoobies. Anthony Head gives a wonderfully understated and nuanced performance as a Watcher becoming part of a family. There’s no downside here!

7. Spike or Angel
OK, neither of these two characters is perfect. Upon rewatching, Angel has some very stalker-y Edward Cullen tendencies that are never addressed and Spike…well, we all know what happened there. But these are fictional characters, and you’re allowed to enjoy the good while criticizing what the writers could or should have done better. So take your pick: are you team Brooding and Angst-Ridden or team Snarky and Romantic?

Part of watching something nostalgic is noticing flaws you never saw before, when you were a kid or when cultural conversations around privilege and social issues weren’t what they are now. And that’s OK to the extent that you don’t allow your fuzzy feelings to blind you to the flaws. With that in mind, here are three (big) things about Buffy that are less than amazing.

The way it treats sex
The first point of reference in Jenny Trout’s excellent Buffy recap series “The Big Damn Buffy Rewatch” is that “sex is the real villain of the Buffy the Vampire Slayer universe,” which is a spot-on observation of how Buffy treats sex and sexuality. On Buffy, sex often tends to be something that’s coded as villainous (see: Faith and Spike), or otherwise dangerous, and there’s a lot of slut-shaming and victim blaming. Which brings us to the next point…

The way it treats women
Can the myth that Joss Whedon is King of the Nerdy Feminists just die already? Stop giving male creators brownie points for not being Zack Snyder. Yes, Buffy was very progressive for its time, but the way some people talk about it you’d think it was up there with Gender Trouble as this seminal feminist text, and it’s just not. And while we’re here, with all of the wonderful things that came from Tara/Willow, Buffy had its own share of homophobia and a Willow-sized helping of bisexual erasure along with it.

The way it treats race
So… why was there only one black slayer, why did she need a goofy accent, and why did she need to be killed off? What’s this about a murderous Incan mummy princess who is here to kill wholesome American boys? And an evil “tribal mask”? Oh, wait, there was more than one black slayer, that’s right; she’s depicted as a savage and is barely able to vocalize beyond a snarl. How nice.

There’s nothing wrong with loving something that you also recognize to be problematic. And it’s natural to notice some other flaws that you missed before, like inconsistencies in the Slayer lore, or the nonsensical nature of the Watcher’s council. Despite its flaws (or even because of them), given the opportunity for discussion, there is still plenty of joy to be had in a Buffy rewatch. For many people it’s right up there with Harry Potter as a fictional universe that often feels more like home than your real one. So have a happy Halloween Buffy viewing party, and don’t forget your stakes if you go out on patrol!

Chelsea Ennen holds a master’s in Contemporary Literature, Theory, and Culture from King’s College London. Her writing has appeared on The Female Gaze and HelloGiggles. She is an editorial fellow at The Tempest, and the fiction editor at the Kaaterskill Basin Literary Journal. Follow her on Twitter (@ChelseaEnnen) for updates on her creative work and inane pop culture commentary.