"Earshot" is more relevant than ever. 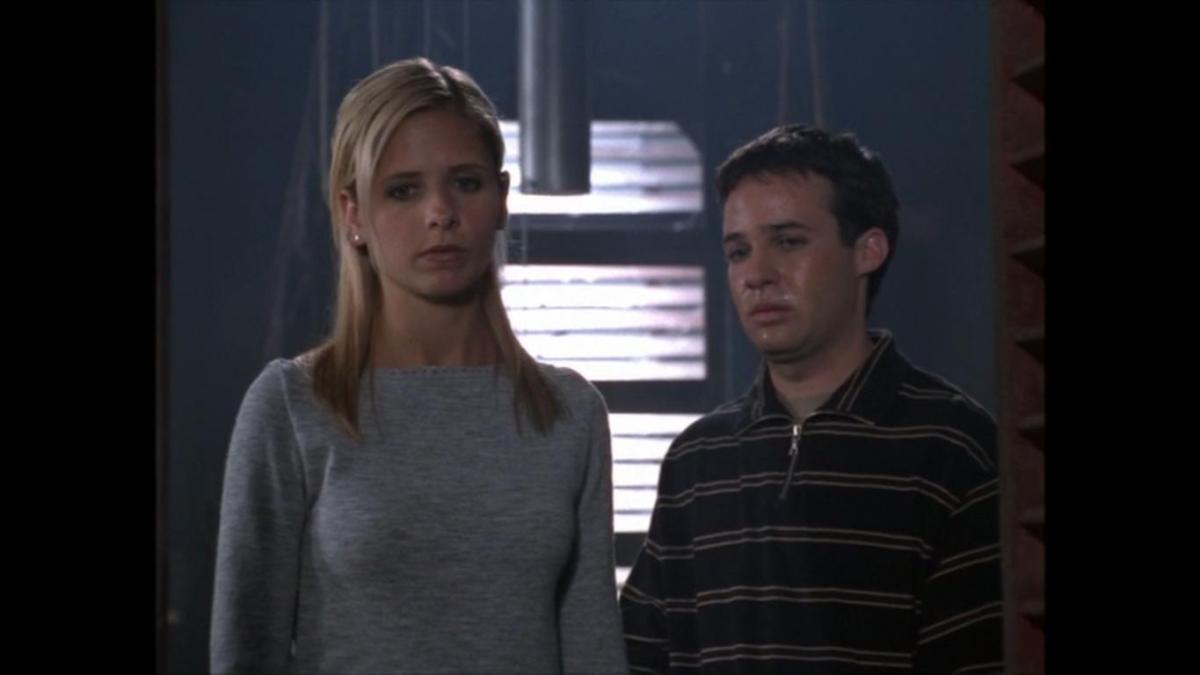 “Earshot,” the season three episode of Buffy: The Vampire Slayer, is infamous for some not-great reasons. The episode was initially set to air right after the Columbine school shooting in April of 1999, but it was shelved until September due to a plotline that involved Buffy, who gets telepathic powers for the episode, seemingly thwarting a school shooting. In the episode, it turns out that she stopped a suicide, not a school massacre, but it was still too close to real trauma at the time.

Now, watching “Earshot,” its story feels incredibly prescient, not because school shootings have only become worse since 1999, but because Buffy’s struggle with suddenly knowing everyone’s private thoughts and how that nearly kills her feels a lot like living with social media in the hellscape of 2020.

In “Earshot,” Buffy gains the power to hear everyone’s thoughts thanks to getting splashed with some demon blood, like ya do. And at first, it’s cool to hear what all her friends are thinking. Cordelia always says what’s in her mind, Oz is a deep philosopher. It’s cute and fun and it’s exactly like the good side of being on social media. You feel connected to people, on a deep level, you feel like with every tweet you get to know others as they truly are. It’s entertaining! It makes you feel less alone!

But then you hit the dark side, like Buffy does. When we participate in social media, we’re literally letting other people’s thoughts into our heads and we do it with no filters and often, no discernment. We see the tweets of a rando with nine followers and our friends from middle school alongside the posts by world leaders and venerated publications, and it all looks and feels the same. And we take each comment with the same degree of seriousness. Our brains can’t process these differences, and also because when we read a story or perhaps even see a tweet, our poor tired minds have trouble distinguishing between truth and fiction—and more importantly, between our emotions and the emotions of others.

And it’s not just that everything is equal on social media. It’s that it’s relentless, painful, pessimistic, uninformed and it never ever ends. We don’t need demon blood to open up our minds to an onslaught nowadays. It’s already there. And I’m not saying it’s bad in and of itself to stay connected and informed, but just as Buffy learns, it becomes overwhelming and maddening when there’s no limit or filter to the information and feelings you’re getting.

“It’s an invasion of my head, it’s like there are these strangers walking around in there,” Buffy says. And at the time that was just a guess from Joss Whedon and episode writer Jane Espenson about what hearing others’ thoughts would feel like, but now it’s what we deal with every day, as we inject the rage and anxiety and bad takes of hundreds, if not thousands of people directly into our brains.

It’s hard to turn those voices off once you let them in. Social media is addictive, quite literally. And right now, during the pandemic, when so many of us have been cut off from regular social interactions, social media is the only avenue we have to feel connected to the outside world. And when there’s a new utterly bonkers news story every five minutes, the fear of missing out on the news is very real. It becomes almost impossible to shut down the cacophony of voices, just like it was for Buffy.

That deafening roar? Just like in Buffy’s case it can hide real, legitimate threats to safety. And just like Buffy, the sheer volume of the information and raw emotion we’re processing on social media can make it impossible to tell who made a real threat and if it’s going to mean someone will really get hurt. And it also means we are constantly seeing cries for help.

In Buffy’s case, she’s able to intervene and stop Johnathan, the constant victim of bullies and monsters, from killing himself. In one of the moments that shows Buffy is a hero because of her heart, not her powers, she talks down to Johnathan with a reminder that literally everyone is suffering too.

“Every single person down there is ignoring your pain because they’re too busy with their own.” And again, that could be about 2020. Because as much as we absorb and take on the suffering of others via social media, we don’t really know how to help. We often just add to the chorus, we echo and magnify the pain and despair some days until it feels like there’s nothing else.

But we have to step back. We have to find our inner Buffy and listen to ourselves. Sometimes that means making the very hard choice to go offline. Sometimes that means having extremely hard conversations with friends who you are worried will harm themselves and helping them find resources. But it’s really hard to listen to those who need us or listen to our own needs when the rest of the world is screaming in our minds via a little blue bird app.

What can we learn here? Well, I think there are lessons here about compassion for others, but also compassion and kindness for yourself. And sometimes that’s much harder. Shutting off the voices is hard, especially when hearing them gives you a sense of belonging, identity, and even power. But knowing what everyone’s thinking isn’t actually the same as being able to change what they’re thinking, though it’s so tempting to believe that. If you cut through the BS, you can be your own hero, but you also need to give and receive help. It’s a tough balance, but you can do it.

Oh and your watcher slept with your mom. Surprise!