Welcome to the quiet village of Sugar Bunting. Every fourteen years, this sweet-toothed hamlet and its neighboring towns are visited by Mog Chothra, a nasty Lovecraftian behemoth with an enormous appetite. The peace is kept through the Maidens’ Feast, in which the towns’ teenage girls are served up as monster snacks. Though being devoured by Mog Chothra is a great honor, intended sacrifice Vella is having second thoughts. The fancy dress is okay, and she wants to make her family proud…but couldn’t she just kill the thing instead?

Meanwhile, space-traveling Shay is stuck in a rut. He’s the sole inhabitant of a ship designed to keep him safe and happy. Trouble is, the ship hasn’t noticed that Shay has gotten older. A lot older. He’s outgrown his high chair. His navigational controls are squeaky toys. The ship’s computer — who really wishes he’d call her “Mom” — designs simulated adventures for him, each more saccharine than the last. Imagine a spacecraft built for the Teletubbies. Now raise a teenager in it.

Given the money that poured in and the hype that followed, I’m sure there are some who expect Double Fine’s long-awaited adventure game to bust genres and blow minds. It doesn’t. Broken Age is not a reinvention of the wheel. It’s the product of a sixteen-year-old recipe, little changed but still a delight. I knew what I wanted when I supported this game: a smart, charming point-and-click with offbeat humor and wacky puzzles. That’s exactly what I got. I wasn’t surprised by it. I wasn’t astounded. I was pleasantly, gleefully satisfied.

My backer copy of Broken Age (Act 1) arrived at a neat time for me. I’ve reviewed several adventure games in recent months, which create an interesting spectrum of comparison. On the one end, you’ve got The Walking Dead, which has put a lot of effort into paring down the traditional adventure game model. The Walking Dead: Season Two is fast, frantic, and nearly puzzle-free. On the opposite end, there’s Heroine’s Quest, about as old school as you can get without digging out your floppy disks. Broken Age falls somewhere between the two. It’s got a classic design, no doubt — mellow pacing, low-impact dialogue trees, inventory items with mysterious uses, puzzles that require you to ponder and backtrack and click on everything. But thankfully, classic doesn’t mean dated here. Broken Age has been carefully crafted to retain a familiar gameplay style without including the frustrations of old. Gone are the days of specifying whether you want to look at an item or actually use it. Gone are the clunky UIs and toolbars. Instead, a clean, inviting world, free of distractions and overlays. The inventory hides away neatly, and is never overfull. Useable items blend seamlessly into the storybook backgrounds, but are fairly easy to find. Tracing the cursor over the screen quickly reveals what can be clicked on. This game is built to flow. 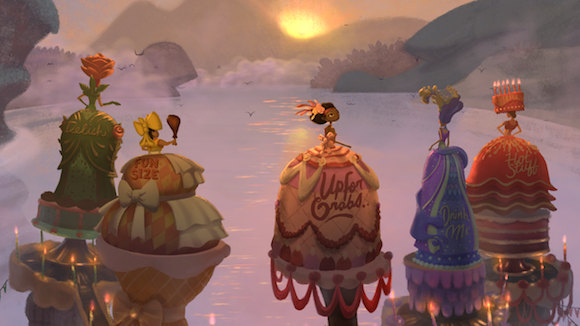 The only times the game made me grumble were during puzzles, which is how it should be. What good are puzzles if you don’t work for them? There’s no hint system available, but that, too, is right on the money. The whole point of an adventure game is to coax yourself into exploring strange and wonderful possibilities (Spoilery example: What are the practical applications of a holy tear gas canister after you’ve filled it with chum?). I found Broken Age to be a comfortable, laid-back challenge. Every answer is in plain sight. You just have to bend your brain a bit.

After I installed the game, I decided to give it a whirl for an hour or so. I wound up barreling through in one grinning gulp. While the gameplay is smooth, the story is what makes Broken Age click. Vella and Shay are easy to cheer for. Coming-of-age stories are as old as the hills, but Double Fine has made these two feel fresh. They’re both tales of young adults whose families don’t understand them, but their adventures are unique. The player is allowed to swap between the two stories at will, which not only provides a nice avenue for escape when a puzzle stumps you, but also highlights the subtly similar threads. You can play each story uninterrupted, but I don’t recommend it. Back-and-forth is the way to go. The shift in narrative feels a little odd at first, but quickly falls into an engaging harmony. I liked the thoughtful struggle in Vella, determined to change things but concerned for her town’s safety. (I also liked the casual inclusion of her mixed-race family. Hooray!) I sympathized with Shay, sheltered and lonely, but still more naive than he likes to think. As for the trimmings, it’s hard to not be won over by Double Fine’s signature weirdness. This game includes chatty cutlery, whipped cream guns, hats festooned with fresh baguettes, cloud-dwelling hippies, yarn-bombed spaceship interiors, an avian rescue squad known as “whoops-a-birdies,” daffy temple guardians, enthusiastic transporters, a breakfast cereal gag that I am still giggling over, and smartassery at every turn. I’m not acquainted with Double Fine’s dev team, but I think it’s fair to say they’re a talented bunch of goofballs.

The game ends with expected abruptness, leaving the door open for Act 2. Despite the cliffhanger, Act 1 is a satisfying journey, and a happy promise of things to come. I can think of no better compliment for this game than my reaction when the credits rolled: bummed out that it’s over for now, glad that it’s not over yet.

Broken Age will be released on January 28 for Windows, Mac, and Linux.