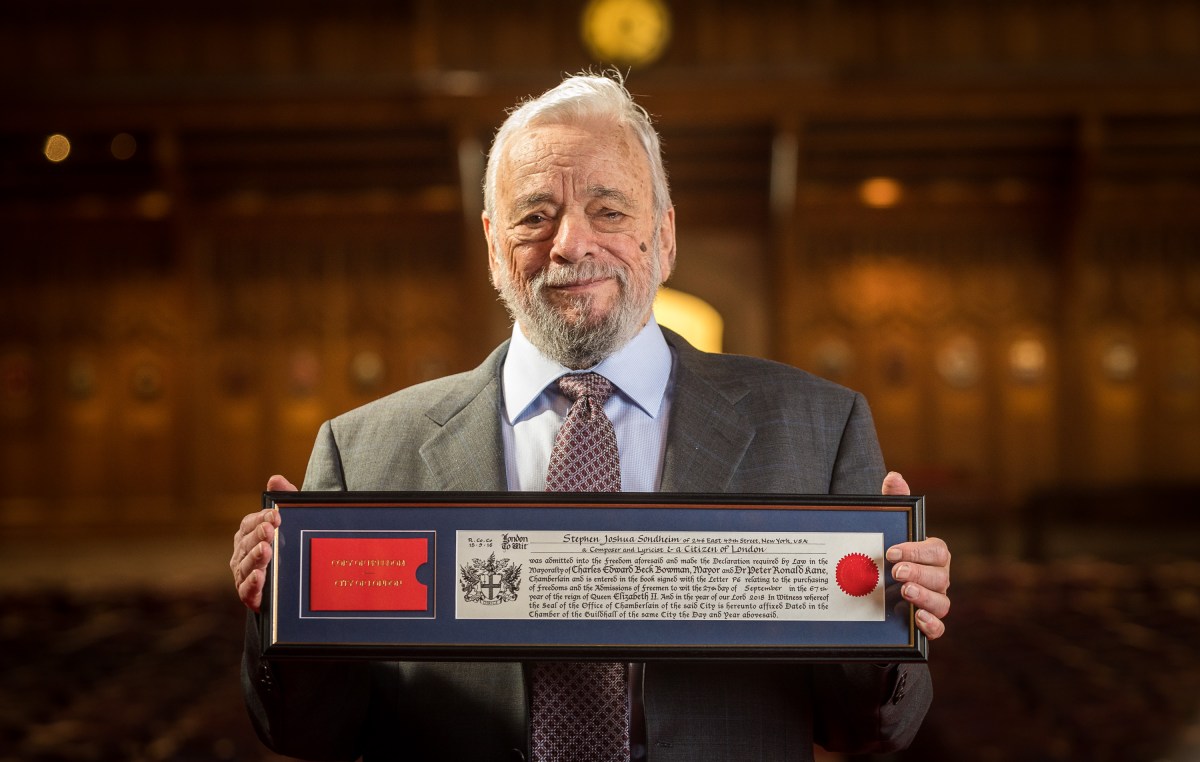 Few names are more revered or beloved in musical theater than Stephen Sondheim. The legendary composer and lyricist revolutionized the genre, creating an enormous body of work the likes of which are simply unparalleled. Sondheim had a hand in the greatest musicals of the past century, from his early work writing lyrics for West Side Story and Gypsy, to his genre-defining shows Company, Sweeney Todd, Into the Woods, Sunday in the Park with George, Assassins, and many more.

Sondheim passed away yesterday at 91 years old, leaving a legacy that includes nine Tony Awards, a Pulitzer Prize, an Oscar and eight Grammys. And more than that, Sondheim had a reputation as a thoughtful and generous artist and a consummate gentleman. Stars of stage and film paid homage to Sondheim on social media, remembering the titan of Broadway. May his memory be a blessing.

Thank the Lord that Sondheim lived to be 91 years old so he had the time to write such wonderful music and GREAT lyrics! May he Rest In Peace🥲🎵 🎶🎵 pic.twitter.com/vshNSdkvpQ

Farewell Steve, the musical theatre giant of our times, an inspiration not just to two but to three generations. Your contribution to theatre will never be equalled. – ALW

A giant of the stage is gone, but his work will live with us forever. Isn’t it lovely how artists can capture us? Thank you for The Hat, Steve. #ChildrenandArt https://t.co/lbNOntzTJN

& last week, when I wrote him to say his ears must be burning from the countless Sondheim kindnesses being shared from the generations of writers he mentored, he wrote this in reply.
Steve: you repaid your debt to Oscar 1000 times over. We love you. I love you. THANK YOU. -LMM pic.twitter.com/6aeHW4CWFH

Perhaps not since April 23rd of 1616 has theater lost such a revolutionary voice. Thank you Mr. Sondheim for your Demon Barber, some Night Music, a Sunday in the Park, Company, fun at a Forum, a trip Into the Woods and telling us a West Side Story. RIP. 🙏 https://t.co/jHX7ob9JWv

Stephen Sondheim was the best there ever was. I don’t know when we will ever have another of his caliber, of his breadth and scope. Just the greatest, a legend, a true titan. Rest In Peace. ❤️

Every so often someone comes along that fundamentally shifts an entire art form. Stephen Sondheim was one of those. As millions mourn his passing I also want to express my gratitude for all he has given to me and so many more. Sending my love to his nearest and dearest. pic.twitter.com/4KlnJJJipq

“Thanks for everything we did /Everything that's past /Everything's that's over/Too fast. /None of it was wasted. /All of it will last:/ Everything that’s here and now and us together!”https://t.co/mr6KbrgJKp

I was just talking to someone a few nights ago about how much fun (and fucking difficult) it is to sing Stephen Sondheim. Performing his work has been among the greatest privileges of my career. A devastating loss.

He influenced all of us, whether we knew it or not. Rest In Peace. You were a gift to this world ♥️ #Sondheim pic.twitter.com/ajM0oU7zSQ

Goodbye dear sir. We will spend our lives trying to make you proud. #stephensondheim

Pacific Overtures with the great master himself. What an honor it was to perform your work. RIP Stephen Sondheim. pic.twitter.com/5MI2Y1JBLM

When I was 12 years old and going through a really hard time at home, I wrote a letter to my hero, Stephen Sondheim. I asked him for advice about a musical I was writing and enclosed a lengthy synopsis. I will never forget the day in January when I went to the mailbox pic.twitter.com/Pqsx1uT0sN

I am at a loss. Feels like the end of an era. He did indeed set the standard for the American musical.

He wrote me a wonderful permission letter to use “Old Friends” in American Gods. I avoided meeting him (failed only once) and refused dinner because I didn’t have many heroes. Now I’ve got one less. Thank you Stephen Sondheim so much. pic.twitter.com/soRo4G2ZFU

What’s your favorite Sondheim song? Let us know in the comments.