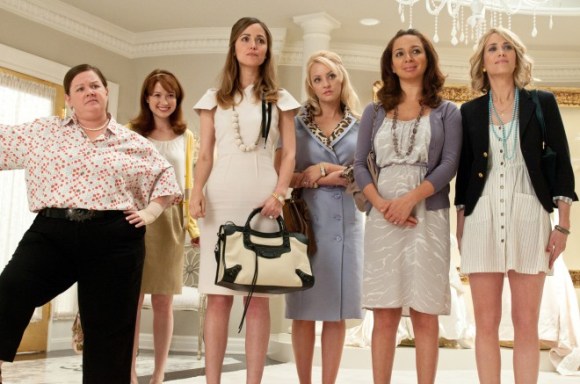 Like us, after being bombarded with trailers and ads for this weekend’s Bridesmaids, you were probably wondering if the movie was actually “The Hangover with women” or just being billed that way. Sure, it’s not a movie with a superhero in it, but it’s being marketed as an alternative to the chick flick for women, so we consider it to be close to our realm of coverage. We’re all savvy media consumers here, and we know that ads aren’t always what they seem. So when given a chance to check it out, we readily accepted and can tell you confidently: Bridesmaids is not Something Borrowed. It has neither Kate Hudson nor Katherine Heigl in it. It is not a “typical chick flick,” nor is it quite a “gratuitous gross-out comedy.” This is safe territory. We would never lead you astray.

This movie, while not what you’d typically call “geeky,” could certainly be classified as “comedy geeky,” considering the cast, the people behind it, and the fact that those of us women closely connected to the comedy field finally have a movie where we get to tell the jokes and drive the story. And without the goal of romantic love. Finally.

That said: Bridesmaids is an awesome comedy featuring a predominantly female cast and will probably change how female-geared comedy movies will be viewed in the future. That’s the tiniest bit hyperbolic, but it’s been a long time since I, as a woman, walked out of a movie feeling like I was truly invited to the party.

Another thing to note before moving on with this review: Yes, it is about a wedding. Even I wasn’t thrilled about that. However, unlike other movies about weddings, the prize for our protagonist is not a man nor a ring. It is her best friend, another woman. Written by its star, Kristen Wiig, and her writing partner from her Groundlings days, Annie Mumolo, Bridesmaids should not be compared to the rom-com dreck that chick flicks usually turn out to be. But it could be compared to Wedding Crashers, which is a “dude flick” that also happens to be centered around a wedding. The common thread between them, however, is not the wedding — it’s the relationship between the lead characters. Best friends, since childhood. And now, one of them is starting to head down a different path. When we meet Annie (Wiig) in Bridesmaids, she is in a pointless relationship, a bad job, and an obnoxious roommate situation. She and her best friend Lillian (Maya Rudolph) both seem to feel like they’re in a rut. And then Lillian announces her engagement.

Getting married is undeniably a huge milestone in the lives of adults, whether we are the ones getting married or not. Annie doesn’t really seem to be in a rush to get married, especially not to the guy she’s with in the beginning. And while she doesn’t ever seem to think that marriage is something she also needs to do, she’s not opposed to it. (Like all those “I don’t need a man!” girls in chick flicks who end up finding The Perfect Man that she “needed all along.” Barf.) Her biggest concern is money, right up there with the possibility of her relationship with her best friend changing.

Annie’s worries are given physical form in the character of Helen, Lillian’s other best friend. Helen is married and filthy rich, and can afford to do all the things Annie can’t do for Lillian, the satirical version of all those perfect women in the movies that this movie avoided becoming.

There’s another part of this movie that makes it different and special — Annie is pretty miserable, but she’s sympathetic without being pathetic. She’s genuinely fighting for this friendship to remain the same. It also helps that Kristen Wiig is a seriously accessible actor. It sounds corny, a total cliche, but you really want to root for her. You just want something to go right for her.

And (spoilers? did you ever doubt?) something actually does go right for her, after a lot of not-even-wedding-related bumps. And she does get a man at the end, but her relationship is not the ultimate prize. It’s a bonus. Annie’s objective in Bridesmaids is never its male “lead” — it’s her best friend. It’s what they call in the “boy comedy world” a bromance, except it’s between two women. And in a recent Entertainment Weekly interview, Wiig and Rudolph really hoped that no one was going to call this a “sismance” or a “ladymance” (and we’re hoping that “homance” also remains out of the lexicon).

Now, let’s talk about the comedy. For a very long time, even while good female characters appear in predominantly male-casted comedy films (see: Leslie Mann, who happens to be producer Judd Apatow‘s wife), women are usually not the ones who get to tell the jokes. Women are “joke appreciators,” not “joke tellers.” And in even worse cases, they don’t even get to be funny and are cast as the “straight,” existing only to make the men look funny and/or sympathetic. (You know, so we can remain pretty and the boy can be the hero. Again: Barf.) Personally, I think Judd Apatow has done a good job with this since the women in his movies are given genuinely funny lines and moments of their own. With the exception of Knocked Up, however, they just haven’t been the lead; they’ve been the supporting cast. But Wiig, Mann, Charlene Yi, Catherine Keener, Jane Lynch, and plenty more have some of the most memorable moments. Bridesmaids finally put good comedic female characters front and center with the men in (still good) supporting roles.

Now, about that gross-out scene you might have heard about. Some might think that the food-poisoning scene is there for the sole reason of giving the girls an equally gross scene as the boys get, for the very sake of giving the girls a gross scene. I disagree. For one thing, food poisoning happens. To all humans. It happens to the best of us. And not when we’d like. In fact, there are exactly zero good opportunities for food poisoning to happen. Anyway — The gross-out scene in Bridesmaids pushed the envelope, taking our ladies down to a supremely humbling place. And it was just the beginning of Annie’s failed attempts at giving her best friend a perfect wedding. And even worse … it gets worse. It’s a tone-setting scene. Maybe they could have done something different, but a bunch of women having food-poisoning all over each other in a high-end bridal shop is a pretty telling sign of things to come.

Very few movies are perfect. And Bridesmaids does fall into the “stereotype” trap with its supporting characters: the naive newlywed (The Office‘s Ellie Kemper), the jaded wife and mother (Reno 911‘s Wendi McLendon-Covey), the unfeminine overweight girl (Mike and Molly‘s Melissa McCarthy), the ultra feminine rich girl (Byrne), etc. (Can we pause for a moment to acknowledge this army of amazing actors? Wow.) And there was definitely a sense that they each had more of a story that ended up on the cutting room floor. (A standard occurrence so we don’t end up watching a three-hour movie.) But despite being such cliches, they were all still funny. Especially McCarthy. She’s hysterical, and she’s secure in who she is, and I like watching her because I don’t see my own insecurities in her. Meghan frees us from that in a movie that’s mostly about Annie’s neuroses, and in the end, she is the one who picks up a lot of Annie’s pieces.

Here is the bottom line about Bridesmaids: Women who feel like they have been left sitting on the sidelines when it comes to anything — gaming, science fiction, fantasy, comics, sports, anything — will appreciate what this movie has done for us in the comedy arena. The Sweetest Thing tried this, but failed when the ultimate prize turned out to be romance. This movie is about friendship, change, insecurity, and ultimately, just accepting what life hands to you. At the end of the movie, Wiig says she’s going to be fine. And isn’t that all we really want?