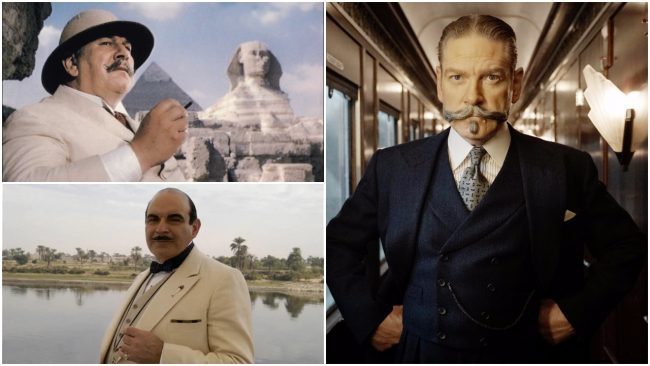 The new Murder on the Orient Express hasn’t been a blockbuster blowout, but it didn’t fail, either, taking in about $150 million worldwide so far on a $50 million budget. As a result, 20th Century Fox has ordered up more Herculean adventures. Oui!

Like many Christie works, Death on the Nile features a broad and colorful cast of characters that span diverse backgrounds and social classes, which gives Branagh the opportunity to recruit a whole new group of A-listers as he did with Orient Express. Screenwriter Michael Green will be joining Branagh again for this “sequel.”

Here’s the synopsis from agathachristie.com:

The tranquillity of a cruise along the Nile was shattered by the discovery that Linnet Ridgeway had been shot through the head. She was young, stylish and beautiful. A girl who had everything…until she lost her life. Hercule Poirot recalled an earlier outburst by a fellow passenger: “I’d like to put my dear little pistol against her head and just press the trigger.” Yet in this exotic setting nothing was ever quite what it seemed.

I’m a big fan of Death on the Nile in all of its incarnations—book, 1978 movie that stars Peter Ustinov as Poirot (and includes names like Angela Lansbury, Mia Farrow, and Maggie Smith), and the 2004 ITV Poirot journey down the Nile with David Suchet (and Emily Blunt as Linnet!). Considering Branagh’s taste for sumptuous backdrops and big set pieces, Nile seems like a good way to go: not only do you have a luxury steamship to play with, but the potential to visit the Pyramids and antiquities of Egypt in flashbacks and new scenes. Just please tone down some of the explosive theatrics, please. I don’t want to see Poirot wrestling with a crocodile.

Hercule Poirot appears in 33 Christie novels, one play, and more than 55 short stories. If Death on the Nile performs well, we could enter into a Poirot film franchise that has the potential to last until the sun dies and our world is consumed by ice. I’m cool with it.