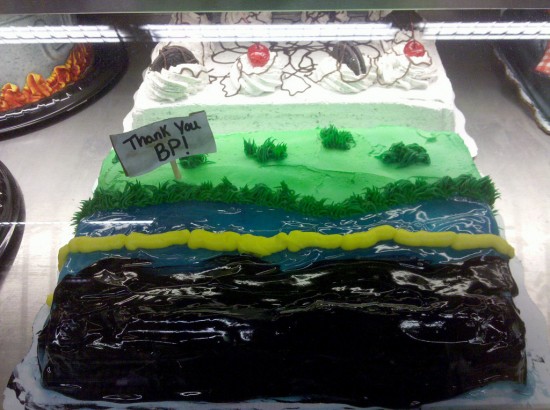 One Breaux Mart grocery store in Louisiana was spotted carrying this darkly comedic political statement of a cake. (This has got to be the only time anyone has ever written “darkly comedic political statement of a cake.” –Ed.) Bearing a sign that reads “Thank You BP!” it depicts dark, shiny oil-frosting encroaching upon shiny blue water-frosting at the shore of the grass-frostinged plain, while clouds of Oreo, whipped cream, and cherry look helplessly on.

Some may cringe at this confectionary handling of an event as grave as the BP oil spill, but 1) it’s no worse than what you’d see in many political cartoons, and the medium is a good deal more creative, and 2) at this point, Louisiana has earned the right. Though we probably wouldn’t want to eat it, what with all that frosting.