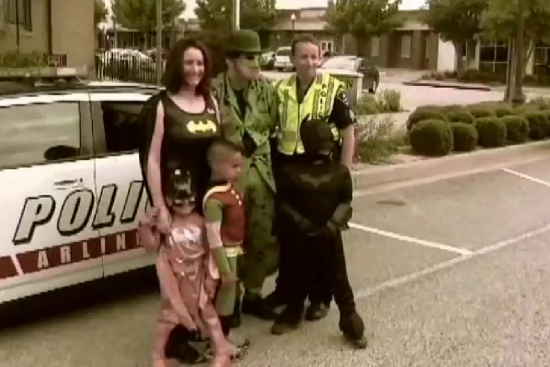 Every child wants to be a superhero at some point, but few actually get the opportunity to do it. Kye of Arlington, Texas, who suffers from leukemia, had the distinct good fortune of getting to be the caped crusader for a day and bringing two villains to justice. The stunt was organized by the nonprofit organization A Wish With Wings, which helped wrangle up some camera men, and the local police, who helped little Batman wrangle some baddies.

Over the course of his busy day, Kye managed to catch The Joker mid bank robbery, stop a purse-snatcher, and prevent The Riddler from blowing up a car near City Hall. Why The Riddler opted to bomb the car and not the building itself is anyone’s guess. On top of a day of complete and utter success in ridding Arlington of its terrifying new criminals, Kye also received a key to the city, thereby accomplishing just about everything short of getting actual superpowers, which as we all know, Batman doesn’t have.

During the key ceremony, Kye allowed himself to be unmasked, so there’s no telling where his superhero career might be going next. He may call it quits, or who knows, he might pull a Tony Stark. Either way, he’s certainly accomplished at least as much as the the full-sized Batman does in feature films. What did you do today?

(via The Daily Caller)