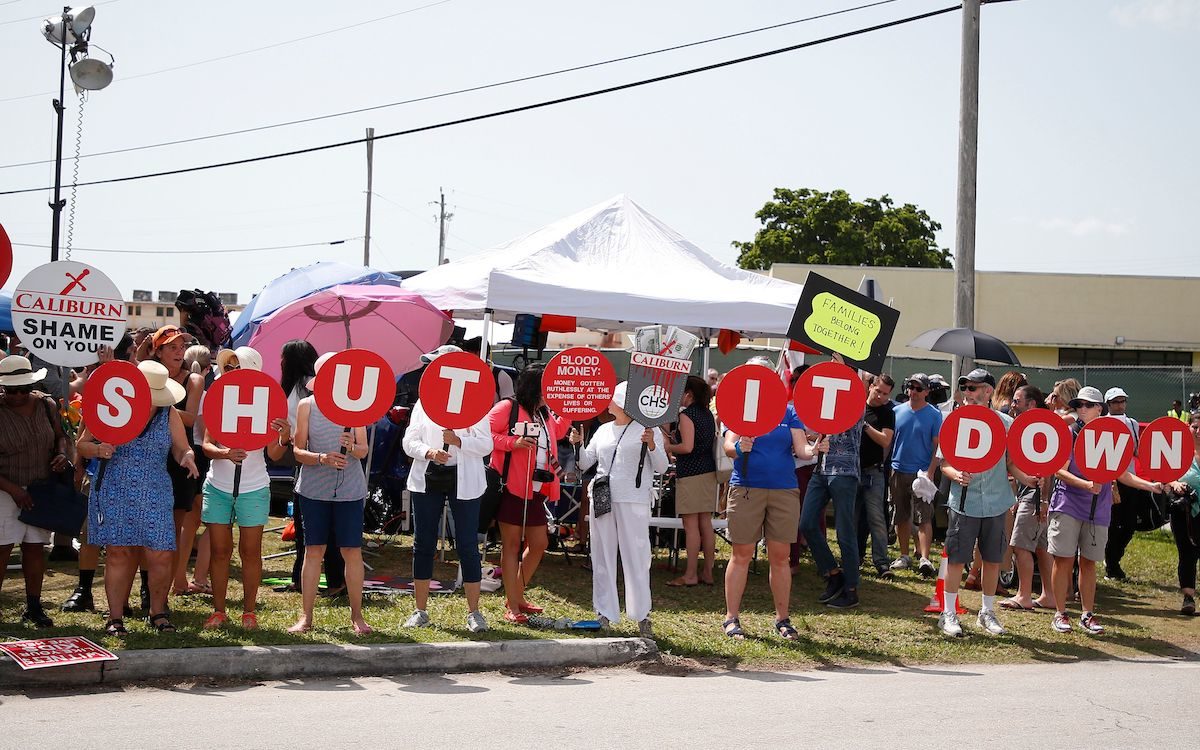 ProPublica, an independent journalistic watchdog monitoring abuses of power, has published an exposé on a private Facebook group for Border Control agents. Members post memes and messages about detainees, mocking the deaths of immigrants and asylum-seekers in custody and joking about throwing burritos at Latinx lawmakers, whom they refer to as “hoes,” visiting the camps.

One member posted a photoshopped image of Donald Trump forcing Alexandria Ocasio-Cortez to perform oral sex and as a warning, that disturbing image appears in the ProPublica article. There is apparently also another image in the group of AOC performing oral sex on an immigrant with the caption “Lucky Illegal Immigrant Glory Hole Special Starring AOC.”

The group boasts 9,500 members—nearly half the number of Border Patrol agents in the country.

The Border Patrol has the lowest percentage of female members of any federal agency. Just 5% of agents are women—less than the Marines. And after being given such a clear window into the mindset of the agency’s members, we can’t wonder why.

According to Ocasio-Cortez, who joined fellow Democrats to tour migrant camp facilities even after the article dropped, these attitudes aren’t relegated to the internet. This isn’t just dudes blowing off steam. The pervasive racism and misogyny are on full display in the camps.

I see why CBP officers were being so physically &sexually threatening towards me.

Officers were keeping women in cells w/ no water & had told them to drink out of the toilets.

This was them on their GOOD behavior in front of members of Congress.

Rep. Joaquin Castro, the head of the Congressional Hispanic Caucus, told ProPublica that the behavior in the Facebook group “confirms some of the worst criticisms of Customs and Border Protection. These are clearly agents who are desensitized to the point of being dangerous to migrants and their co-workers,” he said.

Now I’ve seen the inside of these facilities.

It’s not just the kids. It’s everyone. People drinking out of toilets, officers laughing in front of members Congress.

I brought it up to their superiors. They said “officers are under stress & act out sometimes.” No accountability.

After I forced myself into a cell w/ women&began speaking to them, one of them described their treatment at the hands of officers as “psychological warfare” – waking them at odd hours for no reason, calling them wh*res, etc.

Tell me what about that is due to a “lack of funding?”

Now I’m on my way to Clint, where the Trump admin was denying children toothpaste and soap.

This has been horrifying so far. It is hard to understate the enormity of the problem. We’re talking systemic cruelty w/ a dehumanizing culture that treats them like animals.

Rep. Castro has called for the removal of the Border Patrol agents who took part in the “derogatory and sexist comments regarding immigrants and members of Congress.” House Homeland Security Chairman Bennie Thompson seconded the sentiment, saying in a statement, “The agents found to be responsible for these vile comments should no longer have the privilege of representing the United States of America in uniform.”

We’ll have to wait and see if anything actually comes of this. When it comes to the Trump administration—especially regarding immigration policies—accountability is a rare thing.

When we talk about agencies that are rotted to the core THIS is what we mean. CBP officers are charged with the care & custody of babies and families who they degrade and dehumanize. Don’t doubt I’ll be raising this today at Clint. Loudly. #closethecamps https://t.co/01wiND0kiV

Another woman detained by CBP has epilepsy but cannot even get the medication she needs. The humanitarian crisis is the one our government is creating. #DemsAtTheBorder

Meanwhile, activists are being arrested for trying to bring supplies to these captive children.

A grandmother in Fairfield, CA arrested trying to deliver toys and books to children who were separated from their parents and detained at the border.

She asked them “Why am I being arrested for wanting to offer comfort to a child?”

And others’ donations are being turned away.

That’s because the torturous conditions being reported in these camps aren’t about funding. If there was any doubt whatsoever that this was deliberate cruelty, well, 9,500 agents have now disproved that notion for good.