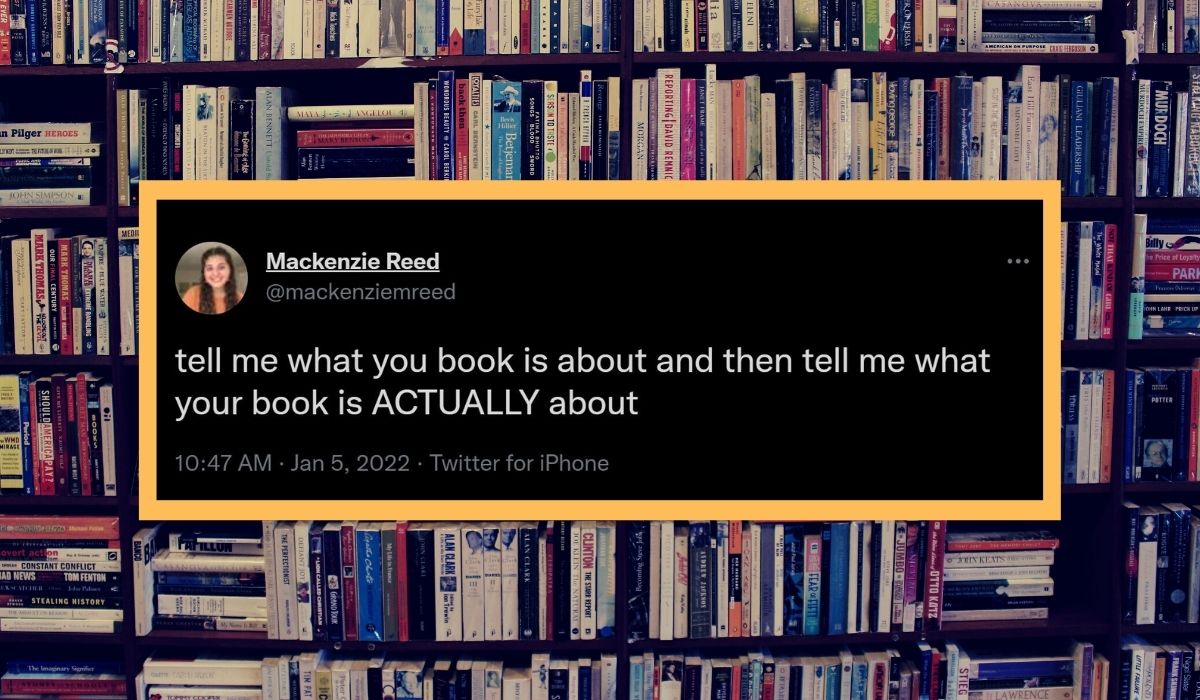 When marketing a book, authors and publishers need to rely on the action-oriented parts of the story to really pitch it to readers, librarians, and booksellers. The carefully crafted elevator pitches are going to miss elements of the story like themes and tropes (except romance, because y’all get straight to the point).

my book is about teens scouring a town for a missing fortune! So fun, so adventurous!

A lot of our favorite contemporary YA and adult Fantasy authors active on Twitter shared. These include the likes of Angeline Boulley (Firekeepers’ Daughter), Kalynn Bayron (This Poison Heart), and Ayana Gray (Beasts of Prey).

My book is about a teen investigating a drug devastating her Ojibwe community.

It’s ACTUALLY about Indigenous identity, how trauma+grief are overlooked in high-achieving children, &the jurisdictional quagmire denying justice to Indigenous victims of crime.#FirekeepersDaughter

This Poison Heart is about a girl with the power to control plants, a creepy estate in upstate NY, ancient gods, and family secrets.

TPH is actually about generational trauma, the value of platonic and familial relationships, and learning to lean on people when you need to. 💚 https://t.co/2bmkV83R8D

Beasts of Prey is about 2 Black teens going into a magical jungle to find a monster.

It’s also a story about 2 Black teens overcoming grief, trauma, fear, and learning to accept themselves as they are.

In addition to learning more about our favorite books, many authors shared details of upcoming releases. For example, A Song of Wraith and Ruins‘ author Rosanne Brown gives a sneak peek at her swing at a Rick Riordan Presents book.

(it’s also about a dog who is also a knife) https://t.co/qBUBOPKCuh

Independent authors, or those with debuts coming in the next year or so, also chimed in to simultaneously promote their books and give further insight into their themes and topics.

Here are some we have our eyes on:

THEY DROWN OUR DAUGHTERS is about a watery curse that trickles down through the female line of the Strand family.

It’s *actually* about how fucking hard it is to be a mom.

CHASING PACQUIAO is about a bullied queer teen who learns to defend himself by studying the fights of Manny Pacquiao, only to learn that his idol is homophobic.

ACTUALLY it’s about dismantling toxic masculinity and homophobia in the Fil-Am community and becoming your own hero. https://t.co/IsC3micWNq

We love a good story that forces us to challenge ourselves to view our real-life heroes as the messy (sometimes outright harmful) people they are. Pulido’s book, on the surface, looks to join the ranks of similar YA novels like John Green’s The Fault in Our Stars and Gabby Rivera’s Juliet Takes a Breath. (Now a graphic novel, too!) However, Chasing Pacquiao looks at how this plays in the Filipinx American community, with a focus on the experiences of young boys and toxic masculinity.

It’s actually about the double standards applied to girls when it comes to sex and cultural differences between first and second generation immigrants https://t.co/P0pXTfhC9N

Mine is a funny book about a high school election turned upside down by an international incident.

It’s ACTUALLY about proudly owning your identity when that identity has been trashed by the media.

Often, newer authors have little-to-no say anything outside the bounds of the actual story—not just the book blurb, but also the cover, typeface, and more.

Outside of these more cosmetic elements, publishing houses will sometimes try to push authors to reformat for a different audience or add something big to the story to make it “easier to market” based on trends. For example, days ago, some authors were lamenting their YA books were being pushed to include romances.

“All YA needs romance” is especially weird in juxtaposition with the “no fictional teens have sex” rule a lot of publishers have.

This is why I love this trend rekindled by Reed. We get to know more about the book from the author’s perspective in a way that is safer for them to discuss (not disrupting income), and it’s short enough to entice us further. Usually found in author talks, interviews, essays (like this newest one), and panels, these broader thematic topics are discussed at great length. Half of those are not always accessible, and sometimes you’ve gotta meet the people where they are at (Twitter, in this case).

Even with a few more tidbits of information directly from the author, we found many new books to add to our TBR lists and books-to-watch coming on.