This is Bad: The Bolivian Military Coup Explained 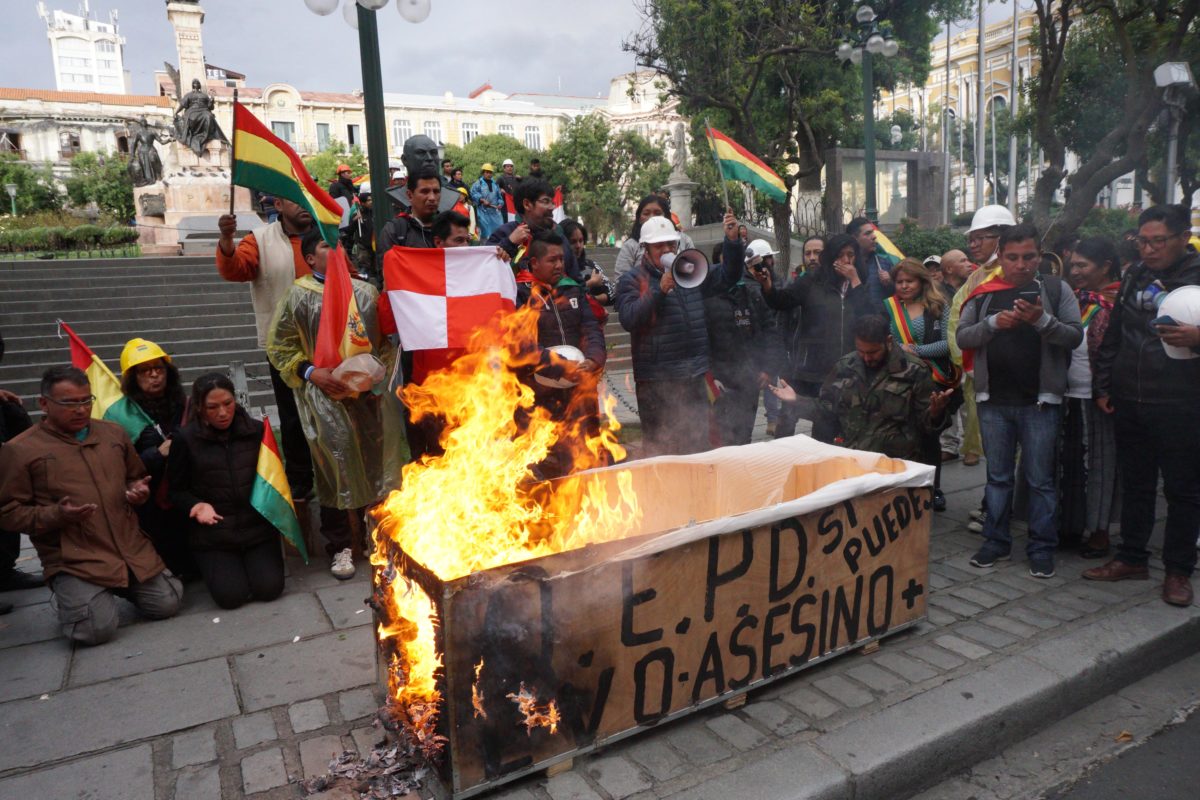 Amidst mobs, looting, and violent attacks, President Evo Morales of Bolivia resigned yesterday after losing both the support of the police and the military. Mobs supporting Morales and his opponent Carlos Mesa, have been wreaking havoc since the election on October 20th.

Everybody needs to watch this video. Horrific.

Masked members of Bolivia's rightwing opposition assaulted Patricia Arce (the mayor of Vinto), dragged her through the streets barefoot, covered her in red paint, & forcibly cut off her hair.

Some police officers remain loyal to Morales, however due to conflicting orders from their commanders they have been prevented from restoring order to the cities (La Paz and El Alto, among others) that have been most afflicted by the mobs and protests. After assailants ransacked and destroyed his home, Morales and his sister fled the capital. They remain in Bolivia, about 200 miles east of their former residences.

The squalid US-backed fanatics of the Bolivian right ransack the house of the country’s elected president, Evo Morales. And the havoc is just beginning. Let no one call them “pro-democracy.” pic.twitter.com/rwwvOSAEaA

Bolivia has now been without a head of state for around 24 hours, and the Bolivian congress is meeting to try and determine who will take up the interim mantle. Alvaro Garcia, Morales’s vice president also resigned, along with both heads of congress. Opposition lawmaker and second vice president of the senate, Jeanine Añez, has claimed that she should be named interim president.

“It falls upon me to assume this challenge with the only objective of calling new elections,” Añez told reporters on Sunday.

Whether members of Morales’s Movement Towards Socialism party, which holds about two-thirds of the seats in Congress, support Añez and show up for the special session remains to be seen.

Despite being forced to resign after General Williams Kaliman (head of the armed forces) read a statement encouraging Morales to do so, Morales reminded his followers in his televised statement that “the fight doesn’t end here. This isn’t a betrayal of the social movements, the fight continues. We are the people.”

But how the hell did this happen?

So glad you asked.

Evo Morales was the first indigenous president of Bolivia – whose population is majority indigenous. He is extremely popular (especially in the more rural parts of the country) and has overseen a major economic upswing for the country.

Initially, having reached his term limits, he was prevented from running again. He sought a referendum to abolish term limits and was narrowly defeated. HOWEVER, the Bolivian Supreme court ruled that the current term limits were unconstitutional and permitted him to run for re-election.

Bolivian elections can run several rounds, and also operate on a two count system. The TREP, or “quick count”, and the official count. The quick count operates in a similar fashion to our exit polls, essentially so that there can be results reported on that evening.

To win in the first round, a candidate needs to get at least 50% of the vote, or 40% and win by 10 percentage points over the next highest candidate.

The OAS (Organization of American States) has been promoting this process and helping to implement it in several countries, including Bolivia.

Unfortunately, having what appears to be two sets of votes can be confusing. Essentially what happened this time.
Before the results of the quick count were in Mesa, Morales’s opponent, was already declaring victory and that he had progressed to the second round.

When the quick count (which usually never reaches 100%) reached around 84%, the electoral authority held a press conference reporting the result: Morales at 45.71% and Mesa at 37.84% (a difference of around 7 points), and stopped the count. This seemed to imply a second round.

This is where the controversy begins.

Please remember the quick count is not the official count.

The electoral authority gave several plausible reasons for stopping the quick count: the official count had started and they wanted to avoid confusion, they promised to release more than 80% of the quick count and they did, and they were investigating the server of one of their contractors.

However, The OAS and Mesa jumped on this. They condemned the Bolivian electoral authority and demanded that they restart the quick count even though national election quick counts never reach 100% because it’s hard to count rural votes in that time frame.

The electoral authority caved to their demands and restarted the quick count (due in part to the pressure from media reports conflating it with the official count.) At over 95% they released the latest results: Morales had 48.86% to Mesa’s 36.72% – a lead of over 10 points. All hell broke loose.

Once again, a reminder that this is not the official tally.

They were immediately accused of fraud by both the opposition party and the OAS, who claimed that the jump for Morales between those two data points was impossible.

The OAS fits trend lines to cherry-picked data to produce graphs like these, and take issue with a lot of ways the quick count was conducted. It’s a bit suspicious to say the least: https://t.co/hFp2rszk4r pic.twitter.com/DNGok75FEt

It’s also important to note that the OAS has been consistently critical of left wing run countries, while turning a blind eye or outright supporting right wing bordering on fascist regimes.

However, The CEPR notes that this jump in favor of Morales was actually not just possible but entirely probable and in trend with the current count and exit polls. This is due to Morales’s popularity in the rural districts which always report later.

But as our paper shows, it’s not only possible, it’s probable. There’s little change in trend between before the quick count was suspended and after it was restarted. https://t.co/s3ShBYGDRv pic.twitter.com/P9FoEGNhpo

When the official count was released it confirmed the quick count: Morales won in the first round 47.08% to 36.51%. This also lines up with pre-election polls which predominantly predicted Morales’s win.

Unfortunately the damage was already done. Opposition members began attacking Morales supporters in the streets, which then lead to retaliatory violence. The OAS demanded an audit. Morales agreed to abide by its results. Mesa did not.

The OAS doubles down and the audit focuses primarily on the quick count (not the official count) and still tries to claim it was manipulated.

They also claim that chain of custody was broken on the official count voting sheets, however this is unverifiable because opposition protestors BURNED DOWN the electoral buildings.

The flawed audit emboldened the opposition who then attacked and KIDNAPPED family members to force resignations.
Morales was forced to abide by the OAS audit results calling for a new election, but ultimately it didn’t matter because the military forced him to resign.

It’s (*extreme sarcasm*) comforting to know that US backed organizations like the OAS enable us to still meddle with socialist leaning South American countries to the detriment of everyone, even in 2019. Happy Military Coup – er – I mean Veterans Day?