Get out there and rock the boat. 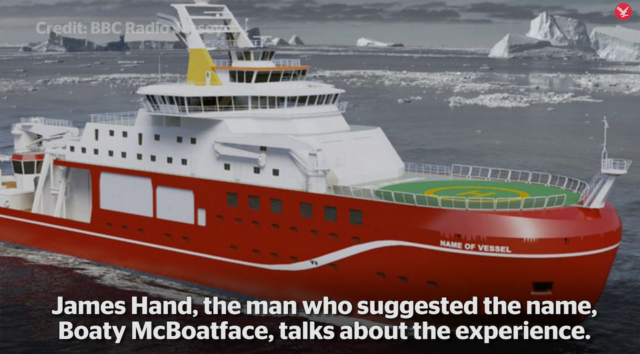 The Natural Environment Research Council in the UK is learning firsthand what happens if you let the internet suggest names for your gigantic, multi-million dollar research boat. Specifically, they’re finding out that they may just end up with a boat named Boaty McBoatface.

Sorry, I had to forcefully stop myself from laughing. I can’t breathe. Okay. Moving on.

So the NERC let the internet suggest names, and for a time, things were fine. They were getting some pretty great suggestions like Ada Lovelace, Endeavour (used in pretty much every sci-fi property ever), David Attenborough, and Falcon. Unfortunately none of these were good enough to beat out the current overwhelming frontrunner, Boaty McBoatface. Even the other “cheeky” suggestions can’t beat out the McBoatface: “It’s bloody cold here, Usain Bolt, Ice Ice Baby and Notthetitanic,” according to the Independent.

The man who suggested Boaty McBoatface has gone on record to apologize for suggesting the name. I have no idea why he felt like apologizing, but whatever floats your boat I guess.

Unfortunately, the terms of this “voting arrangement” say that ultimately, the NERC can elect to name the boat whatever they wish. So it could very well turn out that Boaty McBoatface will be nothing more than an informal moniker for the research vessel. Still, no matter what it’s called, we’ll all know what that boat is and will forever be: Boaty McBoatface.

You can head on over to the NERC’s voting website to vote for Boaty McBoatface yourself. Or you could, you know, vote for another name. But why would you do that?