See yourself out if you disagree. 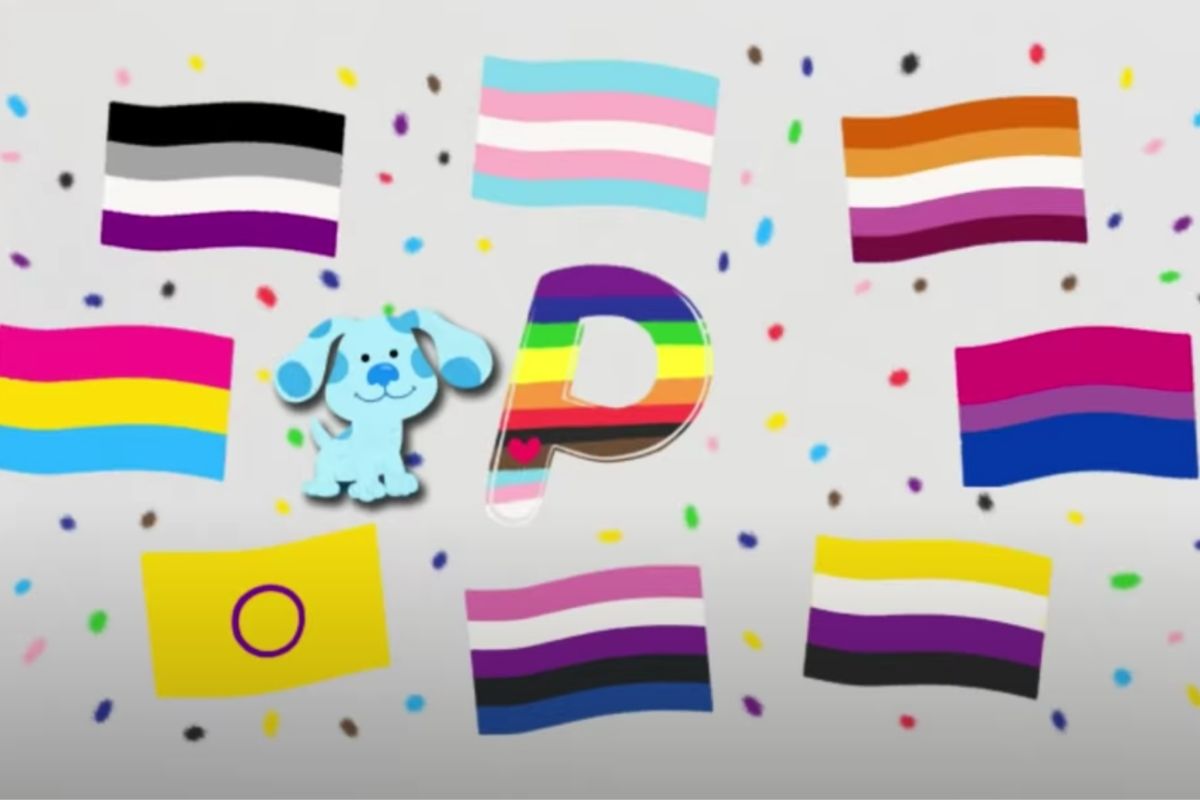 When I heard that Nickelodeon’s Blues Clues and You acknowledged the LGBTQ community, I thought they had done it in a sly way. You know, a way where people can feel represented but if the network is asked about LGBTQ representation they can deny it, wave it away, or leave it open to interpretation. *Cough* Korrasami *cough.*

So, I was sure I knew what I was getting into when I looked up the Alphabet Song for Kids that everyone was talking about due to the P being for “Pride.” Oh, how wrong I was.

Nickelodeon didn’t give us LGBTQ representation on the sly. They put it right there in your face and didn’t hold back. They had a large P with the colors of the pride flag. And surrounding it were other flags (starting at the top and going clockwise in the image above) representing the transgender, lesbian, bisexual, nonbinary, genderfluid, intersex, pansexual, and asexual communities. Some of these flags even I didn’t immediately recognize, and if I can learn all of this in my 30s, imagine what a child could do with such knowledge?

Representation changes lives for the better. It’s an opportunity to feel seen, loved, and acknowledged for who you are. That’s why it’s so important that Blues Clues and You included “Pride” in their Alphabet Song. Children will now have the knowledge that there is nothing wrong with being part of the LGBTQ community. They will go, “Hey, if Blue and Josh accept people for who they are, then maybe I can accept myself or my friend for who they are.”

Okay, maybe kids wouldn’t say it in this exact manner because they’re kids, but the sentiment stands.

Watching the Alphabet Song for Kids also made me reflect on what seeing this kind of representation would’ve done for me as a kid. It would’ve helped get rid of years of self-loathing, confusion, and shame for loving who I love in the way I choose to. It also would’ve made me hide less than I did when it came to my sexuality. Because everyone watched Blues Clues at my age, and if you said anything against her or Steve, you were looked at with horror, and I’m not the only one self reflecting on what this representation means to them as an adult.

Thank you so much! Seeing the pansexual pride flag makes me feel so valid. I’m sobbing. Blues Clues will forever hold my heart. I’ve loved it ever since I was little because of how progressive and inclusive it was then, and I’ll forever love it. Thank you. 💖😭💖

if you told me i would be crying to a blues clues video when i was 21 i probably wouldn’t have been surprised but if you told me it was because they had P stand for Pride and showed like all the flags I would have definitely been a little shocked.

As someone who was obsessed with blues clues as a kid (i actually cited it as my dream job when i was like 6 which wow how does that even work) the pride shoutout is so amazing!!!

As someone who grew up watching blues clues as a kid, seeing this especially for me the pride one? Honestly I’m almost in tears this means SO much. Blues clues was arguably one of the very few positives in my childhood and seeing this now just makes my heart hurt in a good way https://t.co/7S3YMedMWg

Blues Clues was my JAM when I was a kid, and this warms my heart
There are a lot of underrepresented pride flags here. Right smack in the middle of an important song in a kids show.
I really wish I had stuff like this as a kid. Maybe I wouldn’t have questioned myself for so long https://t.co/tzpzzY45xa pic.twitter.com/NE01a80jR0

Having Blues Clues make me cry today was not on the agenda. I loved this show so much growing up, having that Pride bit made the child in me very excitedly say “THAT’S MEEE!!!!” 😭 https://t.co/0ZOzcxEECP

[clutches chest and lies down] i cant handle this its so cute @nickjr thank you from the bottom of my heart for pride (and all the inclusivity!!!) in the blues clues alphabet song, i loved blues clues as a child and i’m so happy to see this sort of support aimed at children!!

(image: Nickelodeon/Blues Clues and You)