Donald Trump Nominated for Nobel Peace Prize, This Really Is the Worst Timeline 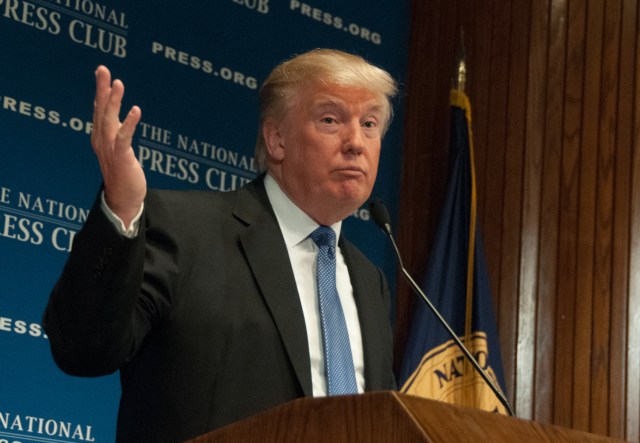 There’s a lot of places we’d love to see Donald Trump’s name: a dumpster, in the recycling bin after he loses the Republican nomination, or even as the  hahaha okay we got that last one. But where we never really expected to see Trump turn up was on a list of nominees for the Nobel freakin’ Peace Prize. Go ahead, let that sink in for a moment. Then head to the bathroom because you’re going to throw it back up.

I’m going to say up front: thousands of people are responsible for seeking out possible nominations, and it’s (extremely) unlikely Trump will actually win a prize. Each of these nominators sends in their nominations, and then another group of people works to narrow down that list. Trump ended up on the list thanks to an unnamed US nominator, who wrote that he’s nominated thanks to “his vigorous peace through strength ideology, used as a threat weapon of deterrence against radical Islam, Isis, nuclear Iran and Communist China.”

Despite the fact that there’s no way he’d win one, it’s still kind of stunning to think that someone on a panel of nominators thought that Trump might make a good candidate. According to the official Nobel Prize website, only the following people are allowed to nominate folks for the prize:

As disturbing as it is to think that Trump’s name now resides on a nominee list alongside “Pope Francis and a campaigner for Isis rape survivors,” according to The Independent, it’s reassuring to know that there’s absolutely no way he’s getting a Nobel god damn Peace Prize, just like how he’s not going to win the Presidency… r… right?