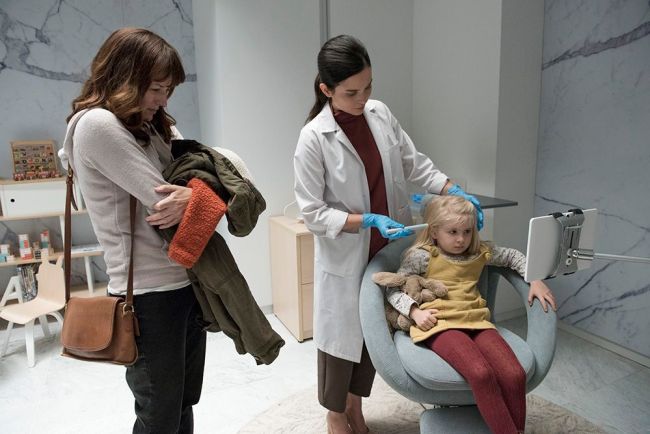 The audience for NYCC’s Black Mirror panel arrived right on time for Good One: A Podcast About Jokes Live! With Special Guest Wyatt Cenac. That NYCC had scheduled Vulture‘s comedy podcast as an opening act in room 1A06 for the Emmy award-winning Netflix series—and the suggestion that perhaps the room’s audience was not there specifically for the podcast was the running gag of Cenac’s interview. At one point, Cenac told a story that not-so-subtly segued into him recapping the events of Black Mirror’s pilot episode, The National Anthem.

Cenac and host Jesse David Fox put on an entertaining performance well-suited to the audience as Cenac discussed his background as a comics fan and his childhood friendship with popular writer Brian K. Vaughan, but there was no denying that they too were fans of the topic of the upcoming panel. Cenac concluded the interview by offering his writing services to Charlie Brooker in case Brooker was already in the room. “I know you worked with Rashida Jones,” he said. “I have a computer.”

As Brooker stepped on stage with Black Mirror co-creator Annabel Jones, he was introduced by none other than Jodie Foster, who directed the episode “Arkangel” in the upcoming fourth season and moderated the panel. When Foster began a conversation about the new season, the panelists first discussed their difficulty in even having a discussion.

“It’s a tricky show to promote, because there aren’t any recurring characters,” Brooker said, “and also because you kind of don’t want to know specifically what’s going to happen. It’s kind of like a box of chocolates: you don’t know what the filling is going to be exactly, but you know it’s dark chocolate.”

Despite that reluctance to get into specifics, Foster began to describe some of the thinking that went into her episode. She wondered, “Where will America be in twenty years?” and imagined that “America might be struggling financially, that opportunities were lost, that in our community lives we’d gone back in time.” She surprised and delighted the audience by following that with an extended clip from the episode, including a scene that establishes its high concept, which could be described as (and you should probably skip the rest of this paragraph if, like Brooker, you agree that it’s best to go into episodes blind) what if helicopter parenting, but too much? In the episode, Rosemarie DeWitt stars as a mother who uses a tablet synced to an implant in her daughter’s head which DeWitt can use to manipulate her daughter’s vision. The idea seems to follow a familiar Black Mirror formula, echoing concepts from previous episodes including “Men Against Fire,” an episode which the “Arkangel” clip explicitly referenced.

When Foster asked about Brooker and Jones’ thoughts behind episodes referencing each other, Jones first joked about that being “laziness,” a reuse of props and product designs, but Brooker then suggested that the fourth season will have even more interactions between episodes. “We turned on the Easter Egg hose,” he joked.

The panel also brought up a few less-spoilery details about the fourth season. The “Black Museum” episode will be, according to Brooker, “three episodes in one, Russian doll style,” which makes it similar in structure to Black Mirror’s earlier Christmas episode White Christmas. The longest episode, “USS Callister,” will be 74 minutes long, while the shortest episode, “Metalhead,” will be around half that length. Brooker likened the latter episode to a “punk single.”

Brooker also made references to early drafts of past episodes, including a version of “Hated in the Nation” that replaced the bees with “a giant robot like out of Pacific Rim,”  and that his original conception of “San Junipero” featured a heterosexual couple. He decided upon depicting a same-sex couple when he realized that there would be greater resonance for the characters to get married in their simulated 80s world if their marriage wasn’t legal in the real world of the 80s.

Toward the end of the panel, an audience member asked Foster about her varied experience across television and film, and Foster took the opportunity to talk about the changing landscape of gender parity in the industry. When she was young, she said that of the 175 people on set with her, the only other women would perhaps be “the woman playing the character of [her] mother, a makeup artist, and maybe a script supervisor,” but that now there were far more roles for women on and off screen.

As Foster is the first and only female director of a Black Mirror episode, Jones responded to this by expressing a desire for more women directors for future episodes. Brooker observed, “most of our lead protagonists this season are women,” and he explained that after the first season of Black Mirror featured only male protagonists that he had “gotten sick of just writing the same guy.” Hopefully we’ll be seeing even more variety in season four, which has not yet been given an official release date—but considering that “USS Callister,” a play on Star Trek, is being called “the Christmas episode,” the new Black Mirror could be fast approaching.

Here’s the season four trailer if you need more reasons to watch:

Zachary Garrett is a cartoonist and software engineer in Brooklyn, NY. He is never on Twitter.