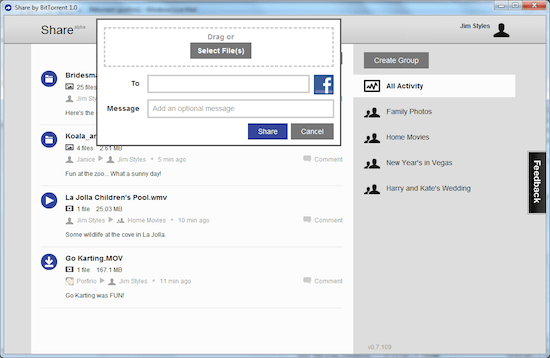 Instead of the traditional seeding and torrent tracking, Share allows users to simply select the files they want to share, indicate the recipients, and hey-presto, the file(s) begin transferring. The trick is that Share caches the files on the cloud, thanks to the Amazon EC2 and S3 services, so that the parties need not be online at the same time to complete the transfer. Presumably, once all the indicated recipients download the file, it is removed from the cloud.

The practical upshot of the whole thing is that BitTorrent can offer a fast, effective way to move files without size limits.

With this new tool, BitTorrent seems to be targeting the growing number of people who have large files — such as home videos in HD or enormous libraries of snapshots — that want to distribute those files privately. Unlike a ripped hit movie, the general public is probably not interested in helping to seed such files and the recipients probably wouldn’t want their home movies being sent around to strangers anyway. Share is, in effect, a totally new tool from BitTorrent with a completely different audience in mind.

The service is currently available in an alpha stage of development and only for Windows users. Mac users can try out the service in an alpha release of µTorrent, with future versions expected to have such file sharing capabilities baked in. However, BitTorrent apparently has big plans for expanding the service. According to Gigaom, BitTorrent Chief Strategist Shahi Ghanem is interested in building its own fully-fledged P2P sharing service based on the cloud. From Gigaom:

The system isn’t up and running yet, but the idea is that users will receive free storage for their files by sharing some hard drive space and bandwidth with other users.

While BitTorrent has survived the kind of attacks that sunk LimeWire and Napster, one wonders if this P2P service might be a bridge too far.