Why Bitch Planet Is Inspiring Women to Get Badass Feminist Tattoos 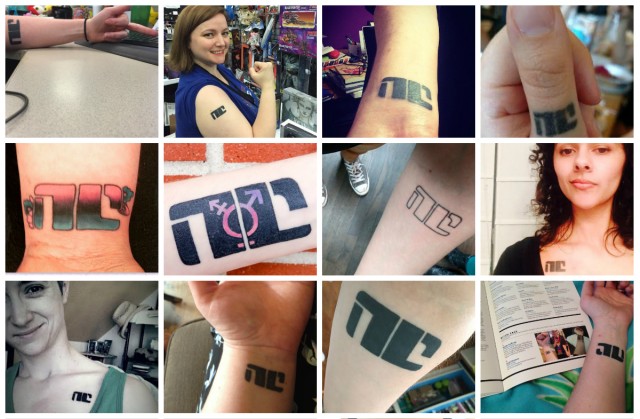 Bitch Planet, Kelly Sue DeConnick and Valentine De Landro’s feminist, sci-fi twist on the prison exploitation genre, is only four issues in, but it’s already inspired a legion of women to permanently brand themselves Non-Compliant. The letters “NC”—in De Landro’s recognizable design—are tattooed onto the inmates of Bitch Planet, an interstellar prison for women who have been deemed Non-Compliant by the very literal patriarchy that runs the Earth.

On Bitch Planet, the answer to “What are you in for?” could include theft, assault, cheating on your husband, refusing to conform to rigid beauty standards or engaging in gender terrorism (I don’t know what that is, but it sounds awesome).

Soon after the first issue hit stands, the NC logo became a rallying cry for women who are too brash, feminist, opinionated, angry, fat, dark-skinned, queer, gender-non-conforming—or in a word, “non-compliant.”

“We live in a world where we are constantly labelled, and being able to label myself as non-compliant gives me free reign to live without worrying what people think of me and stop from being held to society’s current standards and their labels. Getting the tattoo, for me, was me getting a permanent reminder of that,” says Liesl Dittmann, 22, a genderfluid telecaptioning assistant and comic shop worker in Utah. 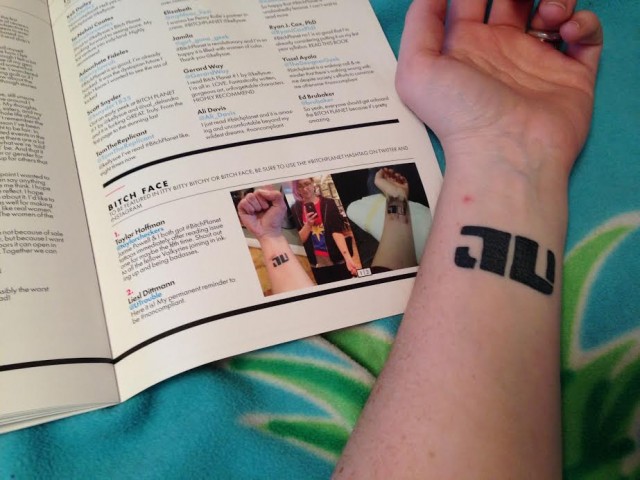 Emily Mills, a queer woman in Madison, Wis., and editor of LGBTQ magazine Our Lives, calls her NC tattoo a “badge of fucking honour.”

“My whole life has been me living unapologetically as who I am, and that has come with many, many consequences—people and institutions trying to shame me, punish me, dismiss me, or worse,” Mills said.  ​”(It was) a rare impulse decision for me, but one I don’t regret in the least.”

Riot New Media Group’s Rebecca Joines Schinsky got hers after a “super extra-shitty week on the Internet that involved excessive harassment” and someone setting up a fake Twitter account to impersonate her. “It was clearly intended to silence me, and addressing it head-on was scary, but I had to. That week, I became sure I wanted the NC tattoo. In my life online, I’ve been branded as all kinds of things: Bossy, snobby, know-it-all, un-cooperative, bitch, slut, whore, and once, memorably, ‘the #1 cunt,’” she says.

“So I got the tattoo in order to have a mark of my own choosing. It’s an acknowledgment that I know how some people perceive me, and a giant middle finger to the suggestion that I should sit down, shut up, and start acting like a lady. A dear friend and co-worker who also deals with harassment online and is a fan of the comic and I went to get our tattoos together.”

Lisa Olson, who works at a games and comics shop in Saint Paul, Minn., got hers with with friends, too—four of them, in fact—all members of a women’s comic book club.

“I’ve always been non-conformist, liberal to a fault, and would be horrified to think I could become an adult with the doubts that are just unavoidable in Western Culture. And yet, at the second or third meeting of the Girls Only Comic Club I attended I realized how desperately I’d always wanted that space,” she says.

“I grew up a tomboy, I’d always had mostly guy friends and I’d never think of myself as anything less than an independent, modern woman, but lucking into this community of the self-identifying ‘non compliant’ was shockingly emotional. There’s no way to describe what an intense feeling of relief it was.” 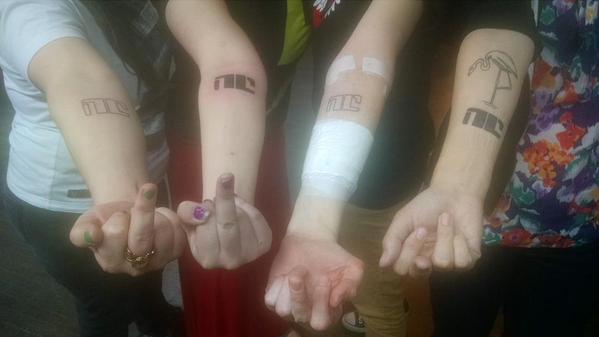 Girls Only Comic Club get inked at C2E2 in Chicago. Picture via @EotUcomics

Andrea Brown of Happy Harbor Comics in Edmonton was inspired to get inked by Issue 3, which centres on character Penny Rolle, whose greatest crime—aside from a handful of aggravated assaults—is exuding a joyful and unbreakable confidence in her big, black body.

“Penny Rolle’s story really struck a chord. I’ve recently started to love myself after many years of self-loathing and this was the issue that finally made me say, ‘Alright, I’m proud of who I am, and don’t care about society’s ideal woman, there’s people who love me. *I* love me, and that’s the tipping point for why I got the tattoo.”

Many have taken the original design and given it a personal twist, like Aria Burrell, a Calgary computer software engineer and activist whose NC tattoo includes the transgender symbol.

She adds: “Imagine my middle fingers firmly raised while saying that for full effect.” 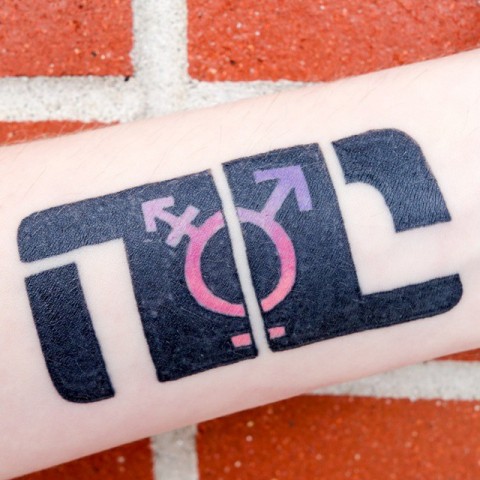 Sarah Corn, a student and comic book shop clerk in Seattle, started saving her for tattoo after she read Issue 1. Hers, too, is an original take on the logo, incorporating elements from DeConnick’s Captain Marvel series. She sees it as a reminder of the strength it took to quit her high-paying job in the tech industry and carve a new path for herself.

“I submitted myself to a decade’s worth of curtailed ambition and gaslighting at the hands of the IT industry, allowing myself to be convinced that my emotionality, my sensitivity, and the tone of my voice disqualified me from respect,” she says. “The Non-Compliant symbol on my arm represents my personal epiphany that exactly none of that is true. The NC reminds me to trust in myself, and to relish my empathy and exuberance as my greatest strengths.” 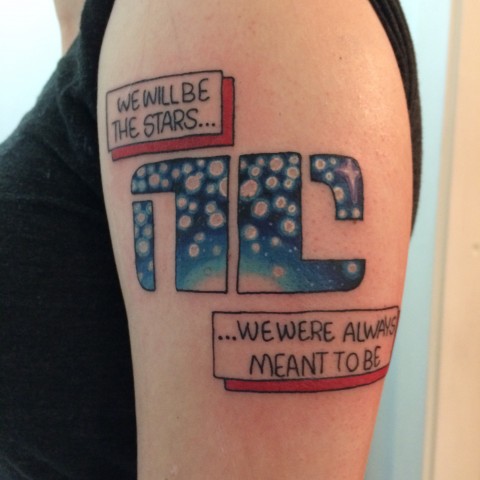 But almost as quickly as the NC tattoo phenomenon took off, it sparked a backlash, mostly from men, in the form of concern trolling. As DeConnick explains in the back of Issue 4, certain unnamed “gentlemen on Twitter” had gone on “muti-tweet tirades” about how these ladies ought to be careful because the comic is so new, and tattoos are so permanent.

“I saw that, and it made me laugh,” says Jenn Northington, events director for Riot New Media, who has the tattoo and recently did a survey of other women who have them, too.

“Do they think I am unaware that the comic is brand-new? Or that it’s not done yet? Or that it could stop coming out tomorrow? HOW DOES PUBLISHING WORK, PLEASE TELL ME. And the vaster point of the tattoo is that it’s for me. The next issue of Bitch Planet could never come out, or I could hate it, but that wouldn’t change the fact that the first few installments have articulated something very important about feminism, and have validated my experiences in a deeply meaningful way.”

DeConnick herself has repeatedly defended the tattoos from the haters, including in a poignant essay in the back of Issue 4, in which she nails the point home—”it isn’t about the book.”

**More than a dozen people spoke to The Mary Sue for this piece, and although they were all awesome, we couldn’t fit them all in. If you want to read their stories, check out this Google Doc.

Sheena Goodyear is a non-compliant Toronto-based reporter and copy editor who works for Sun Media. You can find her on Twitter at @SheenaGoodyear or Tumblr at TheSkortingLife. She was so moved by the women in this article, she’s thinking about getting an NC tattoo herself.