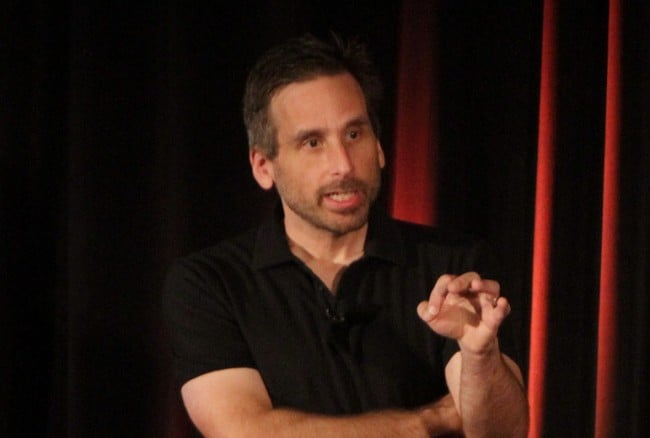 Ken Levine is the creative director and co-founder of Irrational Games. He is known for his work on the Bioshock franchise, Thief: The Dark Project, and System Shock 2. Ken and I connected on social media, even though we live in the same state. He’s a legendary person (like a rare Pokemon!) in the video game world, but he’s really down to earth, and I appreciate how honest he is about his own mental health.

TMS: If you could inject yourself with any plasmid, which one would it be and why?

TMS: Game Informer named you one of the “storytellers of a decade,” but I want to know what that means to you. What inspires you to create? How do you feel when you create? What kind of things do you like to write about?

Levine: I think I’m like any other writer: I create stuff because that’s what I’m wired to do. Creation is either one of the worst experiences (when it’s going poorly) or one of the best. At its best, it’s an escape from worry. I just finished a screenplay that I wrote on nights and weekends over a period of 3 months. One of the best experiences of my life. I didn’t show it to a soul when I was writing it. I didn’t talk to anybody about it. I just lived in that world. I loved getting to know the characters. I loved figuring out the story, which is sort of like a complicated puzzle to solve.

When it’s going poorly it can be rough. That little voice in your head that says, “Dude, you suck.” That voice can get pretty hard to shut down. The best antidote is to say, “Okay, have I been in this situation before? Have I been able to sort it out before?” And when you realize the answer is yes, you can shut down that voice in your head. But it’s not always easy.

TMS: What are some of your favorite video games? Is there one video game you consider perfect or near-perfect?

Levine: I tend to really fall in love with RPGs and strategy games. So Civilization, Xcom, Dark Cloud 2, Fallout 3, World of Warcraft. I think the best game ever made is probably Civilization. I’ve played every iteration of it.

TMS: Where did the idea for Bioshock come from?

Levine: It came from a lot of places. The first idea that I would say that really made it BioShock came from watching a nature show. A scene involved some predators hunting some prey. And then the prey’s mama swooped in and saved her younglings. I realized that dynamic is imprinted upon us, the nature of those relationships is clear without words. The love between protector and protected, the threat of the predator. Seemed like a really cool AI relationship that we hadn’t seen a lot before in games. First glimmer of Big Daddy and Little Sister.

TMS: Who’s your favorite character in the Bioshock franchise?

Levine: Elizabeth from BioShock Infinite. No doubt. I don’t have kids. (Well, I have a dog, and he’s our baby). So Elizabeth is my daughter. If I had a child, I hope she would have the courage and the kindness of Elizabeth.

TMS: What kind of role do landscapes play in the Bioshock franchise?

Levine: Rapture and Colombia are so characterized. Environments are one of the things that games do better than any other media. So instead of doing lots of non-interactive cutscene (story) sequences where the viewer was passive, we wanted to let the gamer drive their interaction. So we put most of the story in the world and let the player find that story and make it her own.

Levine: We put her through the ringer. But what makes Elizabeth so special is that she’s better than the people who try to traumatize her. She doesn’t let them change who she is. One of the most pernicious aspects of oppression is that it can turn the victims into oppressors. Elizabeth’s challenge is to rise above her oppressors, to be better than them.

TMS: You’ve written some great social media posts about mental illness. Do you think video games can help people with depression, anxiety, and so on?

Levine: From my very anecdotal evidence (meaning my own experience and the experience of lots of gamers I talk to) games are often a way to work through pain. A game called Heroes of Might and Magic got me through one of the roughest periods in my life. I know that sounds strange, but there it is. I think BioShock has helped a lot of fans through rough times because the games themselves are so dark. Some people use darkness to deal with darkness. Some sad people crave “Singing in the Rain.” Others crave dystopian underwater cities.

My writing tends to deal a lot with the sense of self; who is this character I’m playing? How well do they know themselves? I think that’s because I feel a bit like an alien in my own skin. What’s the gulf between the person we think we are and the person we actually are?

TMS: Do you have any advice for future storytellers?

Levine: The same old boring crap you’ve heard a million times before. Writing is rewriting. A writer writes. And be fearless. Some people are going to hate what you write. It’s going to make some of them mad. In the end, you have to write for yourself. You’re the first audience, and if it doesn’t work on you, it’s not going to work on anyone.

TMS: Is there anything else you’d like to add?

Levine: I’ve spent a fair amount of time on Facebook and Twitter (@iglevine) talking to people with depression, anxiety and OCD. I’m pretty open about my experiences with those things, so if you ever need to bend a stranger’s ear who’s had similar problems, I’m a pretty good non-judgmental listener on these topics.