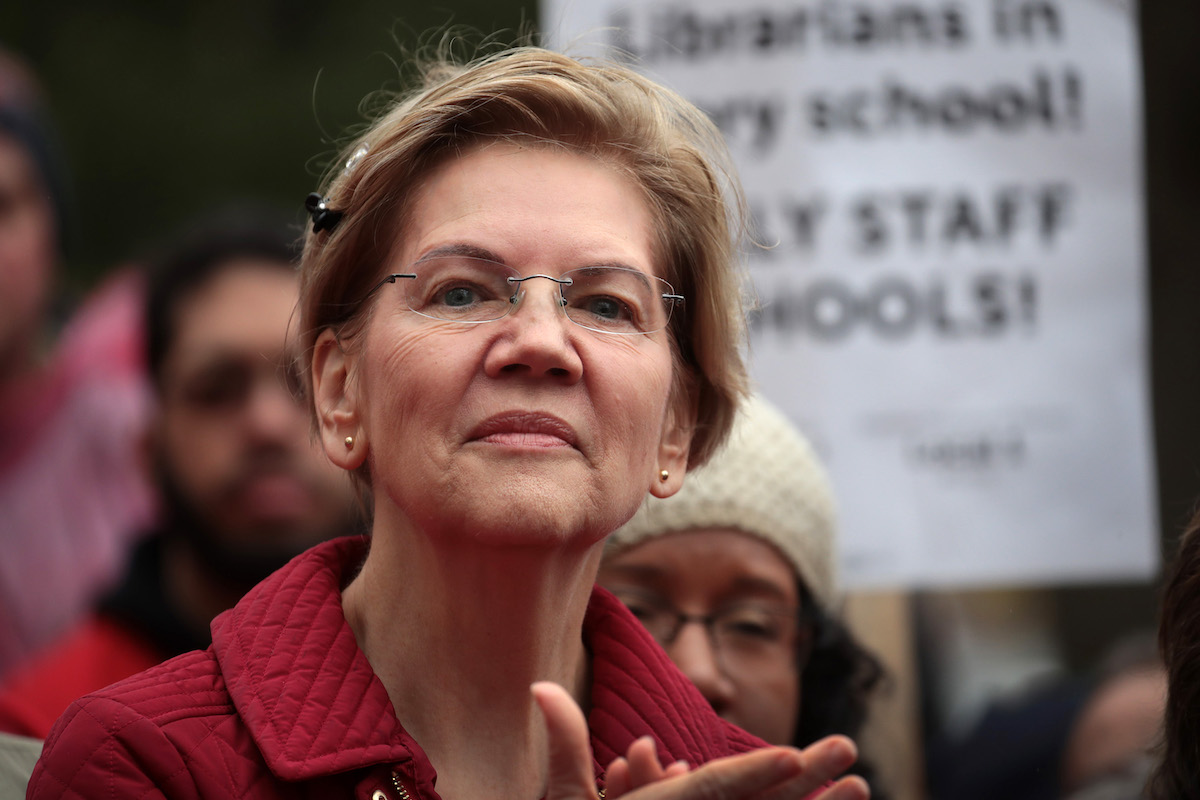 The ultra-wealthy have been expressing their fear and anger regarding the chance of an Elizabeth Warren presidency for a while now. But this week, Wall Street billionaire Leon Cooperman took that emotion to a new level when he literally starts tearing up during an appearance on CNBC’s Fast Money Halftime Report.

Cooperman praises Trump’s job with the economy, but says he doesn’t find him “presidential” and thinks he shouldn’t run for reelection unless he’s willing to “change his dialogue.”

But if the only other option is someone like Warren or Bernie Sanders who is, as he sees it, “trying to make bogeymen out of wealthy people,” well, that’s enough to make a billionaire super sad. He’s just crying, he says, because he “cares.” (About his own money.)

One thing I know he cares about—his fortune. He’s a shareholder in Navient, a student loan company that has cheated borrowers and used abusive, misleading tactics. He even went so far as to ask how I might impact his investment in the last earnings call with Navient. https://t.co/77UU8vQE1G

Cooperman isn’t the first billionaire to go public with their Warren fearmongering. JPMorgan CEO and chairman Jamie Dimon doesn’t like Warren’s hurty words. “She uses some pretty harsh words, you know, some would say vilifies successful people,” Dimon told CNBC recently. “I don’t like vilifying anybody. I think we should applaud successful people.”

Y’all, the billionaires are asking for a safe space – you know, in addition to the entire US economy and political lobbying industry. https://t.co/oJR8SZz9gJ

A number of billionaire investors have warned that if Warren were to become the Democratic nominee (not even if she were elected to office), it would be disastrous for the stock market. Hedge-fund titan Paul Tudor recently told a New York investment conference that if Warren is elected, the S&P 500 could fall by a full 25%.

Cooperman has also previously said, “They won’t open the stock market if Elizabeth Warren is the next president.” He walked that statement back in that CNBC clip above, though, saying, “If they opened the stock market after 9/11, they’re going to open it no matter who wins the presidency.” So there you have it: Elizabeth Warren is not as bad as 9/11, says one billionaire.

Now Bill Gates has added his voice to the wealth chorus complaining about how the mean lady wants to take all their money.

At the recent New York Times DealBook conference, Gates–who has an estimated worth of $107 billion–expressed some distress over Warren’s ultra-millionaire tax, which would tax the wealth (not income, because billionaires have a way of hiding, hoarding, and misrepresenting income in a way that can have them pay a severely disproportionately low amount in taxes) of those people at a rate of 2% annually after their first $50 million and 3% after their first billion.

“If I had to pay $20 billion, it’s fine,” Gates told the crowd (adding less than convincingly that he was “just kidding”). “But when you say I should pay $100 billion, then I’m starting to do a little math about what I have left over.”

That’s … not how that math works out but it’s fine, it’s not like Gates is known for his mental prowess or anything.

bill gates dumb as hell, pass it on https://t.co/boQc29Mwky

Even if it were the right math and he had to pay $100 billion, Bill Gates would still have seven billion dollars left over, so, you know, bust out those tiny violins.

Except then Gates suggests that he would be open to voting for Trump if Warren were the Democratic nominee, on the grounds of–get this–professionalism. *smashes violin into a million pieces*

“I’m not going to make political declarations,” Gates said (via Gizmodo). “But I do think no matter what policy somebody has in mind […] whoever I decide will have the more professional approach in the current situation, probably is the thing I will weigh the most. And I hope that the more professional candidate is an electable candidate.”

“Electable” is a nonsense word. And Gates is working hard to make “professional” one too. Because if Gates finds someone’s desire to take a reasonable percentage of his ONE HUNDRED AND SEVEN billion dollars to be more “unprofessional” than anything Trump does all day, any and every day, than professionalism isn’t something he actually cares about. What he cares about is controlling the sort of wealth that it is literally impossible to amass without stepping on a whole lot of people.

Elizabeth Warren took to Twitter Wednesday to make an offer to explain math to Bill Gates.

I’m always happy to meet with people, even if we have different views. @BillGates, if we get the chance, I’d love to explain exactly how much you’d pay under my wealth tax. (I promise it’s not $100 billion.) https://t.co/m6G20hDNaV

I’m always willing to talk about creative solutions to these problems.

But also, Bill Gates said he’s open to voting for Donald Trump, so his goodwill and benefit of the doubt is all used up in my book!