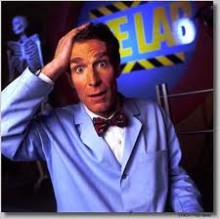 Speaking with Popular Mechanics, educator and beloved childhood idol Bill Nye had some interesting thoughts on science education in the U.S., and particularly how the politicization of teaching evolution in classrooms hurts American students and hamstrings good teachers.

[Teachers are] doing their job but they’re under tremendous pressure. The 60 percent who are cautious—those are the people who are really up against it. They want to keep their job, and they love teaching science, and their children are really excited about it, and yet they’ve got some people insisting they can’t teach the most fundamental idea in all of biology. There’s the phrase “just a theory.” Which shows you that I have failed. I’m a failure. When we have a theory in science, it’s the greatest thing you can have. Relativity is a theory, and people test it every which way. They test it and test it and test it. Gravity is a theory. People have landed spacecraft on the moon within a few feet of accuracy because we understand gravity so well. People make flu vaccinations that stop people from getting sick. Farmers raise crops with science; they hybridize them and make them better with every generation. That’s all evolution. Evolution is a theory, and it’s a theory that you can test. We’ve tested evolution in many ways. You can’t present good evidence that says evolution is not a fact.